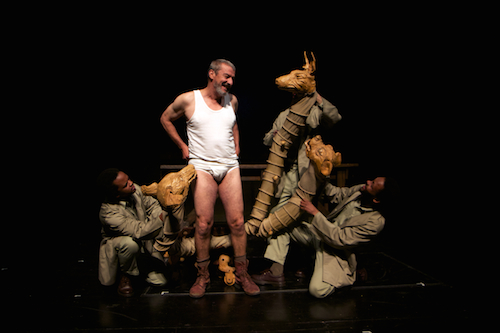 Written by Jane Taylor, directed by William Kentridge, and produced by the Handspring Puppet Theatre (War Horse), Ubu and the Truth Commission is a large scale production created by some of South Africa’s biggest names. Revived for the 2014 Grahamstown National Arts Festival in celebration of South Africa’s 20 years of democracy, Ubu and the Truth Commission has since been on a world tour that brought it to Canadian Stage’s Spotlight on South Africa festival as a well honed and flawless production. This play, originally produced during the early years of South Africa’s Truth and Reconciliation Commission (TRC) makes use of verbatim TRC testimony and archived descriptions of police violence that are juxtaposed with live acting, puppetry and projected animation. Ubu and the Truth Commission can be read as satirical commentary on the way the TRC acted out the hopes and fears of a nation coming to terms with a recent trauma, however, the production’s suggestion that some of the most notorious architects of apartheid era violence would use the commission to escape retributive justice proved to be too close to the truth.

Through stark depictions of torture and abuse, the action focuses on two concurrent storylines, one the relationship between Ma and Pa Ubu (modeled after Ubu Roi, Alfred Jarry’s grossly sadomasochistic character of the same name), and the other between Pa Ubu and the state—Pa Ubu represents the upper brass enforcement of the Apartheid regime. He has blood on his hands. The script plays on double meanings, layering the personal home relationship between Ma (Busi Zokufa) and Pa Ubu (Dawid Minnaar) with the complexity of the State mandated Apartheid violence.

Establishing the role of injured wife to her philandering husband, Ma Ubu expresses anxiety over her sexual relationship and intimate connection with Pa Ubu, highlighting an internal relationship of control and withheld intimacy, these concerns are set up as farcical beside the depictions of torture that the red (blood not lipstick) on Pa Ubu’s collar signifies. What is perhaps the most troubling in a play that deals with such stark depictions of torture and abuse, is how these corporeal interactions became eroticized through the troubled relationship between Ma and Pa Ubu.

Pa Ubu’s closest confident is Brutus a three headed dog with a briefcase for a body. Masterfully manipulated by three puppeteers (Gabriel Marchand, Mandiseli Maseti, and Mongi Mthombeni), Brutus acts as loyal companion eager to do Pa Ubu’s bidding. The three heads, representative of the government, the military, and the police/soldier henchmen, act together as one. There is the sense that as long as Ubu takes care of Brutus, Brutus will in return take care of Ubu, their relationship is contentious and the inevitability of secrets being leaked out lends an air of desperation to Ubu’s character. When Ubu and Brutus are later forced to admit to their atrocious acts at a TRC hearing it is interesting to note that each head receives a different sentence correlating to their own accessibility to social privilege, further calling attention to the many hierarchal disparities that made up the cultural and political frames of the apartheid system.