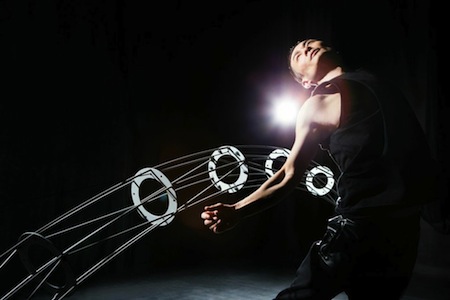 The project that William Yong has undertaken with Zata Omm Dance Projects and an inspiring network of supporters is truly monumental. An experiment in sustainability of theatre (and artists), vox:lumen brings awareness to current issues of conservation in a beautiful and poignant way.

The pre-show lobby is full of energy, jitters, and smiles, which are exactly what is harvested for the show. The audience is invited to ride stationary bicycles to charge batteries used in the performance, spin handles to illuminate lightbulbs, and even get a phone charge from a solar panel station. Dancers and audience alike, along with a helping hand from the day’s sun, provide all the energy for lights and sound on the stage.

The content of vox:lumen is compelling and thought-provoking on top of the sustainability narrative. The dancers float in an uncertain time, post-apocalpytic even, where the disaster of humans’ inherent greed has caused a “post-light world”. With wind-up powered flashlights, the dancers are able to illuminate each other, choosing carefully what to show. This intentional action lets the viewer reflect inwards, how every movement we make in everyday life is hardly economical at all. With these handheld lights, one of the most striking images falls at the beginning, when one dancer sits, erect, eyes closed, and another projects an image of a face onto his. The projected woman speaks, telling of a bleak future, with no light, where “old images of the light world” cause psychological suffering. The piece continues with this close, personal relationship with light, used both as an idol and a method of torture.

William Yong uses a myriad of props and light structures, from handheld flashlights to interactive glowing cubes, lightbulbs in the audience, and a giant copper-wired crescent light source sculpture the dancers can clamber on and into. The message of sustainability is clear, and there is no need for overkill in the technological aspect. Props and aids can add so much to a show, make an extremely pertinent point or image, but flooding the senses with them only makes each one a little less special.

A wonderful aspect of being selective in light use is that it draws attention to other senses that are involved in a dance show. The sound of bodies leaping in the dark, or militant marching feet join the soundscape, making it richer and more tangible. Some sections of the piece lay importance on using touch as the most important sense, as a way to see bodies. I wish this theme had been explored more. There is such a great opportunity here to take the truth, fluidity, and sensitivity in all of Yong’s movements and really explode them into the next level. Touch as sight, as conversation, is something we all know in the dance world, and which was just hinted at in vox:lumen.

Amidst a tortuous and dark world without light, William Yong proves to us that there is still beauty and hope. The resiliency of human nature and the ability to form connections and love in a desolate world is perhaps the benefit of a post-light apocalyptic. Vox:lumen shows us that with relationships and togetherness, we can forge a new way, a new light, and can create a new way of being. As the voice recording preaches at the end of the piece, “The shadow of who we were is leaving us”.