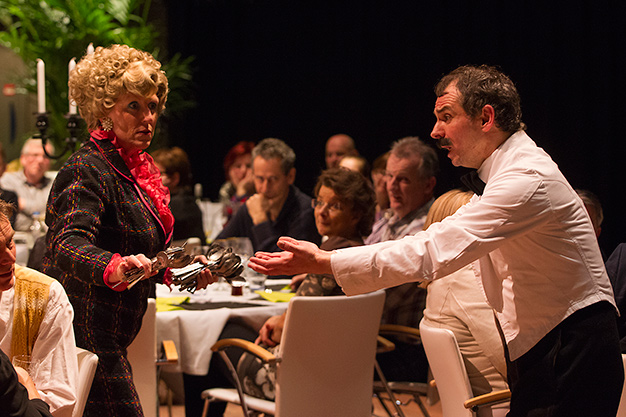 The battleground of Toronto commercial theatre tends to consist of spirited upstarts launching a forward assault on a seemingly impenetrable Mirvish stronghold only to suffer the sort of casualties that only ever results in retreat (unless we’re talking Livent, that was more of a blaze of glory, however inglorious). The latest challenger in the fight for the patronage of tourists and event-theatre types is Corey Ross’ Starvox Entertainment. Starting small and expanding steadily, Starvox is doing a lot right and stands to take a pretty big bite out of the Mirvish market, even if they’re unlikely to ever truly compete for the number one spot simply because they seem largely (and perhaps wisely) uninterested in the truly big-ticket items.

The smartest move the ambitious startup has made is to develop a focused brand. Unlike the aspirational but now defunct DanCap that sought to bring the best of Broadway to town via National Tours (which put them in the most direct of direct Mirvish competition), Starvox is setting their sights slightly lower, packing the house at the smaller Panasonic Theatre for a pre-Broadway run of Trey Parker’s Cannibal the Musical and letting the bigger company be responsible for the National Tour of Parker & Matt Stone’s massive hit The Book of Mormon. Instead of filling the Sony Centre’s massive mainspace, Starvox is selling high-priced tickets to that venue’s basement where patrons eat mediocre chicken in the interactive Faulty Towers Dining Experience. It’s good business. It’s clever business. Outside the box thinking that’s bound to please some of the more easily pleased tourists while making big profits. But is it the sort of work we want representing our city’s theatrical output? Absolutely not. Or, at least, it’s definitely not what I want.

Faulty Towers: The Dining Experience is painfully broad and remarkably dull despite the gamely performance of Benedict Holme in the John Cleese role. It’s a lot like attending a wedding where you don’t know anyone, the service is terrible, there’s no music, and the soup most definitely came from a can. But, for the sweet older couple to my left, it was both a fun reminder of a TV show they used to love and a nice Christmas present from their daughter who thought a night out in the big city would do her Hamilton-dwelling parents some good. That’s exactly the right target demo for this event (it’s not really a show so much as an event)- people looking for a brainless but unique something to do. Is there room for that in the landscape (provided said innocent patrons aren’t being drastically overcharged)? Absolutely. Is it something I ever want to have to sit through again? Absolutely not.

Cannibal the Musical was more of a troubling experience simply because it more closely resembled one of my favourite elements of commercial theatre- the big, fun musical comedy. I went in hoping for something somewhat like The Book of Mormon (the posters certainly trade in on that name plenty), something funny, silly and fairly simple that definitely dabbles in a brand of humour that’s distinctly not my cup of tea (the Starvox brand veers broad and low-brow; we’re never going to really get along) but which ultimately hits on some honest emotion and basic humanity. You know how South Park (and, to a lesser degree, The Book of Mormon) is broad toilet humour and easy dick jokes layered into genius social insight with a big dash of heart? Cannibal the Musical is Trey Parker’s first major property created without Matt Stone by his side and I came away from it quite convinced that Matt Stone’s contribution to South Park and The Book of Mormon is the “genius social insight with a big dash of heart” part of it all. Maybe it’s a coincidence. Maybe Cannibal just isn’t Parker’s best solo work (not that it’s a solo work; he had like 5 other non-Stone collaborators). But all it is is broad, empty, easy nonsense, as though someone took the heart and the head out of the South Park brand and just left some idiots dressed for winter.

We need someone to keep Mirvish on their toes. Musical theatre is tough business for smaller companies without big tourist revenues (which are harder to come by now that American tourists need a passport) and a little competition in that commercial market will make sure that Mirvish keeps their standards up and their prices halfway reasonable (though I will say I’m impressed by their current season so far, underwhelming Once aside). I would prefer if there was a little bit more art in the entertainment provided by whatever company fills that gap but I fully acknowledge that we have Soulpepper and Canstage and a thousand small companies serving up art all the time. Someone needs to serve the mediocre chicken, I guess. If nothing else, Starvox is beginning to look like a viable, long-term candidate for the second fiddle commercial position and that’s something we really do need in this town.