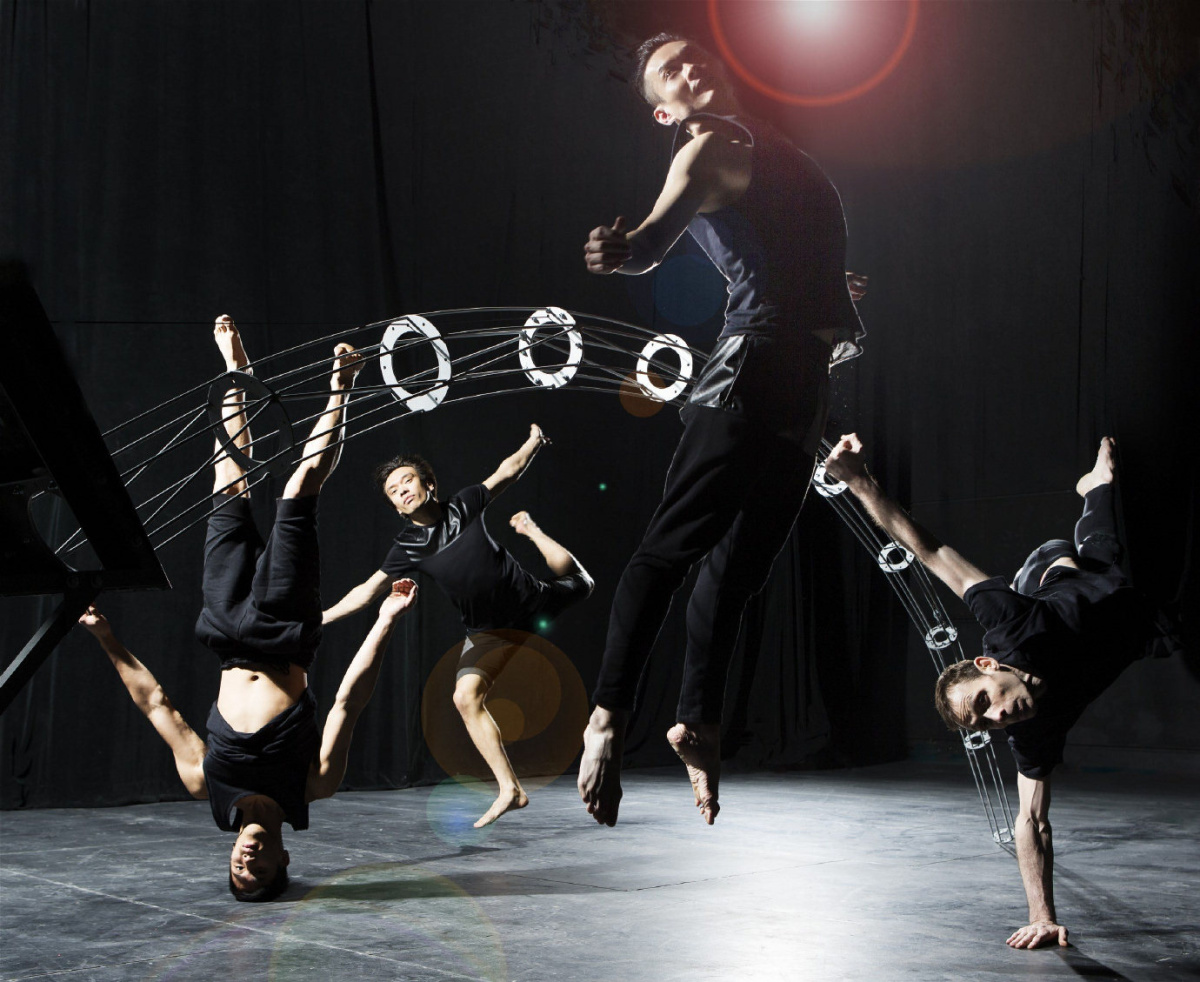 Take Two on vox:lumen– Let There Be Light

It’s hard to know where to start in discussing vox:lumen, which opened at the Harbourfront Center’s World Stage last week. Do we being by talking about the show itself: a dance in the dark that made light a player on stage with dancers lighting each other and themselves from a variety of sources, including flashlights. Do we begin talking about the story, a dystopian post-light world, where the dancers discover light, moving over the course of the show from being shocked and frozen by it, like a deer in the headlights, to drawn and in awe of it, like a moth to the flame. Do we begin by looking at the set, a massive spine-like mast that curves up and across the stage, bursting into a web of nerve endings, or filaments, illuminating the stage at times with flashes, at times with a warm glow. Do we begin in discussing the dancers themselves, five talented male moving bodies, how their musculature is caught in the almost-darkness, how they move through and across each other and the stage with a vulnerability, with a physicality. Do we start with the choreography, which plays with themes of care, of blindness, and of exposure. How their bodies echo each other, how they move like dominos falling, and dance with a precision that is exciting and a freedom that is inviting. Or do we start with the fact that the entire show is powered on four battery packs, operating off the grid, and representing years of research into sustainable performance. However we decide to start, one thing is clear: Zata Omm Dance Projects’ vox:lumen shines brightly, as a moving dance piece, as a technological feat, and as a forerunner in sustainable performance.

It’s biblical, to begin, as vox:lumen does, with light and darkness. The lights go down. In the dark we hear the sound of a one of those crank-up flashlights. Suddenly, a face is illuminated, and another, and another. This oscillation, or dance, between light and darkness surfaces in and out of the entire piece, as the dancers move in and out of light in a series of vignettes that follow a loose, though clearly arced structure. Choreographer William Yong has choreographed light itself as much as any other dancer. We see this most palpably in the dance that took exposure as a theme. One dancer, naked, is surrounded by the other 4 dancers, who illuminate him with flashlights. He moves toward the light with a gesture of shielding, protecting, and longing. The others flash their lights on and off, as if someone was flicking the lights, and all of a sudden a different flashlight, from the other side of the room, is illuminating the body. His body is exposed and revealed from these different perspectives, and we watch him writhe in his exposure. Every now and then, the theatre lights flash something warm— an almost pink light—standing in contrast with the white, cold light of the flashlights. And so, we watch bodies illuminated, both by light and by their skill. The light gives them direction, and they direct the light—as such, the light moves and is moved by them and we watch, our eyes ever adjusting.

This affecting scene is only one of many. In each, themes of light and dark, of blindness, of ‘seeing’, are taken up. As such, the light is not merely a gimmick, a common pitfall with tech-heavy/centric performance. Rather, light is the medium and the message, the form and content. In one dance, members cover each other’s eyes. In another, the dancer moves blinding along boxes, and the other company members move the boxes so that he never falls. In a very affective moment, one company member jumps as another places a box underneath him. He repeats this three time, ending on a tower of boxes projecting him into the heaven—closer to the light. He is alone, but supported throughout. As such, there is a deep sense of care across each piece. The care of the blind leading the blind.

And it is a deep sense of care that resonates in the political power of this play as well. Care for the environment. Vox:lumen, as described in the press release, is “the biggest experiment in staging stability in Canadian dance and theatre history.” The entire show—from the audio to the lights—is powered off the grid by four batteries. These in turn are powered by the company and the audience. In an “energy fair” before the show, audience members are invited to contribute to the shows energy needs by helping power the batteries. In this evocative way, vox:lumen demonstrates what space technology an performance can create: the place where technology and the body meet. It’s the separation of the two that account for our current environmental crisis. In bringing the body back to technology (and technology back to the body), vox:lumen reminds us that the two have always been tied together. A sustainable power grid means a sustainable life. In helping our environment through sustainable technologies, we help ourselves. When we begin to measure the CO2 in the atmosphere, a world that is post-light, begins to sounds less like an imagined dystopian nightmare, and more like a future possibility. As such, just like Artistic Director Tina Rasmussen suggested in her opening night afterword, we must also think about the sustainability of the artist. The work done here, this move towards sustainable theatre, is not only beautiful to watch, it’s politically important. Helping the environment helps you, helping artists helps you. These things are all connected: by the light we see, by the air we breathe, by the things we watch, the way we move, and those that move us.