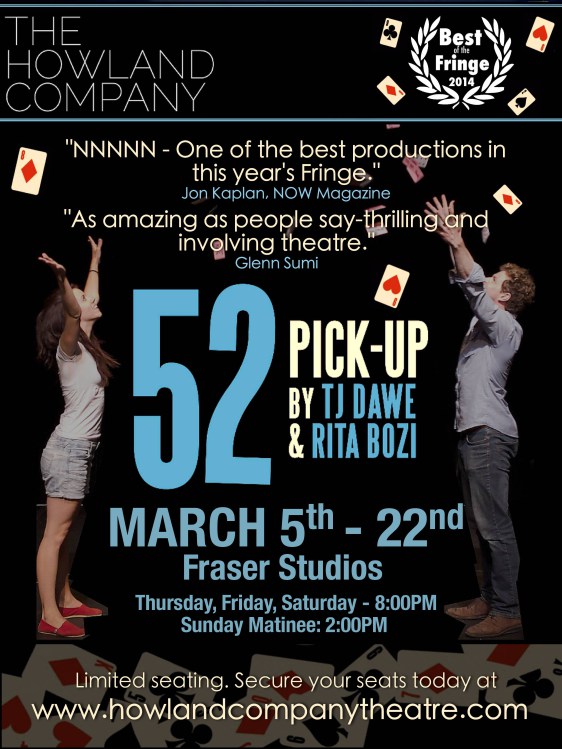 Fringe hit 52 Pick-Up is back, this time at Fraser Studios with more chances to catch any and all of the 4 rotating casts made up of mostly Howland Company founding members. Originally part of the cast, directors Courtney Ch’ng Lancaster & Paolo Santalucia have subbed out, so none of the performances will be quite like the fantastic one I caught in July (when I saw Lancaster with Kristen Zaza) but that’s sort of the point of 52 Pick Up– you can see it over and over and it will never be the same.

This time around I caught Santalucia’s former co-star James Graham, now paired with current My Theatre Award nominee Alexander Plouffe. TJ Dawe & Rita Bozi’s script falls back on some pretty tired gender tropes and I was pleased to find that effect softened seeing the female-female cast in July, so I took a shot that the male-male cast would similarly elevate the text. Here the “M” character (written as male) is played by Graham, who softens some of his edges and embraces the higher tone of his voice for the role but otherwise seems as refreshingly uninterested in the concept of “playing gay” as Plouffe is in playing “the girl part”. One of only two cast members new to the project, Plouffe’s easy charm and strong stage presence beautifully redefine “W” and those pesky stereotypes that riddle the text (she wants to change him, etc) start to feel less invasive.

Unfortunately, with the exception of their best scene (the natural and sweet “First Time”*), the chemistry never really takes off for these two. The first kiss and “I love you” scenes are rushed and the blocking around all their sexual encounters is strangely aggressive. With lots of roughhousing built into the relationship throughout, it feels almost like there are more fight scenes in this 52-card deck than there were for Lancaster and Zaza’s gentler pair. Even when the happy pieces do come up, they’re rarely savoured. Graham, in particular, never seems quite as comfortable in the moment as he does in monologues where he remembers love in the past tense. The two scenes in question- one a reflection on what it’s like to be in love as though asked by a therapist, and one a memory about making his lover laugh- he delivers with breathtaking quiet sentiment and authenticity, but they are notably performed without his scene partner.

Watching Lancaster and Zaza, I found myself rooting for them to work it out. The effect of watching Graham and Plouffe was altogether different. Individually strong but lacking magic as a pair, their story seems like one of misguided romance, as though they are two interesting and attractive people who mistake their both being “catches” for their being right for each other. That’s no less truthful, it happens all the time, it’s just a very different kind of love story (if you want a happier love story, I’d bet on real couple Cam Laurie and Hallie Seline’s version). But that’s sort of the point of 52 Pick Up– you can see it over and over and it will never be the same.

52 Pick-Up plays until March 22. Get your tickets HERE.

*Tip: because “First Time” is the best scene, I don’t want you to miss it. That means that you need to sit near the front or the aisle because the sightlines are pretty bad just in that one part (during which both actors sit on the floor the whole time).