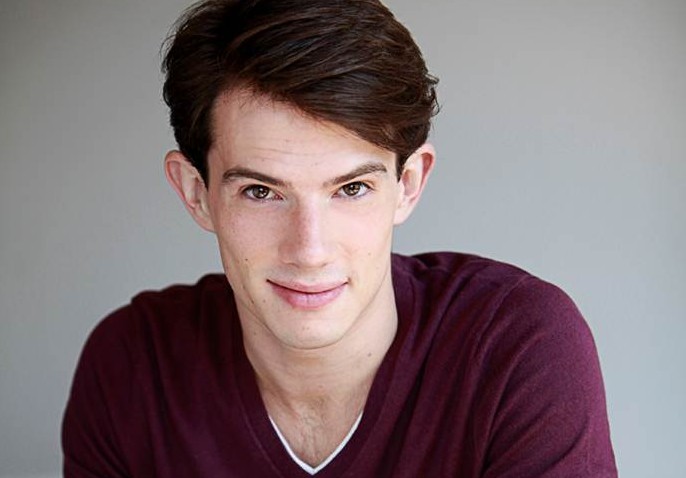 Though we lament that he may have ruined bananas for us forever, Alexander Plouffe’s indelible and intimate performance in Brandon Crone’s gorgeous one-act portrait of modern marriage Maypole Rose (as part of Circle Jerk) was one of the best things about our entire year at the theatre. Bold, intense, funny and honest, the only flaw in Alexander’s performance alongside the great G. Kyle Shields was how criminally short it was.

Can you remember your first experience with theatre?
Summer camp, 8 years old, playing Merlin the wizard. Highly impressive, I’m sure, my costume looked like what Dumbledore might wear if he was a flasher slinging coke at Studio 54 in the 80’s.

When did you know you wanted to be an actor?
The first time I watched Peter Pan. I became obsessed with it, sitting a foot away from the screen, clutching the box, entirely enthralled. I told my Mom I wanted to fly with Peter Pan for a living, which she entertained until I started jumping off things in attempts to take flight. I very clearly remember her explaining that it was a movie, and what that meant, and that they were actors, so I said “Cool, next best thing, lets do this.”

What’s your favourite role you’ve ever performed?
I think I would honestly have to say it is Torrance in Maypole Rose. It’s a relationship and story like nothing I’d ever seen on stage and to be able to live that journey night to night was both exhilarating and challenging in a way that just ignited and inspired me every show to push myself because I felt so passionately that that story and those characters deserved everything I had. Deer #2 in Titus Andronicus is a close second.

Do you have a dream role you’d still like to play one day?
Oh, many. Katurian in The Pillowman, Auto in Whale Riding Weather, Edmund in King Lear, Blanche duBois, Coalhouse Walker Jr., husband, father, arsonist.

How did you get involved with Maypole Rose?
Very reluctantly. No, I saw an audition posting for it and was eager to work with Brandon so I submitted, auditioned and the rest is banana cream history.

What’s Brandon Crone like as a director? How does working directly with the playwright affect the rehearsal process?
Brandon Crone is Haute Mess Couture. He’s got this incredible eye for detail and specificity amidst rampant chaos which I think grounds the piece in real truth while giving it the freedom to bend its reality. I don’t think anyone could have done what Brandon did for that piece, he gave us tons of room to play within the script, to keep it alive and true to the relationship we had built, and then would really anchor us to specific moments when it was called for. He’s got a great sense of balance as a director and, in my opinion, excellent taste.

What would you say is the most important conversation you had with Brandon in developing your interpretation of the character?
We had many conversations surrounding sexual politics and how they existed in this particular relationship, because they were very potent and present in the piece. Torrance and Ryland had a fascinating sexual dynamic that was manipulative, adventurous, steeped in guilt, and without a doubt one that only existed because of their deep love for one another, which was a challenge and uncomfortable at times to unpack. However, once tapped into, unlocked many clues into the character and behavioural patterns.

Tell us about working with G. Kyle Shields who played your husband. Did you know each other beforehand? How did you go about developing such an intimate, comfortable relationship to play a married couple?
Kyle Shields and I shared a fleeting ‘meet cute’ of sorts while separately working on The Playwright Project in 2013 but didn’t cross paths again until the first rehearsal of Maypole. We knew right away it would behoove us and the show to build a personal relationship and thankfully we got on very well, we became fast friends which made being able to build and shape these men at this particularly intimate and vulnerable point in their marriage much easier. There was a mutual respect and trust that came very quickly between us, he is a beautifully generous and honest performer and that show would not be half of what it was with anyone but G. Kyle.

Of the many memorable moments in the short play, Maypole Rose is probably best remembered for your creative (? let’s go with creative) use of a banana. Walk us through the development of that scene. Were you squeamish or nervous at all?
I was ecstatic. I wish I had recorded myself when I first read the script, it was a raucous affair. I just thought it was an ingenious device with the potential for huge pay-off and was SO excited to be the one to do it. The key to the scene really lay in just committing to it so fully it really wasn’t a banana anymore. And then, all of a sudden, with a jerk of the wrist, it wasn’t, and those reactions were priceless.

Was the dance number improvised or choreographed? Is lip-synching in your underwear something you can relate to in your everyday life?
It was largely improvised, there were certain elements I’d find that I’d like and come back to some shows. But it changed night to night depending on how I was feeling and the way the show was going, if it was a bit sexier, more silly, how seductive vs salacious was I feeling, how Beyonce I wanted to go, etc. One night I ran along and high-fived the audience, another I just log rolled for a bit. Craziness.

As for lip synching, it’s pretty much a morning routine, after I do my face, before I do my hair. Lately it’s been a lot of Donna Summer and Clarence Carter’s “Strokin.” If anyone reading has not heard “Strokin’” go look it up now. Go.

Did you have a favourite moment in the show?
Very beginning of the show, sauntering across the stage while the band plays a sexy jazz lick, hearing the door open behind me and G. Kyle walk onstage and knowing that the next 40 minutes belong to this world and this story, and with the games about to begin I couldn’t be happier to be there.

You’re replacing director Paolo Santalucia in The Howland Company’s upcoming remount of their Fringe hit 52 Pick-Up. Have you started rehearsals for that yet? How are you feeling about coming in as a fresh cast member on such an unpredictable show?
We are in the throws of rehearsals, opening March 5th and running through to the 22nd at Fraser Studios so it’s fast approaching. I was nervous initially about stepping into Paolo’s shoes, but I’ve worked with both [director] Courtney Ch’ng Lancaster and [co-star] James Graham previously so it was a very welcome room to walk into. It’s a beast like none I’ve encountered before and I feel lucky to be in such a supportive company that continues to challenge and push each other.

Do you have anything you’d like to add?
Thank you for the nomination, and I hope to see you at 52 Pick-Up! [Editor’s Note: We already have our tickets for opening night!]