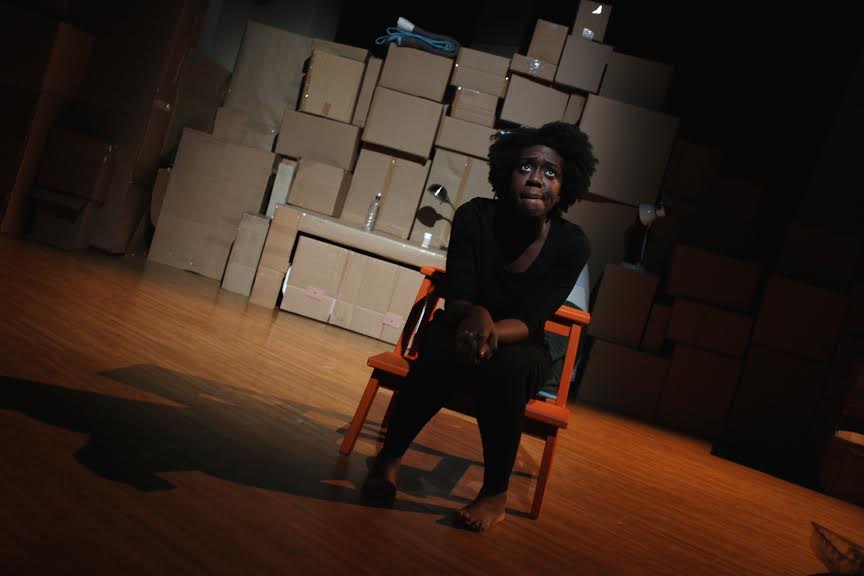 A Satisfying Meal of Fufu and Oreos

I first saw Fufu and Oreos in a staged reading. Obehi Janice performed her one-woman creative memoir at Company One’s 2014 XX PlayLab, only slightly hindered by carrying a binder-script and lacking props. The piece piqued my interest, and I was looking forward to seeing it fully produced. Bridge Repertory Theater has taken it up: directed by Rebecca Bradshaw, Bridge Rep is staging it (in repertory with Sixty Miles to Silver Lake) at the Boston Center for the Arts. I chose Fufu for our February Must-See feature because of Obehi Janice’s creativity, great performance, and the unique opportunity she offers the audience to understand what it’s like to constantly navigate fraught cultural waters.

Obehi guides us through her experience being born in America to Nigerian parents. In nonlinear fashion, we glimpse her upbringing in Lowell, Massachusetts, her various trips to see family in Edo State, Nigeria, and her struggles with depression in adolescence and in college. Though episodic and disjointed, the piece preserves coherence throughout. Obehi’s greatest achievement lies in how she embodies the perspectives and voices of multiple characters: those of her parents, her relatives on both sides of the family, playground playmates, mental health counselors, strangers, even a BBC radio announcer. I don’t just mean that she affects different mannerisms and accents. When we see Obehi’s world through her eyes, we are looking at fully-fleshed-out people, not just cardboard cut-outs of “parents” or “white kids” or “taxi-driving uncles.”

We soon see that seemingly simple questions have no easy answers. Is Obehi Nigerian? Nigerian-American? American? African-American? Black? While her parents speak Yoruba and Esan, Obehi speaks neither; lacking language, is she really from any of those tribes? Scratch that last word: an adolescent Obehi berates a counselor for “writing down” the word “tribe” during their session. She has had enough of people seeing “Africa” through a cultural prism shaped by The Lion King and…well, not much else. She chafes at someone thinking her problems are merely an “ethnic thing.”

One thing I was left wondering about was the playwright’s view on mental health issues and how to address them. Her father is quick to discourage her from telling outsiders the family’s “business.” Obehi pops many pills over the course of show, in clear discomfort of seeking relief through anti-depressant medication. She wishes she could tell her family that clinical depression is not just a white people disease. However, by the show’s end, I’m not entirely sure where she stands on any of these issues. Although she’s always unerringly honest about her fears and expectations, I don’t think she unpacked just what the “loaded promise of Prozac” really is.

What is clear is that much of her sadness stems from subtle turbulence at home, and from a discomfort with her own identity. Obehi observes her parents’ tumultuous relationship and nurses a desire for them to divorce, a desire at odds with cultural and religious expectations and pressures. This desire doesn’t contradict the joy she feels at attending family gatherings with her parents and siblings, “majestic” in their appearance of unity. At such moments, awkward accents and perceived “whiteness” give way to a musical harmony, the delicious feeling of truly belonging.

The feeling is transient, as Obehi and her family duel pernicious stereotypes (“Nothing is more ethnic than Africa!”) while admitting that occasionally they can be self-assigned (e.g. telling her schoolmates she is “an African princess!”). Thankfully, there are a few constants that never fail to ground her: Christian faith in God; a music-and-dance-inspired connection to Nigeria in which verbal “accents” have no place; and, of course, the comfort found in food, in fufu and egusi soup, in the taste of home.

The production was staged with a functional set consisting of a veritable mountain of cardboard boxes (scenic design by Anita Shriver). Out of the boxes Obehi pulls several props (a bird cage, toys, a chair, a broom, a Nigerian gele, etc.). A small bed on wheels pops out of a box several times, and from behind the structure Obehi wheels out a rolling table. The cues were smooth, particularly with regards to sound (design by Andrew Duncan Will). I was intrigued by the decision to edit out some halves of conversations, and to fill in others with recordings (changes I perceived based on the previous version of the play I had seen). Marc J. Franklin’s stage management was key to keeping the consistent pace during this constantly-shifting show.

In Fufu and Oreos, Obehi Janice harnesses the power of voice, of repetition, of cultural fluidity and the strain and joy it can bring in equal measure. She manages to entertain us with her life story while also forcing us to grapple with the implications of being both outside and in. I’d advise you to go see this show because Obehi Janice is a marvel to behold, her story is creatively, passionately, and honestly explored, and her work fills so many gaps. Come see and share with this female playwright, this woman of color, this Nigerian who refuses to be squished into a neat, tidy box of “African-ness.”

Bridge Repertory Theater’s production of Fufu and Oreos is playing now through February 27, 2015, at the Calderwood Pavilion at the BCA.