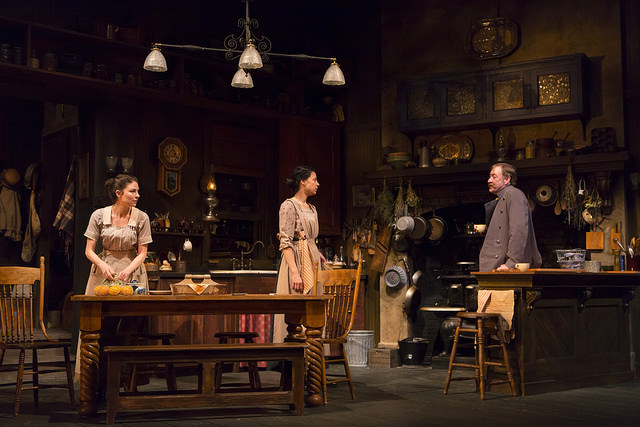 Here are four productions going up this month that particularly caught my attention. Three of the four are period pieces (two take place in 1912), and all of them, in their diverse ways, deal with the most basic of human drives: the desire to achieve fulfilment and find happiness in the face of intense environmental pressures and the lurking demon of self-doubt.

THE SECOND GIRL
Written by Ronan Noone
Directed by Campbell Scott
Huntington Theatre Company
January 16 – February 21, 2015
South End / Calderwood Pavilion at the BCA
527 Tremont Street, Boston
About the Production
The hit TV show Downton Abbey is just the latest expression of the keen desire to know what happens behind-the-scenes of a respectable home, or in this case, below-the-floorboards. Eugene O’Neill’s classic play Long Day’s Journey into Night provides the foundation upon which Noone’s play is set. In the downstairs world of the Tyrone household, we witness the entangled lives of two Irish immigrant servant girls and the chauffeur against the backdrop of Connecticut in the summer of 1912. In Noone’s words: “The Second Girl is the reason I began writing plays. It tells an immigrant American story about what it means to come to America and what American means to so many.”

THE KING OF SECOND AVENUE
Based on “THE KING OF SCHNORRERS” by Israel Zangwill
Book & lyrics by Robert Brustein
Music by Hankus Netsky
Directed by Matthew ‘Motl’ Didner
Choreographed by Merete Muenter
New Repertory Theatre
February 7 – March 1, 2015
Charles Mosesian Theater
Arsenal Center for the Arts
321 Arsenal Street, Watertown
About the Production
The 1979 Broadway musical The King of Schnorrers (based on an 1894 picaresque novel of the same name) is getting a makeover at New Rep. Refreshed to take place in 1960s Manhattan, it promises to be an evening of comedy, romance, and good-old-fashioned con-games. I’m especially interested since the cast boasts the talents of Remo Airaldi, Alex Pollock, and Will Lebow.

FUFU AND OREOS
Created and performed by Obehi Janice
Directed by Rebecca Bradshaw
Bridge Repertory Theater
February 6 – February 27, 2015
Calderwood Pavilion at the BCA
527 Tremont Street, Boston
About the Production
I immensely enjoyed Janice’s performance of Fufu and Oreos during Company One’s 2014 XX PlayLab. Here’s the one sentence summary from that C1 festival: “A multiculti 20-something navigates the collisions between her Nigerian heritage, her American lifestyle, and the loaded promise of Prozac.”

If you are skeptical about watching an autobiographical one-woman show, relax: Janice offers a work and performance that is hilarious and affecting in equal measure. Since the production was being workshopped over the summer, I’m curious to see what changes have been made since.

TERRA NOVA
Written by Ted Tally
Directed by Jake Scaltreto
Flat Earth Theatre
February 20 – February 28, 2015
Arsenal Center for the Arts
321 Arsenal Street, Watertown
About the Production
Having been snowed-in during the blizzard conditions of Winter Storm Juno this week, I’m all set to imagine the weather conditions endured by Captain Robert Falcon Scott and his team as they pressed forward in their quest to be the first to step foot on the South Pole in 1912. Tally’s play Terra Nova recounts the tragedy that ensues as Man tries and fails to take on Nature herself.