Company One and the Boston Center for the Arts served up a full 24 hours of theater with their XX PlayLab, a free theater festival geared towards “propelling women playwrights.” Four plays and two panel discussions fostered fantastic dialogue between artists and audience, leading to exciting developments in existing dramatic works and uniting the Boston theater scene in a uniquely stimulating way.

The main MC of the festival was Ilana Brownstein, Company One’s Director of New Work and a prominent dramaturg in the Boston area. She and other C1 dramaturgs gathered questions from the audience after each play reading and panel discussion. Attending five of six PlayLab events, I was able to observe how an event like this can have a cultural impact in the community, what a free, participative, organized theater festival reflects of the companies that promote and hold them, and what the implications are for the Boston theater-goer.

The first performance of the evening was a staged reading titled Splendor Variations, a new work based off of Kirsten Greenidge’s play Splendor, staged by Company One last season. From what I observed (having not seen the play) Splendor weaved together a collection of community perspectives as various Bellington locals prepare for their Thanksgiving dinners. This new performance consisted of four scenes from Splendor, along with a new one-act play. The first evening of the festival was wrapped up with a research-conducting talk back, one of many I would witness over the next 24 hours. Brownstein emphasized to the audience just how rare it was “for a playwright to be supported to return to a premiered play,” and how fruitful it can be for the playwright to explore different iterations of their work, with the same cast.

In the talk-back, I asked Greenidge what were certain audience reactions she paid attention to when witnessing a reading of her work. Her reply was manifold: as a playwright, she listens for the first laugh, for sighs, coughs, and physical shifting in the seats (which often indicates repeating material in the text, recognized by the viewer). For an artist, there are definite advantages to sitting where you won’t be seen, where you can have a script and a red pen out, ready to record what you need to know to make desirable edits.

The second event of the festival was Miranda Craigwell’s Shelter of Last Resort (also a work in continual creative flux). Craigwell, whom I had seen only days before onstage in the fantastic production of Smart People at the Calderwood Pavilion next door (https://www.myentertainmentworld.ca/2014/06/funny-moving-smart-people-at-the-huntington/), described the genesis of this play as taking place in a hotel room in Chicago. Watching the aftermath of Hurricane Katrina and the situation unfolding in the New Orleans Superdome, Craigwell was struck by the stark fact that no one in this disaster could “buy or fame their way out.” Her play knits two narratives together: one takes place during those fateful days of 2005, the other in 1815 on a southern plantation. In both times, the victims of racism and American socioeconomic conditions are equally visible and invisible to their oppressors.

Feelings of ambiguity and remaining questions seemed to be a positive aspect of the experience for most of the audience, although Craigwell was well aware of the risk of ending up with a “confused audience.” I was reminded during this morning performance of the usefulness of allowing the playwrights an opportunity to ask questions of the audience during the talk-back. A few people asked musical director Geannetta Bennett about the incorporation of long meter, a Southern musical tradition, in this iteration of the text. Bennett and Craigwell both agreed that the sound served in “deepening the meaning of the text” in certain scenes. Someone else inquired about how effect-heavy the show would have to be, considering the importance of water in the stage directions. Craigwell responded that she always envisioned the piece as “Nine souls in a space…water flooding the stage.”

But the observation that most intrigued me in the talk-back was when Craigwell pointed out that “you can talk about anything in the theatre…except faith.” The importance of religious faith for the characters and for determining what ultimately happens to them is paramount, and it contributed to the sense of ambiguity that kept the piece elusive in an interesting way.

Third up in the festival line-up was a sneak peek of the upcoming play Astro Boy and the God of Comics, conceived and directed by Natsu Onoda Power. Suffice it to say that frenzied actors wielding markers on a large white sheet of paper led to…KER-SMASH! A vehicular accident. (Note: no actors were harmed in the making of this sneak-peek. They were just drowned in red glitter).

Swiftly following the brief demonstration was a panel discussion with Power, assistant director Jamie Gahlon, and dramaturg Ramona Ostrowski on the conception of Astro Boy. The panel discussed “live cartooning” and the process of “incorporating the language of comics into theatre.” While the nature of the interactive projections to be used in the premier of Astro Boy remained cryptic in this discussion (I will be seeing it when it comes out on July 18), I was intrigued by the importance the panel placed on theater companies being in conversation with local artists and bringing in out-of-town artists to work on experimental pieces such as these.

Fourth, we had a panel on Geek Theatre. On it were Power and Ostrowski, joined by Crystal Paul (the writer/editor of GeekOutsider.com), and Crystal Skillman (playwright and affiliated artist of Vampire Cowboys theatre), and moderated by the omnipresent Ilana Brownstein. Brownstein and Ostrowski discussed how geek theatre was on the rise; the theatre must be timely, and geeks seem poised to “inherit the Earth.” The dramaturgs sought the perspectives of their geek panelists. One of the immediate challenges of this discussion was keeping the level of jargon to a minimum, or at the very least keeping quick definitions handy. Brownstein, no stranger to geek culture, had her hands full with this task, (“And…who is Stan Lee? What is Con? What is anime?”), a smart move considering the diversity in age and, presumably, geekdom and cultural consumption among audience members at the PlayLab.

The panelists explored the different realms of Geek theatre (e.g. as whimsical or story-grounded), the vulnerability of those who immerse themselves in the culture, and how geek theatre faces similar competition with TV as non-geek theatre does (Skillman: “I could be watching Silicon Valley right now!”).

Knowledge of terminology was key in the discussion. Power, who wrote a book about Japanese cartooning, was asked to define “manga.” She smartly pointed out that “manga” means “comics” in the same limited way that “salsa” means “sauce”: style and genre considerations can be lost with overly literal definitions.

The most fascinating talking points revolved around how geek culture brings people from diverse backgrounds together, but not always in unproblematic ways. Is it right that some people find it easier to “relate to dragons rather than gay people”? Who has the right to tell what story? Power, discussing a past experience directing David Henry Hwang’s play Yellow Face, wryly pointed out that “only in the theatre do you see a bunch of white people on stage,” the primary actors. Brownstein added that the greatest diversity she ever witnessed in Boston was in the anime convention.

The panel was a bit of an absorbing wall of geekdom rather than a broad discussion, but then, as Paul noted, “Intense obsession with one thing is the essence of geekness.” The talk did open up at certain moments. It took a well-timed question from dramaturg Jessie Baxter, sitting in the audience, for the panelists to address the pretty glaring question of women in geek culture. Baxter inquired about whether for women, perpetually oppressed by men in almost all geek circles, escaping to the theatre proved a better/worse/different prospect than remaining in other forms of media. While I didn’t hear any satisfying answer to that particular question, it was clear that the jury was still out on the biggest question of all: what will geek culture, specifically geek theatre, evolve into when the barriers separating outsiders from insiders finishes crumbling?

The fifth event of the festival, the last I attended, was arguably the most delectable. Fufu and Oreos is a one-woman-show written and performed by Obehi Janice. I dropped any reservations I may have had about witnessing a solo-performed, autobiographical show when Janice began the first of many vignettes into her complex life. C1 show summary: “A multiculti 20-something navigates the collisions between her Nigerian heritage, her American lifestyle, and loaded promise of Prozac.” Janice’s performance reminded me strongly of Anna Deavere Smith in Fires in the Mirror. Janice didn’t just imitate her mother, father, aunts and uncles, white Mass-hole playground friends, her well-meaning therapists and the many less-than-well-meaning strangers she has met; she embodied them fully in gesture, physicality, accent, and posturing. With plenty of zippy one-liners (“There is nothing more ethnic than Africa!”), and moments of sobriety mixed in with humor, Fufu and Oreos was my favorite piece in the festival, and not just because each audience member got a free Oreo.

The play’s creative evolution sounded pretty dramatic; Janice confessed in the discussion that she originally thought that “the worst thing I could write…[was] a play about myself.” From a mostly stand-up performance covering daring subject-matter (“Hey; I’m depressed!…What’s up with that?”), revisions poured in, as Janice self-produced the work, collaborating on the text with C1 director Steven Bogart and dramaturgs Ilana Brownstein and Ciera Sadé Wade. Brownstein asked Janice about the difficulty of writing material to be performed by oneself. Janice seemed to enjoy the chellenging task of separating actor and writer, and found it more helpful to consider the work a creative memoir, where liberties could be taken with real-life events. “When you are a solo performer, the audience is the second character,” Janice said. The playwright stated that her ultimate goal was to make it possible for this piece to be performed by someone else. Fufu and Oreos created a performative and poetic space richly filled by Janice’s talent.

I wasn’t able to stick around to hear the panel on future projects currently on Company One’s radar. But after attending this weekend festival, I obviously did not need much more motivation to keep an eye on this exhilarating company. I was impressed by the level of professionalism and friendliness doled out in equal measure by the C1 staff, performers, and artists throughout the festival. I’m thrilled that Boston female playwrights have such an outlet to get artistic and financial support to continue working on their projects. But I also respect any company that stresses the importance of audience feedback as well as audience interest and support for local theatre. 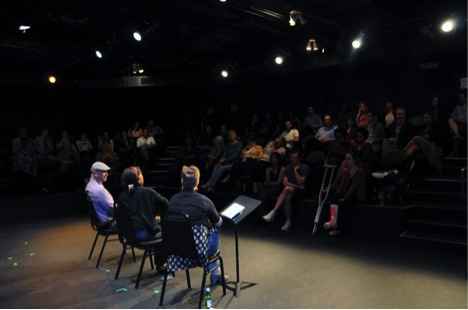