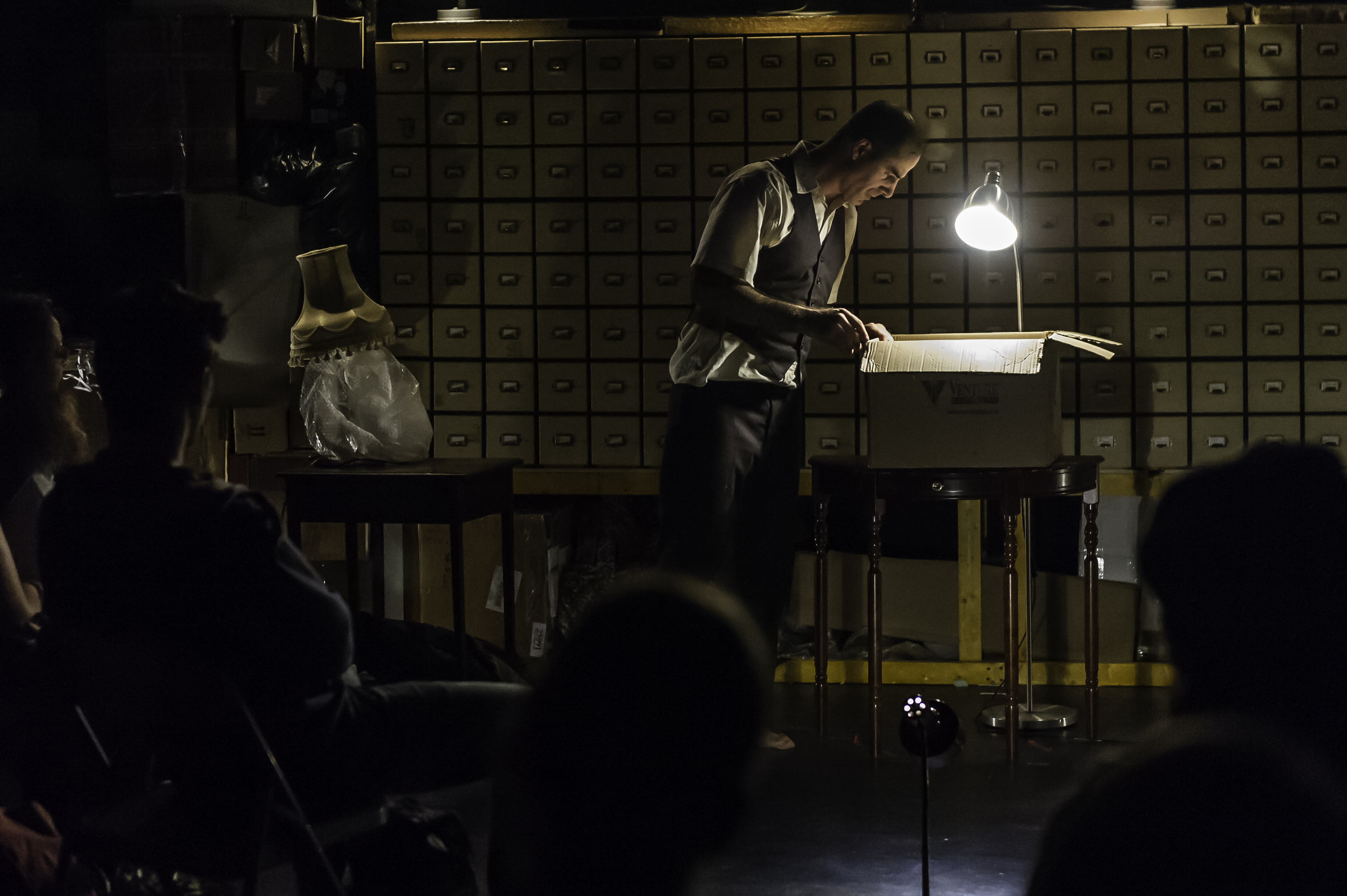 More than One Lesson to Learn in The Object Lesson

There really are not enough wonderful things to say about The Object Lesson, part of the World Stage series at Harbourfront Centre. I have not seen such an enchanting piece of theatre in a long time. It’s truly a shame that its run is so short as it would offer many, I feel, the chance to get caught up to the 21st century of what theatre can offer us. As a “show” I learnt so much about what is possible “on stage” today. Thematically, I found myself questioning my relationship to the miscellaneous things I keep in drawers or sprawled atop tables.

The space is covered from floor to ceiling in boxes. We are encouraged to explore. Adults seem to lose all inhibition, like children in a candy-shop. I find myself ravaging through cassettes, enthralled at the Indian celebrities and jazz artists I know nothing about. My guest discovers voices coming from the various telephone receivers in an opened carton. Later we notice that a turned over box on the opposite end of the room contains a diorama: a Victorian living room of sorts. And another, that of a rail-crossing, complete with sound and lights. I have no idea how significant these mini installations will become within the bigger installation, until later on in the evening.

Solo performer Geoff Sobelle brilliantly crafts his set for the first scene, from the rubble, gracefully unraveling boxes that seem to melt away as set pieces effortlessly emerge, including a barrage of lamps. It so happens that my guest and I have positioned ourselves unknowingly on a (boxed up) speaker at the centre of the room, to be used for much of the show. We are eloquently asked to make room for what will become the mise-en-scène, causing us to be split up. My coat ends up swept away to a large table somewhere at the back. I don’t care because I am having too much fun by this point. If someone decides it’s a prop, let them!

At one point, as Sobelle relays a story about travelling in France, wine and cheese and a baguette are pulled out of a box up high and cycled around the room. (Yes, I must mention I may have drank wine from a bottle, I’m not sure how many others had). The cohorts of my spectator flock break bread together!

Sobelle charms us with his heartfelt tape-recorder confessions speaking of relationships among other life moments of importance. In congruent vignettes, he converses with someone on the telephone and the responses on the other end are extracted from the same dialogue previously recorded live. I begin to wonder if all these items that surround us, along with those weaved into the narrative, are representative of the search each of us have for self, trying to make sense of who we are amidst a sometimes convoluted reality.

I certainly have a few moments where I wonder where all these beautiful and hilarious vignettes, including a salad made entirely by way of the blades of a dancing ice-skater (I swear I didn’t make that up), are leading too. However, I find myself thinking deeply about all the things I have and how clustery a lot of them are. I am not sure, however, if I am more motivated to finally live as a minimalist or if I am now inspired to use all the things I have in a more beautiful way. Perhaps, I have not learnt my object lesson.