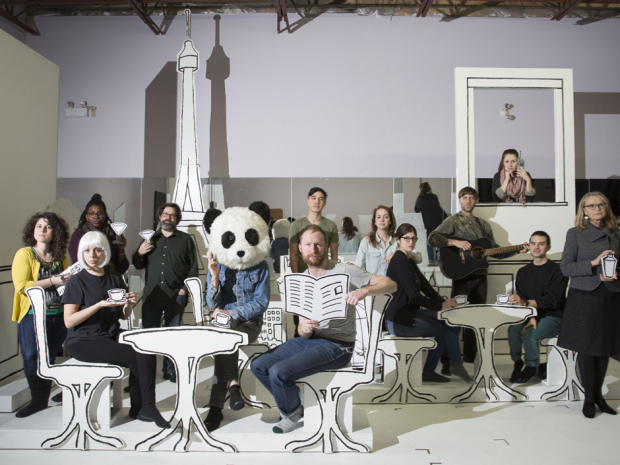 Margaux: Were they always meeting in Paris?

Sheila: By accident. It’s an accident.

This epigraph is dialogue from a conversation between Sheila Heti and artist Margaux Williams talking about Sheila’s difficulty writing the play, All Our Happy Days Are Stupid. This is also the backdrop for Heti’s novel How Should a Person Be? where Sheila struggles to finish that same play. While the play did end up being finished, it has remained unproduced. Until now. Coming from Kensington’s VideoFag, All Our Happy Days Are Stupid opened at Harbourfront’s Worldstage Wednesday night, under the direction of Jordan Tannahill. There’s been quite the buzz around this show—from the few who witnessed it in the intimate space of VideoFag, to the many fans of the talented ensemble that make up this show— and the CBC interviews, added late-night show, and general talk has left it much anticipated. All Our Happy Days did not disappoint—offering an absurd portrait of people trying, with their flaws and their striking, humourous, and painful humanity, to be happy. Though, much like the characters themselves, the play was far from perfect. All Our Happy Days Are Stupid shines in moments, lags in others, but is overall, a unique, beautifully executed, tragi-comedy.

As the epigraphs states, two families meet in Paris, while they watch a parade. The majority of lines in this opening scene, and indeed the rest of the play, are delivered out to the audience, to the fourth wall. This device is accompanied by incredibly stylized acting choices. Syncopated cadence and rigid gestures, accompany the actors shouting lines that should be spoken, laughing lines that should be shouted, or throwing in long pauses half way through sentences. All of this gives the play an air of the absurd. Similarily, the entire set is two dimensional—white cardboard cutout, with black contours. And so, then entire stage looks a little like a drawing. Characters too are all dressed in black and white, making the stage picture one of striking simplicity and beauty. Characters hold two dimensional tea cups that that stick back to their two dimensional table as if by magic (though someone later told me it’s magnets). The whole this is reminiscent of Lars Von Trier’s Dogville with it’s evocative simplicity.

Yet the play was not without its flaws. The script itself, though much enhanced by the direction, is a strange one. Played straight, it amounts to a not-so-interesting family drama. But just when you start to assume that, a strange aside, or a flute gets pulled from a suitcase, and the whole things becomes too weird; so weird, that it’s almost like real life, really. We think we live in a world of black and white—and we do, looking at our costumes, and our surrounding—but of course, we don’t. Playing with this paradox, the show is hard to describe: moments of the play were absurdly funny while other moments dragged and fell flat. Sometimes it worked, and sometimes it didn’t, and whether it was the script, acting, or the audience, I’m not quite sure. What I am sure about, is that here we have an extremely talented group of people throwing things together on stage with great gusto. None of that was lost on the audience. However, I think something was lost in the move from VideoFag to Habourfront Centre Theatre: intimacy. It sometimes was boring. Sometimes too quiet. Sometimes too long. Something I wanted to be closer, see more. Because they were certainly doing more than I could see it in back—is that why people were laughing? Could they see something I couldn’t? It is clear the work that went into adapting the show for the larger space, but a little more was needed to make it a success.

However, the success was there. We all saw it in the show-stopping/stealing performance of Kayla Lorette as the hobbled old man. The weird story of his life, with Lorette’s delivery, pacing, and physicality had us in stitched in moments. Lorette, along with Becky Johnson as Mrs. Sing, demonstrated the potential in every line of dialogue—no one hit it quite like they did.

All Our Happy Days are Stupid is one to see. It’s one that stays with you—as you struggle to describe it, define it, pin it down. Because it defies description. It won’t be pinned down. It’s an accident, in many ways, the whole thing. One that explores the happiness of our stupidity and the stupidity of our happiness. It takes a look at the carnivalesque, goofy, painful, Wes-Anderson-esq, performative absurdity of just living. Because, when the actors look out to the audience at the parade, we become the parade. And weren’t we always the parade, after all? With weird, funny, earnest tunes; with strange, all-too-human, quirky characters; with sweet, hilarious, intimate direction; All Our Happy Days Are Stupid is that moment just as you wake up, when the dream still lingers, and reality and fantasy are thrown together in a cocktail of your problems and your hopes, and everything is black and white, two dimensional, and just for that moment the possibilities are endless. You can fuck a panda bear, and fall in love, and play the opening riff of Kiss From a Rose on the flute for the prince of all seasons, and become a troubadour, and get lost and come back again. It’s that moment right before the day sets in, and says no.