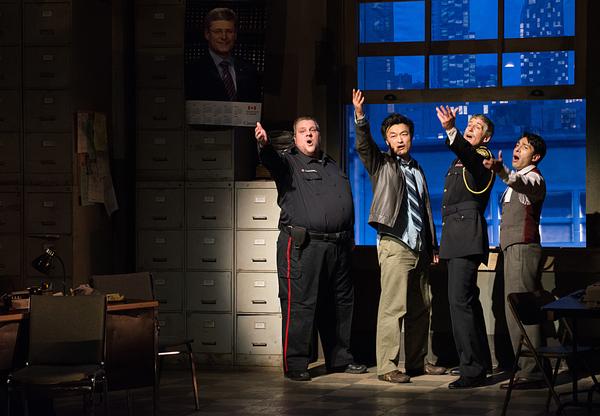 The new Soulpepper season opened last week with Dario Fo’s Accidental Death of an Anarchist, directed by Ravi Jain, translated by Jon Laskin and Michael Aquilante, intensely modernized and adapted and localized by Jain and Paula Wing. The production stars Kawa Ada, a rapturously engaging and versatile performer born in Afghanistan and appearing on the Soulpepper stage for the first time. Jain is making his Soulpepper directing debut. The resulting piece- about a madman who infiltrates an internal investigation at the Toronto Police Department by impersonating first a judge then a forensics expert- is as insane as its leading character. It’s outlandish, tonally erratic, abrasive, silly and self-righteous. There’s a long Three Stooges-esque sequence in act two that’s as dull as rocks (the tricks are far too slow and cautious) and the localization quickly begins to feel like a campus skit with easy laughs earned in the “haha, it’s so true!” tradition. There were moments I loved (the end of act one is particularly glorious and I had great unintentionally elicited fun watching Paul Sun-Hyung Lee and Daniel Williston corpsing in the background of the Stooges scene) within large swaths when I was bored or even annoyed but, leaving the Young Centre last week, all I could think was “hells yes, Soulpepper!”.

The best part of the production is a moment in act two, after a breathtaking tangent from newcomer Ada, when Oliver Dennis (a man second only to Albert Schultz in representing the face of classic Soulpepper) not-so-gently reminds Ada of the rules of theatrical convention. It’s uproarious, unexpected and pointed far beyond its surface value as a meta-theatrical one-liner. Soulpepper is really really good at Death of a Salesman (solid, challenging but non-threatening modern drama that very much obeys theatrical convention) and they know that a few metaphorical Salesmans a year keep their ageing subscribers and private donors happy, thus keeping the company alive. But there’s more to the word “alive” than keeping the lights on and it’s boldly interpreted, shake-the audience shows like Accidental Death of an Anarchist (which carries a very indie-theatre sensibility despite its definitely-not-indie host) that really keep Soulpepper alive.

This is fearless programming, the sort of piece that reminds you that, just because a company has money and smartly pursues more, doesn’t mean they’ve lost their artistic purpose. Soulpepper’s edgiest programming is still accessible, entertaining and, obviously, well-funded but to let those qualities overshadow a piece’s provocative power is snootily simplistic. With so many big companies letting donor recommendations and demo research guide their artistic choices, I think it’s time we gave Soulpepper their due credit for serving up great deaths of BOTH Salesmen and Anarchists.