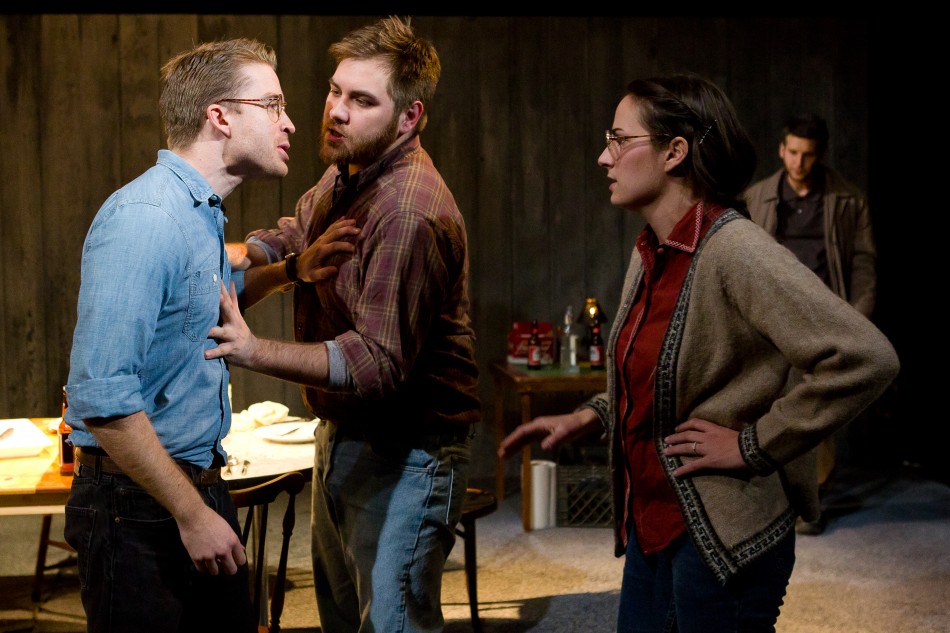 One dysfunctional family. A murder that no one talks about. A small, black box containing the biggest secret of all. Brian Watkins’ new play Wyoming, currently playing at the Theatre for a New City, explores concepts and themes of love and loss that are inherently unremarkable, but that are weaved together beautifully to create a suspenseful, intriguing story (albeit a story with a weak ending).

Wyoming opens with brothers Tom and Grant Tuttle, drinking beer and chewing tobacco while searching through an old family slide show for something that has the brothers on edge – a picture, to be specific. As the scene unfolds, the brothers reveal that the picture in question contains an absent older brother, Adam, who apparently killed their father with a nail gun at the tender age of 14 or 15. The mysterious sibling was then shipped off to the mental hospital, where he silently spent several decades. With a brief interlude showing how Tom and Grant’s parents met, the action turns to April, the oldest Tuttle sibling not residing in a mental ward, who is struggling to raise a precocious child by herself while harboring a secret about the day her father was killed. During a moment of drunken over-sharing, she describes how she saw her dying father get up from the floor and use his last ounce of strength to write down a sequence of numbers on a piece of paper. She then saw her murderous brother use the combination to open a black box that he had retrieved from the basement, which held…. Well, she is not sure. Haunted by the incident, April decides to confront her long-lost sibling and mother to solve the mystery once and for all.

The plot in Wyoming slowly unwinds, with just enough speed to keep audiences intrigued by the puzzle before them – hanging on to every word. At least, for the most part. When the entire Tuttle family finally sits down together for Thanksgiving dinner (including Adam), Grant has the brilliant idea to draw out the family mystery by playing a game in which every player says one word to create a story. This is a clever choice because the game, by its very nature, only permits the revelation of a small amount of information at one time. Unfortunately, it is also a device that threatens to reveal information too slowly. The game continues for a significant amount of time, and, like all parlor games, grows tiresome quickly.

Sadly, the greatest downfall of Wyoming is its finale. Following Adam’s climatic revelation about the day Hank Tuttle died, there is one final scene that feels like a drawn-out “slow fade to black” (referred to by the playwright as an Epilogue). An apparent effort to comment on the passage of time, the sequence is simply confusing as April’s daughter appears to become a teenager – smoking on stage, checking her iPhone, and taking care of the older Tuttle siblings who sit quietly and watch a slide show. Ultimately, it is a head-scratching ending that lasts for far too long. Had the play ended a bit sooner, Watkins would have left patrons with a lingering high from the penultimate scene, rather than disappointed confusion.

The cast of Wyoming comes together nicely as an ensemble, although the artistic decision to have the characters talk over one another throughout the play often results in missed lines and garbled interactions. I appreciate that people are remarkably talented at talking over one another and carrying on side conversations, but art need not always imitate life (especially if the artist’s goal is to have the audience follow the plot).

When not combating each other for attention on stage at the direction of the playwright, several of the actors gave first-rate performances. Sarah Sokolovic is exceptional as the fierce (and likely alcoholic) single-mom April Tuttle – she delivers her lines with remarkable comedic timing and conveys April’s emotional problems through well-crafted mannerisms. Often verbally sparing with Sokolovic’s character, Laura Ramadei transitions beautifully from Maggie, a young bartender falling in love, to Maggie Tuttle, the tough-as-nails and opinionated matron of the Tuttle family. A highlight of Ramadei’s performance is Maggie’s response to her long-lost son showing up for Thanksgiving dinner – her feelings of anger and exasperation are palpable. Speaking of long-lost Adam, Roger Lirtsman gives an incredibly gripping performance for someone who spends the majority of the play with his back to the audience – a faceless and silent figure. When Adam finally makes his presence known on stage, Lirtsman’s performance is transfixing.

Human drama wrapped in a thriller with just a hint of a love story, Wyoming explores the complexities of family dynamics and delivers an engrossing, even suspenseful, mystery worthy of a trip to the East Village. Tickets are available through January 31.