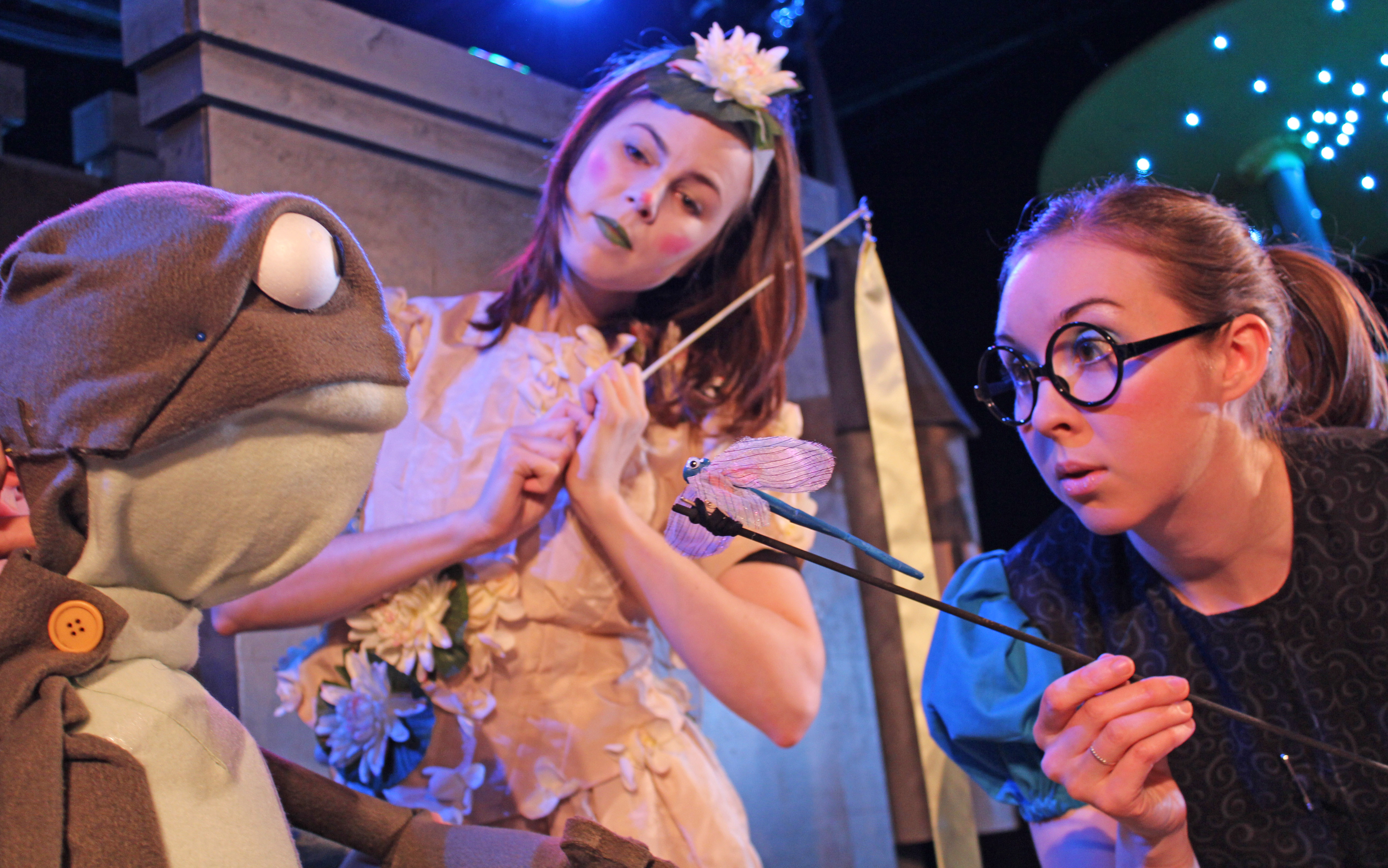 Where do I begin in describing how much fun I had at Kerplop! The Tale of the Frog Prince? I suppose at the beginning, with a description of a traditional panto for those not in the know. A pantomime in this context is a UK theatrical tradition based on staging well-known fairy tales in an improvisatory way, requiring audience participation and a wealth of popular cultural references. imaginary beasts, one of the few local theatre companies to stage a yearly winter panto, is putting on one heck of a show at the BCA Plaza Black Box Theatre. The panto is directed by Matthew Woods, and written by him and the rest of the ensemble. Full of puppetry, pun-ditry, and plenty of pot-shots at the popular and the political, Kerplop! is a terribly fun performance you should not miss.

Our guide for the evening is Old Mother Schnell (a schnail!) (Kiki Samko), who kindly leads us “little mushrooms” through the story: the Book of Oracles (Noah Simes) has foretold that the “wild child” Princess Aurelia (Erin Eva Butcher) must marry before the upcoming total eclipse of the sun, or else the Kingdom of Little Puddle will be doomed. Her mother, the Queen (Joey Pelletier), in a panic, calls for Le Grand Moustache (Cameron Cronin), a frilly fast-talking Frenchman who can give the princess an Anne-Hathaway-circa-2001-style makeover. Moustache charms the royal governesses Prim (Audrey Lynn Sylvia) and Proper (Lizette Morris), and racks up a considerable bill as he works his magic, spiking the blood pressure of the stingy Lord Buttondown (Bob Mussett). Moustache is accompanied to the castle by his friendly skunk pal Coco (Mikey DiLoreto), always ready and eager to help in any way he can.

Meanwhile, unbeknownst to the court, Prince Friedrich (Elizabeth Pearson) and his knight pal Sir Heinrich (Michael Underhill) are on their way to the castle, pining for a quest to break up the monotony of trekking to woo the princess. Be careful what you wish for: the prince becomes the target of the evil water nixie Aquanetta (Matthew Woods), aided by her troll son Wart (William Schuller) and the trodden-underfoot-henchman Leech (Michael Chodos). When Aquanetta turns Freddie into a frog, he finds aid in an unlikely group of friends: the super dependable but occasionally pedantic dragonfly Zip (Amy Meyer), the bullfrog Jeremiah (Simes), and the environmentally-conscious Good Fairy Waterlily (Molly Kimmerling), all of whom encourage Freddie to “frog up” and fight for what is good, right, and true.

Having reviewed Hairy Tales and Knock! The Daniil Kharms Project, many of the ensemble faces were familiar to me. There is so much to enjoy here: Schuller’s psychologically-disturbed portrayal of pathetic Wart, Pelletier’s ingrained royal disdain for us plebeians, Cronin’s transformation from fastidious Frenchman to Peter Griffin (you’ll see what I mean), Meyer’s winning and surprisingly convincing dragonfly puppetry (puppet design and construction by Jill Rogati and Pearson), Pearson’s bashful froggy interactions with Butcher’s hilariously conflicted princess, Underhill’s un-discourageable knight, and Simes’ uplifting Jeremiah, etc. But top marks go to Samko’s Schnell. Whether slowly inching towards us with warm advice and kindly exhortations, or striving to slow down the impatient Sir Heinrich, or telling off Woods for forgetting a given scene (more on the meta performances in a bit), or appearing in new form towards the end (just wait and see!), Samko steals every scene she is in with rich vocal work and the best facial expressions in the whole performance. I can’t gush enough about Old Mother Schnell.

This delightful tale fills the Black Box with color and song. Lighting designer Christopher Bocchiaro envelopes the stage with sumptuous washes of green, orange, purple, and blue, setting off the brightly colored, lily-pad-inspired kingdom (design by Candido Soares and Woods, painting by Andrea VanDenBroeke). Each member of the ensemble is richly costumed by the inimitable Cotton Talbot-Minkin, and one of the actors made a point of offering a shout-out to Talbot-Minkin mid-performance.

There were many such meta-incidences, including a moment where Pelletier argued with stage manager Deirdre Benson about not being allowed to use booze onstage, and another where an audience member encouraged the Good Fairy by shouting “Get ‘em, Molly!” The panto only works if the audience participates, and participate we did, as we cheered the goodies, booed the baddies, and interjected in all manner of ways. Mostly, we reacted to the plethora of references offered up by the performers. Here is a short (!) list of references I caught: weeping at the closing of the local Factory Theatre; Wayne’s World; Renee Zellweger’s plastic surgery; the Boston highway protesters; various allusions to Disney’s Fantasia; Taylor Swift’s annoying hit single “Shake it Off”; Frogger; “Adele Dazeem”; the list goes on and on. There’s no sure way of knowing which references are recurring, and which were unique to the performance I attended; that’s the fun of a panto.

The very best thing about the show is its versatility and the possibilities it opens up for idiosyncrasy: what you end up most enjoying and relishing is whatever comes up in the performance that speaks to you directly. I’ll give you an example. There were many humorous musical numbers that popped up, such as “The Age of Aquarius,” “Smile” (sung quite well by Butcher), “Close to You” (eliciting dreamy supportive arm waves from the audience), etc. But I nearly lost my shit when the ensemble started performing “Cuban Pete,” Jim Carrey’s dance number from the film The Mask. Perhaps this song means nothing to you. But since I have been reducing my father to Ricky Ricardo-esque peals and tears of laughter with my own rendition of the song since I was age four, I was positively tickled to see it performed live, further enhanced by the fact that it has absolutely nothing to do with the traditional story of the frog prince.

I’ll give you another example: I happened to notice that certain cast members of the recent (excellent) SpeakEasy production of Necessary Monsters were sitting in the front row (perhaps in support of Underhill, who also performed in Monsters). When the ensemble urged the audience to sing along to the lyrics of “You Are My Sunshine,” I saw the NM folks exchange amused and slightly alarmed looks. If you saw NM, you of course know that one of the characters in that play (a serial killer) sings the song as he cuts the throats of his various shackled victims. The presence of the song in the panto must have been darkly humorous to these audience members (one of whom was knighted by Her Majesty the Queen early in the show, and called upon a few times to provide small props from a handbag).

Kerplop! is a great antidote to snowed-in Boston’s winter blues. To guarantee a good time, I highly advise shouting early, and shouting often.

imaginary beasts’ production of Winter Panto 2015: Kerplop! The Tale of the Frog Prince is playing now through February 7, 2015, at the BCA Plaza Black Box Theatre.