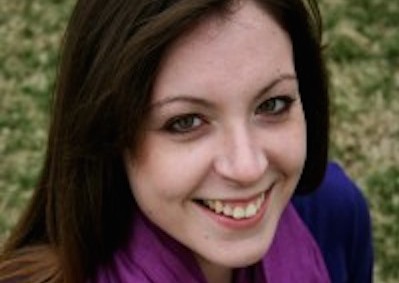 Lizette Morrris is a consistently strong force behind some of Happy Medium Theatre’s best work, a director with sharp visions, brilliant execution, and a strong collaboration with her actors. Her production of Dog Sees God: Confessions of a Teenage Blockhead with Happy Medium Theatre earned her a 2013 Boston My Theatre Award nomination for Best Director of a Play. Lizette talked to us briefly about her history with the company, how she grows and learns as a director , and what makes her smile.

Lizette, thank you so much for talking with us about your work. Tell us a bit about your history as an actress and director. Did you study theatre, acting, or directing in college? How did you become involved in Happy Medium Theatre?
I started working in theatre in high school as a technician and wardrobe; I didn’t try my hand at directing until my senior year when I directed a scene from Christopher Durang’s Beyond Therapy.  Going into college, I spent a lot of time working as a carpenter, electrician, and stage manager, but, again, I didn’t do a lot of directing until later in my tenure there. I performed rarely because, if I’m being really honest, it made me sort of ill and I did nothing but beat myself up about every choice I made. I found that I really like being cast in musicals and musical reviews because the acting was so over the top (at least for the shows that we were producing) that I didn’t have to worry about it so much and I could just have an awesome time singing. Despite all of that, I knew that directing was my passion and I needed to work harder at making more opportunities for myself. I still perform, but it’s more of a way to remind myself of what I’m asking actors to do every time I cast them.

I met most of Happy Medium Theatre  [HMT] while stage managing a show at the Boston Playwrights’ Theatre when I first moved here. It was a job I fell into but ended up changing the course of my artistic life in Boston, and I’m very thankful for that serendipitous meeting.

How did you come to direct Dog Sees God? Why did you choose to direct this show?
DSG was a show that had been on HMT’s radar for quite some time. I cannot quite remember what the decision-making process was in terms of my landing the role as director, but I remember being really excited about it. The script resonated very deeply with me as early as the first read, and I fell deeper and deeper in love with it as we worked.

Other than Dog Sees God, what have been your favourite productions to direct? To act?
To direct: HMT’s Baby with the Bathwater.  These are some of the funniest and most professional people whom I’ve ever had the honor of directing.  Also, I’m super proud of the set design that Deidre Benson and I designed and ultimately built ourselves.

To act: if I can’t count Van’s Sister from DSG, I’m going with Vixen from The Eight: Reindeer Monologues. Essentially, I have a proclivity for sassy, strong, and snarky ladies that openly challenge gender “rules.”

What was it like to direct and act in the show? Did you have any challenges? How do you think doing both might have helped your directing/acting?
Trying to direct and act in the show was a lot more difficult than I anticipated, and I struggled with my performance right up through final dress. The biggest challenge was during tech and dealing with the fact that I’m a total control freak. I’d have to jump up from the house to go backstage and get my head right before walking out to do my scene, and the whole time I was in my own head wondering, “Would it be better if we were on SR instead of SL? Is this lighting look too hot? I feel like I’m not projecting . . . Can he (Mikey DiLoreto) hear me?” I think my biggest take-away was that I should probably only do one or the other in the future because when I try and do both, I turn into the Mayor of Crazytown.

What is your favourite part about directing? About acting? About seeing a production as an audience member?
Directing: Tech Week. I know it sounds crazy, but, for me, that’s when all the magic happens.  When it goes from being words and movement to an immersive experience.

Acting: Getting the opportunity to embody a different person who usually has character traits that I don’t actually possess.

What are some of your favourite plays? What would you like to direct? Act? Related, what do you think makes for good theatre?
This is a huge list so I’m going to really limit myself to plays that fit both criteria: Long Day’s Journey Into Night, Stone Cold Dead Serious, and Twelfth Night.

Good theatre is engaging, dangerous, thought-provoking, challenging, elegant, musical (both in the literal and non-literal sense), and arousing.  It asks big questions and usually polarizes audiences.

What makes you smile?
A really good cup of coffee in morning, a favorite song coming on the radio, some variety of whiskey or bourbon (neat) at the end of a long day, the sight and/or sound of a loved one, pithy British banter, puppies (usual of the English Terrier, pug, or pit bull variety), little kids being awesome, high quality street art/performance.

To where would you travel? What would you do?
EVERYWHERE. If I was independently wealthy or came in to a bunch of money, I’d totally fall off the grid and roam around the globe for a few years.  Experiences would probably be centered around the arts and food, but there’s a lot to be said for the journeying itself. Bali is currently at the top of my “Places to Travel” list.

What is the scariest thing you’ve ever done on-stage? In real life?
On-stage: This is not so much the scariest thing that I’ve done, but rather, the scariest thing that’s happened. During HMT’s The Revenants, my harness broke at the end of a scene so, during the transition, I had to figure out how to fix it before the lights came back up. Luckily, our eagle-eye SM, Deirdre Benson, saw it and gave me the time that I needed to remember how to tie a knot. It’s amazing how quickly your brain forgets to do the simplest things when the pressure is on.

In real life: I’m kind of a bonehead and I have a propensity for making “strong but wrong” choices. However, I think the scariest (and least embarrassing) thing to date, has been signing up for the Tough Mudder this June.

How do you grow and learn as a director? Who or what inspires you as a director?
Growing and Learning: See live performance (theater, music, and performance art) as much as possible, read anything and everything that interests me, go to museums and galleries, let my curiosity take me to strange places on the internet, listen to feedback from folks with whom I’ve worked, ask for feedback from folks with whom I’ve worked.

Inspiration:  There’s a ton of names that I could throw around, but my greatest sources of artistic, not just directorial, inspiration have been Robert Lawson and Sally Bomer, two of my professors from undergrad. They’re amazing.

Tell us briefly about the Boston theatre scene. How does Happy Medium Theatre and other companies for which you direct fit into the scene?
The Boston theatre scene feels very unique to me because of it’s relatively “small pond” feel.  I find myself feeling a little bit frustrated when I hear about companies inviting talent from other cities before trying to fill the role with homegrown talent.  There’s been a continued conversation in the last few years about theater artists not sticking around the city and, in my mind, a lot of it has to do with feeling like it’s difficult to break through to the next echelon, whatever your specialty.  We’re a city that’s pretty clearly divided; there’s a lot of collaboration between companies existing on the same strata, but not necessarily between.

HMT is a fringe company with its eyes set on continued growth; to what end, none of us are truly certain at this point.  All the companies that I’ve worked for as a director exist on the fringe and I’m pretty happy here.

Do you have any not-so-hidden talents? What would you show-off at a party?
I’m a closet-case singer.  I love to sing but I rarely do it, unless drunkenly during Karaoke.

Do you have any upcoming projects or productions?
A few things in the works, but nothing I can officially talk about yet. HMT is in the script-reading process for our next season’s selections, and I’m really excited about a few of the options that are on the table.