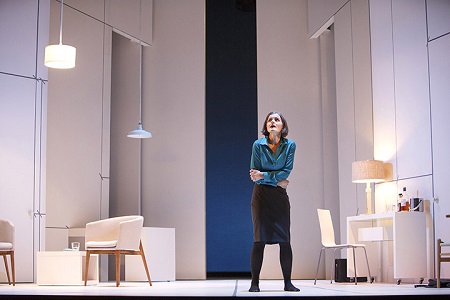 CanStage’s The Other Place is difficult to write about without giving too much away. For the play is reveal after reveal, as we move back and forward in time, uncovering family secrets, buried memories, and emotional turmoil. And yet, as we move down the winding road of this dense, emotional bit of realism, I was not as transfixed as the avid audience surrounding me. While certainly a play that will be greatly enjoyed by many for its cathartic emotional roundabout, it was all a little too much for this critic.

The story is of a successful neuroscientist who, at a conference for the drug she is developing, has some kind of ‘episode’. The question of what happened, and why our heroine Juliana, with her hilarious dry wit, sensible skirt-suit, and bitch heels, has to keep going to the therapist, drive the beginning of the show. Juliana, played by the charming and talented Tamsin Kelsey, walks us through the events as sometime narrator, sometime participant of/in the action. We watch her navigate her relationship with her husband, put up with her therapist, and rebuild a connection with her daughter; all in all, it seems like a typical night of theatre. But nothing is as it seems. Playwright Sharr White has delivered a script that is as beautifully complex as it is medically accurate (or so my psychology companion told me after the show!) If nothing else, the lighting design is cleverly conceived and brilliantly executed. From the complex projection, to stark white lighting, the lighting drastically changed the set from moment to moment, animating the space thematically to great effect. Kudos to lightning designer Michael Walton and the technical team for pulling it off.

However, the emotional nature of this show was too much for me. Not that it was necessarily bad, or that it was ‘too much’ in general terms; it just didn’t resonate. To be fair, it resonated with many in the audience—the middle-aged man next to me surreptitiously dried his eyes in the quiet following the show’s stark, sad, emotive climax.

Go see it. It’s good. If you like realism, which, let’s face it, most of us do., you’ll enjoy The Other Place. This is the kind of show Aristotle invented the word catharsis for: the character goes through hell and back, and we watch: moved, piteous, purged, of our negative emotions. We cry when they cry, and when it’s all over, we think, we’re alive! Theatre’s alive! It is alive in the Bluma—don’t get me wrong. The themes are relatable and the script is clever. This reviewer, however, remained unmoved. Maybe my heart is made of coal. Or maybe it’s just not my kind of show.