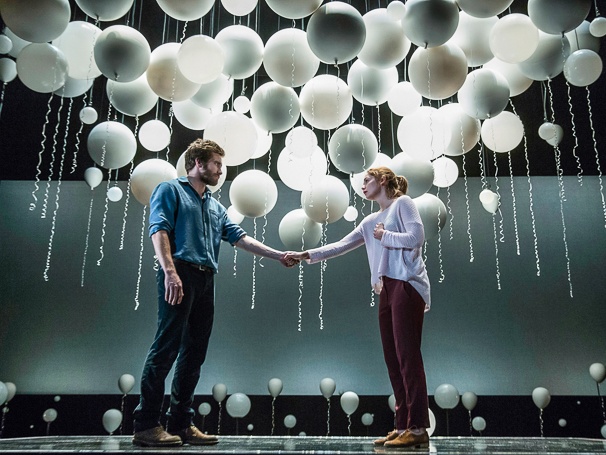 2014-15 are the years that math and science became incredibly cool in popular culture and a staple of popular entertainment. Two of the hottest Oscar contenders for Best Picture this year chronicle the lives of Stephen Hawking and Alan Turing. The cast of The Big Bang Theory is reaping considerable financial rewards for their television show. Just weeks ago, I was captivated by Alex Sharp’s quick-witted explanation of a mathematics problem on stage for a packed house at Curious Incident of the Dog in the Nighttime. Now, playwright Nick Payne is dropping some serious physics knowledge on Broadway, from quantum mechanics to general relativity (and all the string theory in between), in Broadway’s newest hit Constellations, starring Ruth Wilson and Jake Gyllenhaal. Speaking as a woman who was elated to receive a microscope and a telescope for Christmas as a child,* I wholeheartedly endorse these efforts to comingle science and math with mainstream entertainment.

Despite my introduction, Constellations is not principally about scientific matters. Touching on themes of social interaction, relationship development, terminal illness, and even assisted suicide, Constellations is about the convergence of beekeeper Roland and physicist Marianne and their subsequent relationship. Or, rather, relationships. As Marianne explains, some scientists postulate that there are an infinite number of parallel universes that co-exist, therefore, everything that can occur in a persons life does – in one universe or another. The totality of one person’s existence is only a series of actions and consequences strung together in one particular universe. This theory lies at the core of Constellations, in which one possible interaction between Marianne and Roland is repeated multiple times with different results. For example, the pair meets at a barbecue, where Marianne introduces herself by challenging Roland to lick his elbow (what a pick-up line, eh?). In the universes where Roland responds positively to Marianne’s coy behavior (e.g., where Roland is not married or where he is not uncomfortable by Marianne’s efforts to touch her elbow with her tongue), this leads to an evening at Marianne’s home, a rough patch in their relationship involving cheating, an entertaining dance lesson, and a health scare for Marianne. Not only do Roland and Marianne’s actions and reactions vary at each meeting, Marianne and Roland’s personalities vary between the universes as well. For example, in one universe Roland is shockingly timid when asking Marianne to marry him and, in another, he responds to a disagreement with uncontrollable anger and physical violence.

Payne’s unique embrace of the multiverse setting draws attention to the plethora of choices and consequences that each person faces at any given point in time, but Payne also takes advantage of the multiverse concept to free himself from the constraint of linear story-telling.** For example, in one scene, Marianne and Roland are getting to know one another. In the next scene the couple is facing Marianne’s impending death. Then, Roland is trying to get up the courage to ask Marianne to marry him.

A myriad of possibilities, unconstrained by time – sounds like a story-teller’s playground.

When the play began, I felt a general unease with the repetition of sequences – fearful that the process would quickly become tedious. To the playwright’s credit, Constellations deftly avoids this potential plot pitfall. Each sequence explores so many nuances from statements made, to the body language utilized, to each character’s emotional responses that there is very little to grow weary of, and Payne brilliantly explores these components of humanity while slowly building a classic tale of love and loss. Brevity is Payne’s friend – the play runs a brisk 70 minutes without intermission, which allows the playwright to explore each of Roland and Marianne’s interactions in numerous universes without the device becoming stale.

While Payne certainly merits credit for writing this beautiful and intelligent play, actors Ruth Wilson and Jake Gyllenhaal deserve accolades as well for their stunning performances in this complex work – among the best performances that I have seen from either actor. Ruth Wilson first caught my attention to 2010 in the popular British crime drama, Luther, playing the curiously enticing sociopath Alice Morgan, and she has most recently been seen in Saving Mr. Banks and The Affair (for which she just won a Golden Globe). While undeniably talented, Wilson’s performance as the bright, awkward, hilarious, vulnerable, and frustrated Marianne (along with at least a dozen other adjectives – a byproduct of the multiverse construct) is perhaps her best. In a two-person play, an actor is perhaps only as good as their onstage partner, and Gyllenhaal compliments Wilson beautifully. The two develop a comfortable rapport and a believable chemistry on stage, which is no easy feat given the non-linear story-telling and ever shifting motivations/personalities of their respective characters. Sitting in the front row of the Friedman Theatre, I was exceptionally close to the action on stage*** and noted the fine dance that Gyllenhaal and Wilson had to do around one another as they quickly moved from one sequence to another. It was both mesmerizing and impressive.

In addition to masterful acting, Constellations is a play that relies heavily on scene and sound to orient the audience, and designers Tom Scutt (Scenic Design), Lee Curran (Lighting Design), and David McSeveney (Sound Design) have crafted a multiverse playland. Scutt’s set is stunning in its simplicity – the dark set is punctuated by dozens of white balloons, with more balloons cascading from the rafters. Signaling the shift from one universe to another, ripples of light and a clamor of sound traverse through the balloon-filled air, creating a rather spectacular effect. In addition to these technical artists, Lucy Cullingford served as Movement Director for the show and, as I already stated, the physical interactions between Gyllenhaal and Wilson are quite striking.

The quality of plays this season has ben quite exceptional, but Constellations truly stands out as a smart, engrossing, visually-stunning production with adept acting by two phenomenal actors. Tickets are difficult to come by, but do not pass up an opportunity to see this play before it closes on March 15 – I will be surprised if it does not garner at least a few Tony nominations.

*You don’t grow up with Bill Nye the Science Guy without picking up an appreciation for scientific conquests. The microscope also came in handy when I went through my “detective” phase and ran around the house collecting fingerprints.

** After all, if there are infinite variations of a single event and all variations happen, does it really matter whether a series of events is presented in a traditional, linear fashion?

***Entirely too close, really – I generally prefer not to be showered in actor spit. Yes, even if that actor is Jake Gyllenhaal.