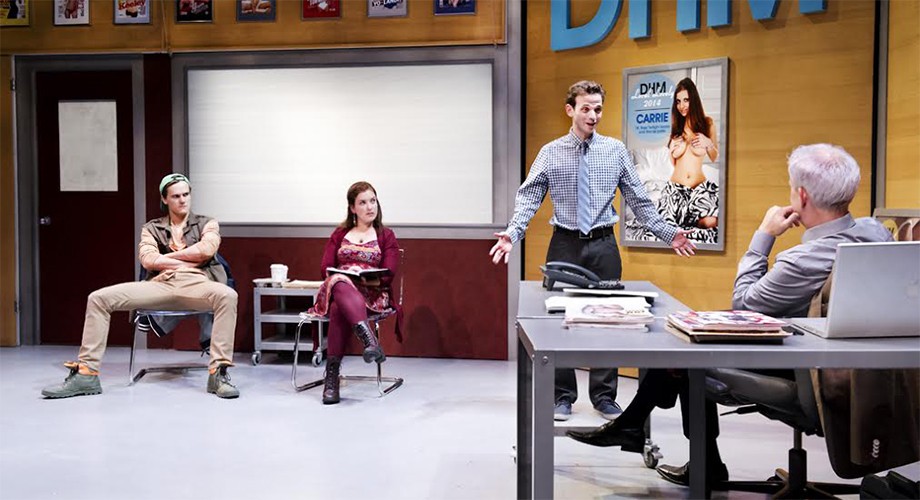 Studio 180 is Safe for Work

Studio 180 is a great company that consistently produces interesting, well-executed work. It’s therefore extremely unfortunate that no one seems to see their shows. The new Theatre Centre is rarely full but there have been performances of NSFW where it’s been nearly empty and, if it weren’t for a stray mid-run Facebook post, I wouldn’t have heard of this show’s existence at all.

Considering the kind of attention-grabbing campaign that could have been launched for this re-tweetable show, the lack of buzz is an interesting indicator of some of the problems with the production, and the play itself. The most glaring thing is playwright Lucy Kirkwood’s intense focus on the print media despite having written the play as recently as 2012, when the image of the girl that makes up the central trouble of the play wouldn’t have been confined to the pages of a magazine awkwardly purchased by her father- she would have gone viral. Kirkwood’s points about how publications targeted at men portray women are valid ones, they’re now just a lot bigger than she presents them as being. Similarly, the men in the play who are active participants in the objectification could stand to be more infuriatingly unapologetic about it. Playboy Rupert (as close to an average male voice as the play has)- here played as a likeable tool by James Graham- doesn’t say anything in NSFW that comes as any sort of wakeup call at all (which is sad, but that’s not the point). Unlike the casually cruel male-only repartee in Neil LaBute’s Fat Pig, for instance, Rupert’s youthful posturing doesn’t open any truly closed doors on bad behavior. Even Patrick Galligan’s shrewd, devastatingly manipulative boss character reveals his fair share of empathy in dealing with the crisis (at least in private; his brutal takedown of the girl’s father is more than icy). Aaron Stern’s character Sam is written as the voice of quasi-feminist reason but his struggle to be heard would have ten times the impact in a scene swept up with the faster-paced banter of a hyper-male culture full of deeply ingrained insensitivity rather than a couple of silly, shout-down-able men who like boobs and try to respect the boundaries of their savvy female coworker. Sure, Kirkwood’s righteous rage could translate to some stronger dialogue but the lackadaisical pacing and polite blocking of Studio 180’s production does nothing to really set the scene.

On the flip side, the questions raised about women’s publications as explored in the play’s second half hit home a lot more effectively. Not only are Kirkwood’s insights more, well, insightful in discussing the demands made on women by the media but Susan Coyne’s coiffed and compromised editor is the sort of thematically rich portrayal that can make the playwright’s point for her (she also keeps the pace up, for which I’m eternally grateful). The second half of the play feels more personal, as though Kirkwood is addressing direct issues she’s encountered rather than issuing a general complaint and imagining the perpetrators. Coyne’s Miranda never stays still for long; she’s constantly adjusting, applying or posing, as though the least comfortable place in the world is her own skin. In a point driven home by a throwaway cameo by Rupert in the play’s second half, the poking and prodding and maintenance of a woman’s life as dictated to us by magazines theoretically created by and for us is almost more damaging than the false ideals of us perpetuated by magazines created by and for men. Like Kirkwood, the cast and creative team at Studio 180 seem to better understand the female-driven side of the issue and the production picks up dramatically when that shift occurs.

It would be less glaring if Kirkwood had named her play literally anything else but NSFW struggles from a lack of shock factor. Not only do we already know everything Kirkwood is telling us, we actually know the situation to be worse since she doesn’t even scratch the surface of twitter and buzzfeed and, god help us all, cosmopolitan.com. There are good ideas at the heart of Kirkwood’s flawed text but, with the exceptions of Coyne and Galligan (whose layered performance I feel I might have undersold), director Joel Greenberg and his cast don’t mine it for everything that’s there. The men’s scene, especially, needs to be faster and more thoughtless, representative of a culture that’s progressing too fast for our backwards ideas to keep up.