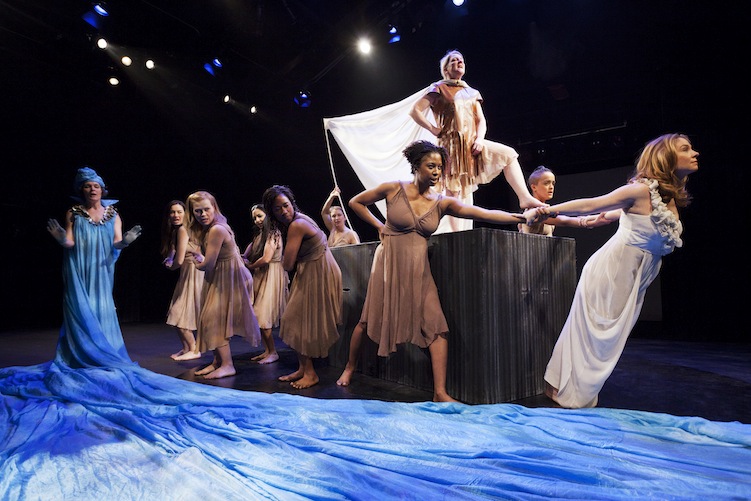 Walking into Buddies in Bad Times Theatre is always an entirely new experience. One of the more versatile spaces Toronto has to offer, the Buddies stage played host to two massively different productions in the past few months, both of which had something big to say.

In October I had the distinct pleasure of getting to see Larry Kramer’s The Normal Heart, produced on a blank expanse in the middle of the Buddies black box, surrounded by audience on all sides. As staged by Joel Greenberg, the effect was that of scrutiny, of the audience starring in on the crucial and world-altering decisions of the characters on the front lines of the fight against AIDS at its first outbreak- examining them, judging them, to great effect.

In 1985 New York, The Normal Heart was groundbreaking, valuable and more than incredibly necessary. In 2011 Toronto, it remained a superb piece of theatre- just as striking, just as angering, just as heartbreaking and just as valuable- even as it transitioned from timely political piece to enlightening history play. I almost cried as the young gay man sitting in front of me told his friend that he didn’t know a soul who had the disease in question- it’s not a moot point, but by god it was nice to be reminded just how much more conquerable that particular threat has become in the time since Kramer first set Ned Weeks upon the horrifically apathetic world.

As Kramer’s proxy, Jonathan Wilson’s Ned thundered away as his world crumbled around him. Wilson tightrope-walked the dangerous territory of condescension and anger with the dexterity of someone far more subtle than Ned, a balancing act that allowed the weighty play to rest solidly on his shoulders for the full 150 minutes. I love a story of unpopular politics and in Ned I found a hero of the most tragically worthy sort. He’s right in his incredulity towards his community, his fury at the irresponsible stubbornness of clinging to the more dangerous elements of gay culture, his self-righteous annoyance that no one other than him seems to understand the threat or be willing to speak up on behalf of the dying. He’s right. But he’s awful, so no one listens. Ned wants to believe in a world where no one would think twice about standing up for gay rights out of fear that they’d be outed themselves, where the right to promiscuity isn’t considered as important as the right to equality and consideration and basic attention, where the fact that human beings are dropping like flies would unconditionally be of concern to the greater public. Ned is a character who believes the world should be the way he believes it should be, he makes no considerations for how it actually is, and thus he alienates everyone who might have been listening to him in the first place and ensures he has no power for change at all. It’s a fascinating character, a complexly real one who’s own anger drowns out his fundamentally right points. And in the hands of Wilson, and Greenberg (who littered the stage progressively throughout the second act until Ned’s world was a literal mess), Ned was a heartbreakingly frustrating person to care so much about.

A superb ensemble cast rounded out the production: Sarah Orenstein’s badass Dr. Emma Brookner, a wheelchair-ridden toiler for whom small steps seem the only solution; John Bourgeois’ conflicted Ben, Ned’s macho, cowardly but well-intentioned brother; Paul Essiembre’s straight-backed and principled Bruce, the politically correct solution to Ned’s greatest fears; Ryan Kelly as the stubborn but vulnerable Mickey- an advocate for the metaphor of progress; Jeff Miller, stunning as Ned’s partner Felix- a confidently together guy whose illness takes on a world of symbolism for his tortured boyfriend. I was less impressed with Jonathan Seinen’s affected Tommy Boatwright. I would have loved to see Jim Parsons’ recent Broadway take on the role as the quietly kind Tommy felt like a character I could really love. In fact I would have loved to see the entire recent Broadway cast (John Benjamin Hickey and Lee Pace being longstanding favourites of mine) but the ensemble of Studio 180’s production at Buddies in Bad Times made me forget almost entirely about the stars of the Tony-winning revival.

The Normal Heart proved to be one of those rare theatrical experiences that leaves me shaking in my boots. Tears streamed uninhibitedly down my face during scene after scene. I’ve long been tired of the North American impulse towards the standing ovation- they’re given to freely, to just about any performance, simply because someone in the front row stands and blocks the view of the stage- but it’s pieces like The Normal Heart that are the reason the standing O exists. The moment the final blackout was called, every soul in the theatre jumped directly to their feet; I’ve never seen a reaction so ebullient, so passionate, so instant.    Perhaps not as he intended, but Ned Weeks did manage to get us to our feet.

For the current Nightwood Theatre production of Margaret Atwood’s Penelopiad (playing at Buddies until January 29th), the black box is configured to replicate a more standard proscenium setup. The audience is all on one side, raked and starring down at the flat, rectangular playing space. Set designer Denyse Karn transforms a simple concept into a beautifully functional stage with versatile moving platforms, boxes and staircases. Moved fluidly by a superb chorus of women who literally and metaphorically hold Penelope’s world together, the simple, stark and strong design sets the stage for Penelope’s story and Atwood’s message.

That message, as crispily preachy as it might be, is delivered with brilliant empathetic clarity by Megan Follows. A massive Anne fan, I was more than psyched to finally see one of the country’s most beloved actresses on stage, and Follows doesn’t disappoint. Her famous romantic intelligence and low-voiced grounding give great maturity and spine to the flowing-white-dress role. But it’s Follows’ humour that gives Penelope the heart that inspires us to care about her plight (and forgive her transgressions). The slight snark in Penelope’s from-beyond-the-grave narration, the hint-hint-wink-wink of Follows’ delivery gives the mythological queen a relatable realism that allows us to see her as not only human but specifically as a part of our world.

While the hyper-stylized movement and mildly corny singing bits occasionally lifted me out of the action, they break up the potentially draggy pacing and are executed well by the capable chorus of women spanning all ages, races, sizes and types. Cara Gee is a particular highlight as strong-willed maid Melantho. Kelli Fox is also supberb, doubling as Odysseus, while the beautiful Bathia Watson is a wonderfully petulant Telemachus and Tara Rosling a fantastically aloof Naiad. The aesthetics of The Penelopiad are stunning, Rosling’s Naiad robes held flowingly aloft by the vesatile chorus, Follows entering through a pool of ethereal light emulating upstage centre- they’re somehow simple but other-worldly, achieved largely through straightforward design and the tangible actions of Penelope’s maids.

The Penelopiad is an overall excellently executed piece of modern theatre, but the hangups in the not-so-subtle script are endured rather than more appropriately minimized. A staunch feminist, Atwood’s goal with The Penelopiad is to humanize the 12 maids who are carelessly killed upon Odysseus’ return, and to re-frame Penelope herself as more of a thoughtful and strong woman rather than the dutifully passive creation of the myth. Those are admirable goals, and the heinously misogynist history of the myth’s simplification of Penelope and easy dismissal of the maids as corrupt philanderers could use a good rewrite. But the sort of full-force swing in the opposite direction that Atwood takes in her script does her cause no favours. With the occasional humanizing moment thrown to Odysseus along the way, the men in The Penelopiad are savage, brutal, irredeemable neanderthals- a point made inescapable by director Kelly Thornton’s characterization of Penelope’s suitors and Karn’s animalistic costuming. I take Atwood’s (and, by extension, Thornton’s) point, it’s a good one, but to tell a tale with more balanced gender perspective requires at least an iota of balanced gender perspective, this just seemed prosecutorial.

The Penelopiad is a production not unlike Ned Weeks as a character- loud, angry and essentially right; the former qualities casting the later into shadow and ultimately eclipsing it completely.