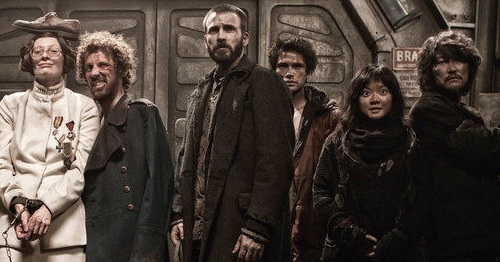 I was skeptical, at first, about this dystopian Noah’s Ark adapted from a French graphic novel and starring Captain America (forgive the unfairly depreciative evocation; I’ve always liked Chris Evans and know full well that most of the major superheroes right now are actually pretty good actors, but you know what I mean). The first act of Joon-ho Bong’s masterful thriller/morality tale bears the all-too familiar semiotics of basic contemporary dystopia, lulling the viewer into expecting merely the expected. As he moves his beautiful, dirt-smeared underdog hero (like so many beautiful, dirt-smeared underdog heroes before him) through his predestined rebellion, Bong transforms Snowpiercer into an allegorical tour of cinematic styles.

Your basic “earth as we know it is destroyed, what’s left of humanity now falls under a fascist regime that keeps the lower classes helplessly underfoot” premise is enlivened right off the bat with a climate change element and “humans destroy themselves in their attempt to take the easy way out in saving themselves” disaster (this film is like a thematic feast, just asking to be written about in thesis papers). The sole survivors were aboard The Snowpiercer at the time of tragedy, a trans-global train with a self-sustaining ecosystem, impervious to the outside climate. 18 years post-apocalypse (in this case a man-made deep freeze that turned the world into an uninhabitable replica of Toronto circa December 2013), the Snowpiercer encompasses an earth’s worth of socio-economic stratification, the unalterable classes assigned in accordance with the price of each passenger’s original ticket; first class affords you food, comfort, education and (perhaps most notably) space while the lowest class is kept cramped, dirty and hungry at the back of the train (if you’re at all inclined to believe this is cinematic exaggeration, I’ll refer you to the fact that no lifeboats were allotted to the third class section of the Titanic and the gates separating third from first and second class for “health and immigration reasons” were kept shut long after the ship began to sink).

As the rebellion fights its way from the tail section towards the deified engine, a strongly stoic Evans leads his dwindling numbers through a series of cars, encountering further gentrification and fewer and fewer occupants the closer he gets to the first class front. Bong emphasizes the otherworldly realities of each new class with dramatic shifts in cinematic style. What begins with the decrepit high/low tech mixture of an Elysium-like future-set film at one point begins to look like something Wes Anderson might have directed (the classroom scene in question is one of the movie’s best) before detouring into an almost Downton-esque lounge car, an opulently hip club atmosphere, the serene spas and beauty parlors of a foreboding middle-class Sam Mendes hellscape, the grand score-swelling heroics of a mainstream action blockbuster’s third act and the gut-punching future-realism of a Children of Men dystopian tone. For one film to speak all those languages within a single, successfully realized world seems unlikely but Bong’s deft hand sews them together as an encapsulation of not just the film landscape but the human landscape, captured in two hours on single train as it rushes around the world we destroyed. Also, “I was the man with the knife” kicks the ass of “I am the one who knocks”.