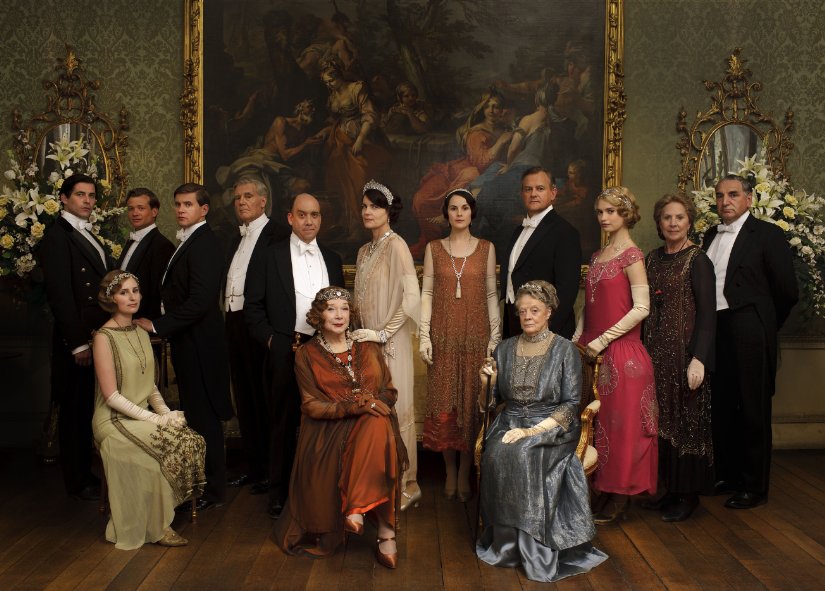 The Downton Abbey season 4 finale was an absurd spectacle, filled with gorgeous costumes, over the top romantic plots, rich people problems and a ridiculous caper. It was probably my favorite episode in a long time.

The fourth season of the show felt darker than previous ones, and had some of the most compelling stories in a while, but it didn’t feel like Downton. Even at its strongest, Downton has never really been groundbreaking television. Personally, I started watching because I like period pieces, I like stories showing the upstairs/downstairs dynamics of English houses, and I like Maggie Smith. That is what I signed up for with the show, and it’s not always what I got.

I thought the Christmas special did a good job bringing back some of the absurdity of the first season, especially Rose’s storyline. Rose somehow befriended the Prince of Wales’s mistress, who has a scandalous letter stolen. Robert decided that because it was somehow the Crawley family’s fault, so they had to steal it back. Thank goodness they had Bates, an ex-convict in their staff, because while the Crawleys can plan an excellent ball, crime is not their forte. Watching them flounder, completely out of their depth to avoid scandal reminded me a lot of season 1, when Mr. Pamuk died while having sex with Mary, and they had to drag his body across the house. For some reason, I just really like to seeing the Crawleys completely out of their depth in absolutely ludicrous situations, okay?

There were some more serious storylines, such as Edith’s. She had a child out of wedlock and gave her to a family in Switzerland.  But by the end of the episode she decided to take her daughter back and give her to a farmer who works in the Downton estate. It was just nice for Edith to have something to do other than be the bitter middle daughter. I’ve been wanting her to get more substantial storylines since season 2, so it was about time. There was also the subplot of Bates possibly having murdered his wife’s rapist, but apparently we’re going to ignore that.

That’s why I prefer my Downton pretty and fluffy rather than dark and heavy; it never feels sincere about exploring unsavory topics. Mary was absolutely right to have qualms about protecting a potential murderer, but because Bates is loyal to the family, it was okay to let it slide. A lot of times Downton has ‘darker’ storylines because they make for melodramatic plots, but their resolutions are almost always fumbled. If a storyline is no longer shocking, it has served its purpose, and is discreetly shoved under a proverbial rug. Instead of teasing the audience the prospect of taking on heavier subject matter, I’d rather Downton stick with what it’s good at.

One of those things is a good old fashioned love triangle. Mary has men pursuing her left and right.  It’s getting hard to tell the difference Gillingham and Blake any more. They’re both charming intelligent, and madly in love with Mary. At one point they were referred to as “Mary’s men”, which about sums it up. Blake and Gillingham both get muddled together in my head, with their constant declarations of love. Luckily for me, I enjoy period dramas with handsome men proclaiming their love with the most romantic speeches they can muster.

While the Mary/Blake/Gillingham love triangle is still in full swing, I think finally, finally, the Daisy/Alfred/Ivy mess is done. I thought it was done when Alfred left Downton Abbey, but it wasn’t. He wasn’t even in this episode, but he wrote a letter, and it stirred up drama between Daisy and Ivy. I liked the American valet who took a shine to Daisy, and I almost wish she had accepted his offer to come to the States and be a cook there. Not because I don’t like Daisy, because I do, but the show feels like it is running out of ideas for her. Luckily Ivy swooped in and took the position when Daisy declined. I never had the chance to like Ivy, because her character wasn’t developed any further than, “girl the two guys fight over”, so maybe this is for the best.

Surprisingly, I found myself liking Mr. Mosely this episode. He and Ms. Baxter’s relationship has given them both more depth as they find strength in each other. It also helps Mr. Bates is no longer being treated as cheap comedic relief. I also found myself liking Harold, Cora’s American brother (played by Paul Giamatti) and Madeline Allsopp, one of Rose’s friends. It was the first time either of them had been on the show, but their scenes together were enjoyable and had more spark than some scenes with well-established characters. I liked Harold much more than Martha, Cora’s mother (Shirley MacLaine). Martha has been on the show before, and while MacLaine can throw out snarky one-liners like a pro, Martha’s, “I’m modern and American and I don’t care about titles and tradition” bit gets annoying fairly quickly. Harold also did not fit in with the British upper crust, but he had more to his personality than loud and American.

The fourth season finale wasn’t a perfect episode of television, but it was an enjoyable one. It’s not something I’m going to stop and think about too hard. I for the most part, liked it. I could nitpick about things (Thomas needs something to do other than be evil. Ms. Bunting isn’t a necessary character), but I won’t. I’m just going to sit back, relax, and enjoy a well-dressed, slightly ridiculous guilty pleasure.