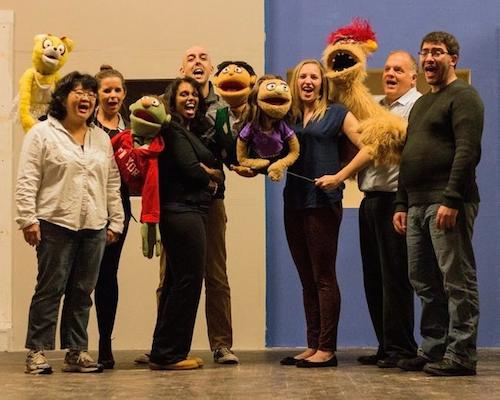 Seeing that I was in a festive upbeat mood, it being my birthday and all, I decided to forget how many figurative candles were on my cake and I took my somewhat conservative wife and theater-savvy teen daughter to see Avenue Q at Arlington Friends of the Drama (“AFD”) Theatre. We were treated to a sassy, funny, and heartfelt version of Broadway’s breakthrough (and hugely successful) coming-of-age parable that is often described as “Sesame Street for grown-ups.”

AFD Theatre’s version of the popular Tony-winning musical with lyrics and book written by the trio of Robert Lopez, Jeff Marx and Jeff Whitey, certainly captures the spirit of the show with strong performances. It opens to a set designed by Brian Higgins that, in a minimalist sense, captured the image of a gritty urban street called Avenue Q. There is some interesting juxtaposition of graffiti with “1, 2, 3” and “A, B, C” alongside the phrase “Tough Love,” hinting at the more urban realities that lay beyond Sesame Street. Doors and windows open and close at various times, reminiscent of the old 60’s TV show Laugh-In. That being said, it could have looked a little more dumpy and gritty, which would have set a more accurate tone for the show.

For those unfamiliar with Avenue Q, it is a unique combination of live actors and puppets. Sometimes, two actors operate the same puppet. Other times, a different actor may represent the voice of a puppet that he or she is not operating. The actors animate the puppets but make no effort to conceal themselves as actors. I found this to be one of the show’s best aspects, as it gives the actors a chance to act as well as manipulate the puppets. I watched the actor’s faces as often as I watched the puppets themselves. This kept my eyes very busy, but in a very good way.

The lead puppet character Princeton (wonderfully handled by Justin McCoubry) is a recent college graduate, looking to discover himself; he finds his way to Avenue Q where he secures an apartment for himself. His new neighbors are Kate Monster (Ruthie Fontanella), a kindergarten teaching assistant; Rod (also McCoubry), an anal-retentive banker, and Nicky (Scott Giangrande), his slacker of a roommate; Brian (Paul Alperin), an aspiring comedian recently laid off from his day job, and Christmas Eve (Vivian Liu-Somers), Brian’s Japanese fiancée and a therapist with no clients; Trekkie Monster, a cranky recluse who surfs the Internet all day in search of porn; and Gary Coleman (Lali Haines), the building superintendent (yes, a grown up portrayal of Gary Coleman from the TV show Different Strokes).

As we become drawn into their relationships and predicaments, we soon forget that the characters are mere puppets. Their stories are too real, and we can relate to them. There are some truly memorable scenes. Kate and Princeton eventually hit it off and ending up having some very energetic sex (“You Can Be as Loud as the Hell You Want When You’re Makin’ Love”). My wife was squirming during this scene, but the rest of the audience (and my daughter) seemed to enjoy it. The residents of Avenue Q realize that racism is a common reality, and they sing “Everyone’s a Little Bit Racist”. Some may find that number uncomfortable, but I thought it was one of the best in the show. Our favorite number was Fontanella’s Kate Monster singing a moving rendition of “There’s a Fine, Fine Line”. Fontanella has a beautiful voice. I wished she had more opportunity to showcase it.

The story continues to weave themes of deception, misunderstandings, racism, unemployment, and financial woes. The characters play out the conflicts and angst that we all confront in the relationships and the socioeconomic realities of our daily lives. This is what makes the story hold our attention; we have been there. What makes us enjoy it is the strength of the performances which are often nothing short of captivating. McCoubry is an absolute standout. He was “one with his puppet”; he did not merely move and speak for it, but he displayed its emotion simultaneously. We are experiencing two performances for the price of one. That is difficult multitasking and McCoubry does it smoothly and convincingly. Fontanella shows similar worthiness with a singing voice as smooth as silk. The rest of the cast is fine, although I found Christmas Eve to be somewhat hesitant, not nearly as over the top as I would like to have seen.

Avenue Q marks director Kevin Mark Kline’s first return to AFD since 2012, when he directed Death of a Salesman, and it is the second AFD musical he has directed since I Love You, You’re Perfect, Now Change. He does an excellent job here. The flow was smooth and clean. His best touch is having the actors wear the same accessories as their puppets. In the Broadway version, the actors wear all black, as if they are being cloaked. Having the actors appear in the same persona as their puppets produced more rich and satisfying performances, and helped sets this production apart.

The appreciative and enthusiastic audience agreed that the entire production is a wonderful entertainment package, bringing the humor and angst of urban realities to a little street where life is more than just learning your ABC’s.