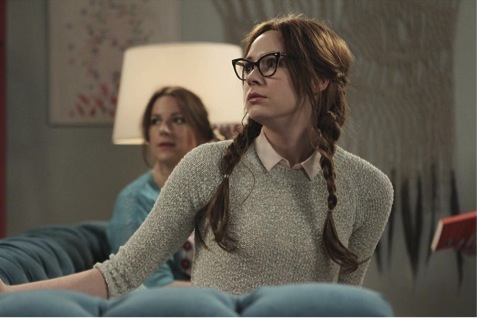 Hey guys, remember when I was all, “gosh I hope Selfie turns into a good show because I love John Cho and Karen Gillan”? Looks like the creators did too.

It’s pretty usual for sitcoms to have a rough patch in the beginning, but in its second episode Selfie comes out strong. They double down on the interpersonal dynamic between Henry and Eliza, making them both weird and specific, rather than manifestations of two opposing viewpoints. This has the added bonus of keeping the show from feeling too misogynistic and too “kids these days.” YAY!

Much like the subtle shift away from “Suburbs are bad!” to “Chatswin is wacky!” in Suburgatory, Selfie’s second episode promises a show that is about two weirdos. In this episode, we really get to dive into just what a fantastic comedic performer John Cho is. He may have been the ostensible straight man in Harold and Kumar, but he was amazingly hilarious at it, never getting lost in Kal Penn’s antics.

He’s even better here. I could spend days watching him desperately try to un-tag himself from a picture of an ex-girlfriend’s breast-feeding baby. The aforementioned gag, the natural escalation of Henry’s decision to join Facebook and succumb to its addictive qualities, is incredibly inspired. Like much of Selfie’s social media-influenced gags, it’s spot on and specific. Most internet jokes on television feel like a joke written by someone who unironically thinks of the internet as “a series of tubes.” Selfie, however, feels like a lived-in millennial kind of show. This also keeps the episode from falling into the lame “kids be crazy!” trope that it threatened to turn into last week.

And Cho really cannot be praised enough. He’s hilariously inept, even while maintaining the central “stick up his ass”ness that characterizes Henry. His chemistry with Gillan is also fantastic. It plays right on the border of overtly romantic (and of course the show will go there at some point), but it isn’t over the top. I’d be so happy if these two characters ended up with a Jack and Liz vibe more than a Betty and Daniel vibe, but I’m okay with it either way.

The show also delved into some legitimate character development this episode! Henry’s work-heavy past is a cliché, but an effective one. Eliza’s lack of self-esteem, such that she’d be REALLY excited that a guy was willing to “walk outside” with her, is going to get old real fast, but played really well this episode.

Plus this episode was laugh-out-loud funny, in that fantastically absurd way that creator Emily Kapnek excels at. The repetition of the word “sup” was both a spot on social commentary and hilarious. Henry’s rant about Mark McGrath was… a thing of beauty, even if I question somewhat why Henry would be obsessed with the blond-tipped singer. And I think my new go-to, I’m-too-busy-to-talk-right-now line will become, “Eliza, my ex thinks I have a lactating fetish. Can we regroup on this?”

The show still needs to flesh out its side characters, lay off on the misogyny, and deepen Eliza (without losing her essential narcissism), but as long as it doubles down on funny one-liners and its fantastic two lead performers, I’m in.