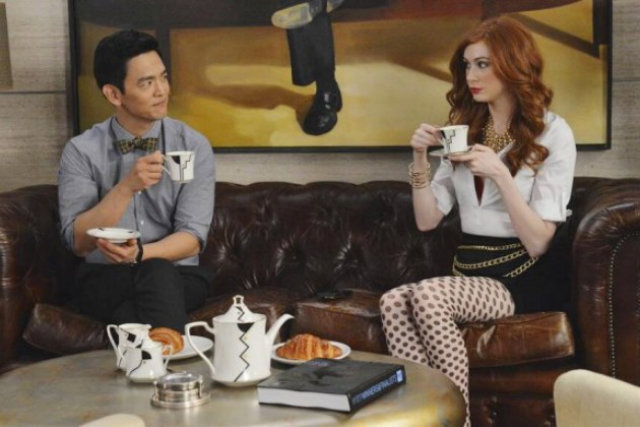 A modern adaptation of My Fair Lady that doubles as a criticism of our modern, narcissistic, easy-gratification culture. Where could that go wrong?

Selfie, the new comedy pilot from ABC starring Karen Gillan and John Cho, is about a flighty, social-media obsessed sales woman (Eliza Dooley, get it?). After an embarrassing moment of her’s goes viral, she realizes she has no real friends and needs a rebranding. She cajoles the new guy marketing expert at her workplace, Henry (Cho), into taking her on as the human version of “Rebranding medicine that causes satanic hallucinations.”

I could easily nit pick this pilot all day. Let’s start with the stuff I just mentioned! The humiliating plane moment isn’t nearly humiliating enough to go viral, even if we assume that everyone was just waiting for Eliza’s downfall. And what the hell are satanic hallucinations anyway?

Eliza is insufferable for most of the pilot. This is inevitable of course, since this is a redemption comedy, but it’s too much to really buy into her as a fully formed human. She doesn’t feel so much like a character as she does an overly-made-up personification of an old man’s “kids these days”speech. And as for that old man? Cho’s Henry isn’t a very interesting or endearing presence either.

None of that is due to Cho or Gillan, who do the very most they can with the broad material they’ve been handed. It’s a major bright spot in a comedy pilot that feels forced in the worst kinds of ways.

The other bright spot is the occasionally really funny dialogue. Emily Kapnek, who created Selfie, also created the similarly broad and disappointing pilot for Suburgatory , which turned into a really satisfying show. My hopes for Selfie is that it can both dial back the ugly over-the-top-ness of the pilot and double down on the goofy specificity that this world has built right in, as well as capitalize on the leads’seemingly-endless charisma. While we’re at it, let’s also ease up a bit with the “they hate each other, but isn’t there just something else there?”  crap. Don’t get me wrong, it’s inevitable. It’s there in the source material, and it’s definitely there in the pilot. But this level of bashing me over the head with it is going to get old REAL FAST.

Additionally, much like the broad “Suburbs”bashing of the pilot of Suburgatory, the “modern culture”criticisms inherent in the premise of Selfie better grow into something more specific and less crotchety. I’m confident they can – eventually Suburgutary overcame its hipster aversion to smaller town life to create a wonderfully varied, intriguing world. But I will never be able to get on board with a series who’s main point seems to be “smart phones are killing humanity.”If for no other reason than without smart phones THIS wouldn’t exist.

In all, to answer the question I posed back up at the beginning: What can go wrong? Turns out everything you expected, but with enough glimmers of hope that I’ll be sticking around for a few new episodes.