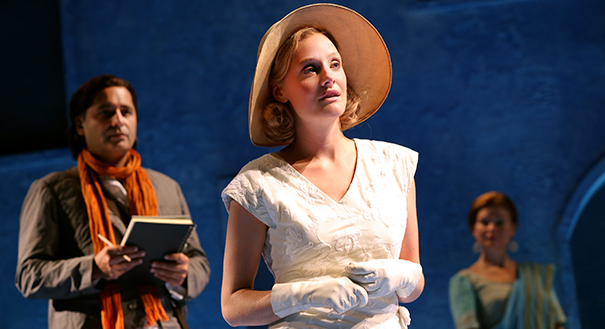 I have a bit of a crush on Romola Garai’s professional acting choices. That’s not weird, is it? I mean, she is attracted to playing fantastic, intelligent, driven females. From her portrayal of an independent thinker and the wife of abolitionist William Wilberforce in Amazing Grace* to her portrayal of an ambitious young producer for the BBC in the 1950s in The Hour, Garai habitually delivers impressive performances. So, when I heard that she should be starring in Roundabout Theatre Company’s new off-Broadway production of Tom Stoppard’s Indian Ink, I was thrilled. While Garai’s streak for picking intriguing female characters continues unabated, Indian Ink is less compelling than it should be and, ultimately, is a bloated, muddled mess. Sorry, Mr. Stoppard.

What truly disappoints me about Indian Ink is that it is precisely the sort of play that I should adore. Indian Ink sounds riveting – it is a period piece set against a backdrop of political unrest with a female lead whose artistic work challenges social norms. However, Stoppard’s play needed another round of editing before this piece was brought to the stage. Indian Ink is the story of poet Flora Crewe and her travels in India in 1930. Shifting between 1930 and the 1980s, Stoppard uses academic Eldon Pike’s (portrayed by Neal Huff) effort to write a biography on Flora Crewe to introduce the audience to Flora’s life. And what a life it is. Eldon learns about Flora through the letters that she sent to her sister (portrayed by Rosemary Harris), including revelations that Flora was privy to political conversations and confrontations regarding the independence movement, that she explored Indian culture through discussions on art and religion, and that she may have posed nude for a painting (the scandal!). From maharajahs with ostentatious car collections to dashing young British officers who spend their evenings at exclusive clubs, Flora is wooed by any number of interested men during her time in India but it is her personal painter, Nirad Das, who catches her eye.

Sadly, Stoppard never quite achieves a proper balance between political commentary and plot-forwarding conflict, and scenes are frequently bogged down by debates and discussions that seem mere trifles in comparison to the rest of Flora’s adventures. Scenes at the local English club are particularly action-halting and caused my attention to stray repeatedly (typically to the two annoying men snoring in front of me).** Never before have I attended a play that I would prefer to read than see performed, yes that is precisely how I felt upon leaving Indian Ink.

Ramola Garai does not disappoint as the intelligent, vibrant, and eloquent Flora Crewe. She deftly portrays a woman who lives slightly outside the accepted social norm. Portraying Flora’s sister is the illustrious Rosemary Harris. Harris is undoubtedly a talented actress, but her age is showing a bit and her delayed and dropped lines throughout the show were noticeable. Firdous Bamji portrays Flora’s painter and love interest Nirad Das with a coy, self-assured demeanor that is oddly enticing, and Neal Huff’s academic Eldon Pike walks a fine line between overwhelming and adorably nerdy, much to my delight.

Indian Ink is a play that lends itself to gorgeous technical design. There is a vibrant energy infused in the culture of India that I was hoping to see displayed on stage in the set design. Unfortunately, Neil Patel’s design was surprisingly muted and did very little to transport me across the world. Candice Donnelly’s costume design was respectable for a period piece, although it too was underwhelming (and the 1980s design seemed almost an afterthought).

I am accustomed to giving Roundabout productions rave reviews, and I can only hope that Indian Ink is a disappointing abnormality in Roundabout’s schedule this year. Tom Stoppard fans need not fear – Roundabout is currently reviving his celebrated play The Real Thing on Broadway. Perhaps patrons should skip Indian Ink in anticipation of better things to come from Roundabout.

*William Wilberforce is one of my favorite historical figures, and if you have not seen this film, check it out and be inspired (it also stars Ioan Gruffudd, Albert Finney, Michael Gambon, and Benedict Cumberbatch – need I say more?).

**Soapbox: is there a sleep epidemic of which I am unaware? I live my life on three to five hours of sleep per night and have not fallen asleep in a theatre – ever. If you have no intention of watching the show, then, please, stay home and nap in your bed. Thanks.