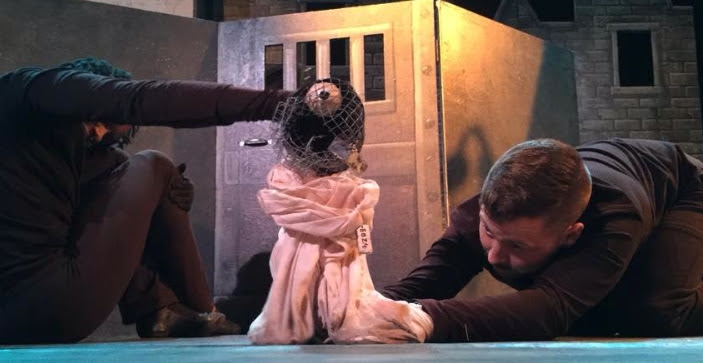 Puppets Walk Among Us

Artichoke Hearts’ We Walk Among You, the puppet show at the tarragon extraspace, is one of the most emotive, and beautifully executed theatre pieces I’ve ever seen.  From the world they create, the creatures they bring to live, and the complex story they tell,We Walk Among You is a beautiful, funny and sad story not to be missed.

We Walk Among You presents a chilling, painfully beautiful tale of a scientist trying to bring his son back to life. While the story does not focus on the scientist character alone, his Frankenstein-esq narrative is the launching point for a stream of clown-like scenes, which all work to paint this complex world. As he struggles to give life to his son, he feeds his insane, incarcerated wife; plays ball with his weirdly-loveable, dog-like igor companion; creates adorable, desire-driven experiments; ignores the sexual passes from his hilariously busty, red-lipped lab assistant; and even, at a crucial moment, catches a skeletal butterfly. We visit each of these characters in turn, and each are given unique life, movement and articulation by the talented puppeteers. As the scientist’s dreams are realized and dashed throughout the story, we are left to reflect on the struggle of personal loss in a strange world where the industrial and the natural are thrust together.

The puppets themselves were simple, creative, and cartoonishly beautiful. Made by the company members themselves, these were a hodge-podge of the skeletal, the industrial, and the natural. My favourite, the igor-companion character, was operated by two people and moved through the spaces with the earnest energy and intensity of a russell terrier. It was made up of dirty sack, a chain-tail, metal cylinder head. The mother/wife, with a claw hand and umbrella body, included the mouth of one puppeteer in order to complete the image of a screaming, crying, laughing maniac. An audience favourite was definitely the cute, jealous, clown-like creatures made up of stuffed plastic bags with eyes. The creativity, imagination, versatility and simplicity of these puppets and others evoked audible gasps, moans, and laughs from the audience as Artichoke Heart brought these fantastical creatures to life.

A show completely without normative language, all sound effects—from grunts and cackles to whistles and ticks, were operated by the cast. This enhanced the feeling of otherworldliness which We Walk Among You evoked. And yet, the story was completely recognizable. All the characters were relatable—we loved them all, which made it even harder when they did horrific things. This is a show to make your heart burst—as scary as it is beautiful, its hard to describe the emotional strength of the at times tragically dark, at times lightly comedic, but ultimately stunning show. In the final moments of the show, as two unlikely heros leave the stage, they walk amoung us, asking us to reflect on the many similarities between this world—one of mourning mothers, avaricious clowns, broken fathers, and butterflies— and our own.