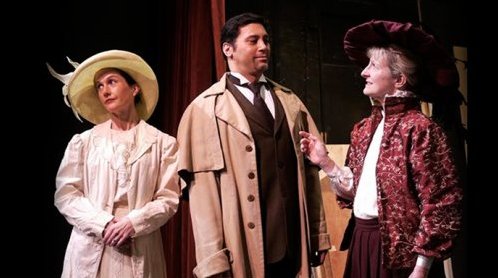 A Half-Hearted Smile for A Little Night Music

The summer night may smile three times, but it might have smiled a fourth time on The Arlington Friends of the Drama’s 429th production A Little Night Music, music and lyrics by Stephen Sondheim, book by Hugh Wheeler. The community theatre boasts some wonderful talent on the small stage, and mostly succeeds in orchestrating the complicated waltz of Sondheim’s score and Wheeler’s story under the careful direction of Joe Stallone and music direction of J. Parker Eldridge. They trip in the casting of essential characters, but manage to glide through the production on the coattails of David Warnock’s Fredrik and the surprising luster of Emily Earle’s Petra.

A Little Night Music might be the most complicated of Sondheim’s musical, and any explanation of the synopsis feels truncated and flighty; I shall try to summarize, but I apologize for any brevity or confusion. Opening in 1900 Sweden, a quintet of singers, our Greek chorus of sorts, narrate and orchestrate our opening to the major players—couples swirl and twist, alternating partners in an elaborate waltz (as a side note, Stallone is astute and notices the prevalence of Sondheim’s theme for 3/4 timing and the waltz throughout the score to illustrate the story’s motifs). The aging Madame Armfeldt (played with volumes of knowledge and experience by Kathleen Larson Day) instructs her granddaughter, Fredrika (played by the mature and accomplished young Sirena Abalian) that the summer night smiles three times: first on the young, second on the fools, and third on the old; Madame Armfeldt orders Fredrika to watch for these to occur.

Meanwhile, middle-aged Fredrik Egerman (expertly performed by David Warnock) is frustrated by his eighteen-year-old virginal, new wife, Anne Egerman (played with stiff youthfulness by Erin Anderson) and her defiance of his sexual pursuits, despite the worldly and crass advice by maidservant Petra (played by strong singer and actress Emily Earle). Fredrik’s son-from-another-marriage, Henrik Egerman (played by derpy and awkward Danny Kircher) returns from the seminary with his own demons, including emerging feelings for his new stepmother Anne. Complicating matters, the talented but aging actress Desiree Armfeldt (played by the aged and stately Margaret McCarty) is performing near Fredrik’s town, and Fredrik takes Anne to the theatre to see Desiree perform, setting into motion a return to an old affair between Fredrik and Desiree (it’s presumed that young Fredrika is Fredrik’s daughter from an earlier affair with Desiree).

Now, however, Desiree is attached to the married dragoon, Count Carl-Magnus (humorously played by Justin Budinoff with impressive pipes), who is easily fooled when he arrives to Desiree’s apartment during a liaison between Desiree and Fredrik. The Count returns to his wife, Countess Charlotte (played by the talented but underutilized Kathleen Dalton), who is the least clueless of the bunch. She organizes a meeting with young Anne and educates her in the deliciously sardonic “Every Day A Little Death.” The real action occurs when Desiree persuades Madame Armfeldt to host Anne, Fredrik, and Henrik for “A Weekend in the Country,” for which the uninvited Count and Countess crash. And during this weekend, everything changes for the couples—the Countess attempts to seduce Fredrik, Fredrik tries to rekindle his own flame with Desiree, Henrik woos Anne, and the Count vows to duel with Fredrik for his honor as Desiree’s lover. Is this heartache worth it?, wonders Madame Armfeldt to her young protégée Fredrika; the young child concludes that it “must be worth it” as the couples pair-off appropriately at the Finale.

The Arlington Friends of the Drama present a well-intentioned production of this difficult Sondheim musical. J. Parker Eldridge’s musical direction is crisp and well-orchestrated, making each song sway and turn with variety and purpose. Joe Stallone directs the piece at a clever pace and brings the relationships to the forefront. The production suffers from the miscasting of McCarty as Desiree; the aged actress lacks the youthful verve to captivate to the audience’s attention, despite excessive focus on the winning charms and beauty of the middle-aged actress. The plot depends on McCarty’s success in winning Fredrik and the Count’s hearts, as well as the audience’s. McCarty looked and felt defeated before she even began the summer night’s waltz. Thankfully, Warnock’s Fredrik exudes effortless fascination with the aged McCarty. His “Now” is a heartfelt, if humorous, plea for his wife and our attention; he succeeds where McCarty doesn’t.

Unfortunately, some of the other performers are not so compelling or interesting. Kircher’s Henrik struggles through “Later,” and fails to appeal to our sympathies, relying on a weak approach to the tormented character. Anderson’s Anne has a gorgeous voice but her acting lags behind her vocals, often playing a smaller character than the plot requires, minimizing her actions to almost doll-like proportions. Ironically, the Greek Chorus is mostly successful but struggles through some over-performances; their vocal prowess is exaggerated to almost comic effect with overpowering sopranos and buffoonish antics from the men.

Amidst some of this confusion, Day delivers a very understated performance as Madame Armfeldt, relying on her excellent speaking voice to accentuate the old woman’s wisdom. Her granddaughter Fredrika benefits from Abalian’s mature and energetic performance—it’s too bad that her skills were not more appreciated in this thankless youthful character. Earle exceeds expectations as Petra, creating a grounded character with minimal material and a wonderfully-performed “The Miller’s Son,” complete with humanity and humility. Budinoff displays his boastful and impressive vocals to good success as the conceited Count, but Dalton’s outstanding acting and stand-out performance as Countess Charlotte surpasses him. It’s surprising that Dalton is not Desiree, though this would leave the talented but older McCarty without a role; such is the way of community theatre with a dedicated repertory of regular actors.

Carol Benson Antos does a very economical and effortful job as Costume Designer for this period piece, mostly accurately and flatteringly adorning the cast in a multitude of costumes. Charlie Carr’s set design is impressive, especially considering the limited stage, for the myriad of locations and set changes; special accolades go to the seamless set changes performed by the cast to much success. Choreographer Dan Marshall makes these singers who move well look good, though the opening number feels rushed rather than effortless. The production elements mostly accentuate rather than detract, though the lighting design seems limited and blocky (this defect might be the product of the theatre’s limited resources). In sum, especially looking after the program, this production truly takes a village to put together with many volunteer designers and participants organizing and executing the production behind the scenes.

Arlington Friends of the Drama’s A Little Night Music is mostly a successful endeavor into Sondheim’s waltz of relationships, thanks to some standout performances from Warnock, Earle, and Dalton, and under Stallone’s considerate direction. I smiled leaving the theatre, thankful for the opportunity to enjoy this musical’s themes and plot with only mild distractions. With their next production, Avenue Q, on the horizon, I can’t help but hope that they cast some of the crucial leads to better success.