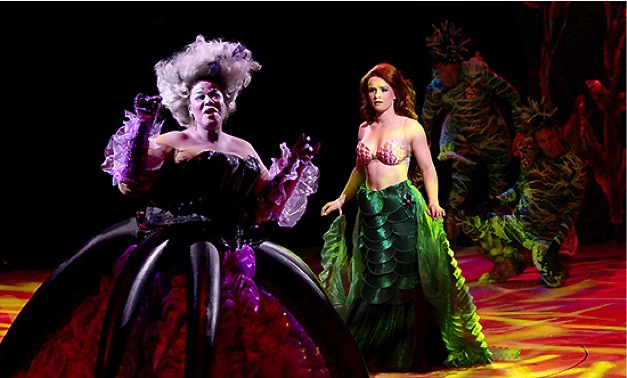 Bill Hanney’s North Shore Music Theatre is known in the Greater Boston area for bringing professional and Broadway-quality work to the North Shore of Boston during the lazy summer months and into the fall season. Moreover, they impress with their ability to stage full musical productions in the round, especially New England premieres. Disney’s The Little Mermaid should be no exception. Except parts of the production felt forced into a world well beyond their league because of a lackluster casting decision and a script that only really appeals to the four-year-old child in all of us. For adults, the musical works on nostalgia with a few powerful performances; however, for kids, the production is a magical adventure into live theatre. For that, I’m thankful for North Shore’s willingness to provide multi-generational professional theatre for all local theatregoers.

Disney’s The Little Mermaid offers a predictable storyline for anyone who watched the Disney classic on VHS. Ariel (Adrienne Eller), the youngest mermaid (get it? She’s little), yearns to adventure and see the world above the ocean floor, despite the protestations of her father, King Triton (Mark Campbell) and his fear of humans. From a distance, Ariel falls in love with the handsome and charming Prince Eric (played with notable skill by Bruce Landry), who must find a wife to appease his father, despite his own desires to continue exploring the world at sea. The diva Sea Witch Ursula (played with glorious camp by Kecia Lewis) entices Ariel to bargain her soul in return for a pair of legs to woo Prince Eric for 3 days; Ariel must relinquish her beautiful singing voice, with the condition that if she does not succeed in securing a kiss from him, then she must give her soul to Ursula forever. My contract law knowledge says that this is both a horrible deal and unconscionable, but that’s beside the point, except to indicate that perhaps Ariel needs a GBF to point her in the right direction.

Luckily, she has a few friends to offer much-needed advice and assistance. The guppy Flounder (played by the talented but underutilized Shawn Platzker) has a notably smaller role in the musical than in the movie, while the seagull Scuttle (played by the comedic Freddie Kimmel) and crab Sebastian (played with crowd-pleasing delight by J. Cameron Barnett) have expanded roles. Together, they help aid Ariel and offer some of the iconic music of Alan Menken and Howard Ashman, including “Under the Sea,” “Kiss the Girl,” and new songs “Positoovity” and “She’s in Love.” Ursula’s henchmen, Flotsam and Jetsam (played with wonderful physicality and devious voices by Jeremy Pasha and Paul Louis Lessard, respectively) attempt to foil the love-matching, but, in the end, true love prevails, though Ariel takes a more active role in her fortune and success in the stage adaptation.

The North Shore Music Theatre is an experience for the whole family. While the trek from Boston is cumbersome, my matinee attendance was a delightful treat (warning: leaving the parking lot can be a nightmare, so don’t plan to be anywhere else in record time after the performance). Also, the concessions stand before, during, and after the performance provide the full experience that mirrors the movies; while I would normally hate such commercialization of the theatrical experience, the North Shore Music Theatre makes it work, perhaps in its warm, friendly, and unpretentious atmosphere. While some of the individual production elements failed to deliver, the overall experience was well worth the attendance, especially if you have a young child or if you’re a young child at heart.

The biggest disappointment is in the casting of the young ingénue, Ariel, and Eller’s performance. Eller starts well enough with some well-performed solos, but she soon lacks the compelling and dynamic performance to match the Girl of Our Dreams. Ariel is an iconic Disney princess for many people; spunky, fiercely independent, with an unknowingly sexy demeanor, Ariel paved the way for many modern princesses as an individual with determination and goals (let’s ignore the misogyny in Hans Christian Andersen’s 1837 original short story and fable). Eller fails to be the angelic voice, the beautiful presence, and poignant role model for this musical. It felt like she was cast because she was the shortest of her sisters, many of whom offer some wonderful vocals and character work in their limited stage time.

The standout performance is Landry’s Prince Eric. At once effortlessly charming and with talent for days, Landry impresses by infusing his Prince Eric with all of the princely qualities, but also an additional depth to create the perfect man. It’s no wonder that Ariel is willing to give up everything for his man. One of his finest moments is in the quartet, “If Only,” with outstanding vocal performances and character moments by Eller, Landry, Campbell, and Barnett. Equally magnificent, and a tentacle above her movie character, is Lewis’s Ursula. The Sea Witch has never been as tempting or beguiling as when Lewis stretches her range with her own impressive pipes. Her acting, however, seals away our hearts and souls into admiration and worship. Lewis is a class-act of sexy physicality and menacing seduction; we fall under her spell and she takes our breath away with each sultry line.

The ensemble is engaging enough with the most interesting numbers being featured by the Mersisters, notably Sissy Bell’s Aquata and Grace Hardin’s Andrina. The other ensemble numbers seem too few and too fleeting, though “Under the Sea” is a masterpiece of color and activity. The addition of flying mechanisms is a clever and artful touch, thanks to Paul Rubin’s flying choreography. A.C. Ciulla’s choreography is fresh and bubbly, but lacks some of the impressive elocution seen in other North Shore Music Theatre productions. Director Michael Heitzman keeps the production moving at a wonderful pace, competing with our television-wired brains for constant stimuli and excellent use of technical elements to keep the action brisk. Most of Kurt Alger’s costume and wig design impresses with its color and flattering styles, especially Flotsam and Jetsam’s costumes and Prince Eric’s flattering outfits; however, Ariel’s wig seems to dominate her face and body, leaving her a mass of hair that borders on the comical. Finally, Bruce Barnes leads the actors and orchestra with impressive precision and wonderful execution as Music Director, creating a symphony of sounds under the sea.

While Landry and Lewis deliver impressively in their respective roles as Prince Eric and Ursula, ultimately the show rests on the eponymous leading lady, who needed to catch her breath under water. She seemed out of her league on the intimate North Shore Music Theatre stage, and her breathy and timid performance caused the production to stand on shaky legs from a theatrical standpoint. However, the sheer joy of the many children sitting breathlessly (and quietly!) in the audience showed that, despite the mediocre performances, the power of live theatre is the most exciting treasure. I hope that this exposure to The Little Mermaid and the professional performing arts by the North Shore Music Theatre’s cast and production teams inspire additional attendance and participation in this worthwhile art.