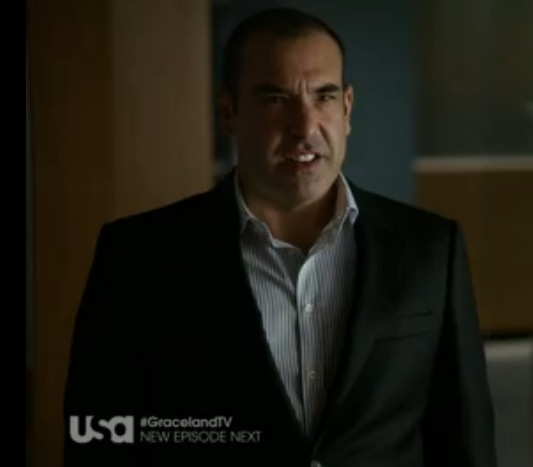 Suits continued season four in the much the same way it did season three: a half season long arc, resolved before the midseason finale, followed by Louis discovering the truth about Mike. It’s always a surprise though. The show digs itself into the deepest of holes, leaving us to wonder how it could possibly climb its way out. Then, they conveniently realise the hole was never that deep to begin with, and just walk themselves out. Yet, amidst all the deus ex machine, I’m still constantly thrilled by this show. It is not without it’s problems, but man if I didn’t see the Louis/Mike twist coming.

“This Is Rome” delivered strange metaphors for Harvey and powerful lines from Louis. Rick Hoffman was a force in this episode. He always does better as the villain, so I found myself upset all season that he was constantly vying for Harvey’s affections and Jessica’s approval. But in episode ten, he reminded me of the anti-hero I found myself cheering for more and more.

After resigning in shame over committing a felony, Louis tried desperately to find a job elsewhere. But the by-laws of his contract at Pearson Specter, the one that he created no less, meant that he couldn’t bring any clients from his previous employer to a potential new one. This proved to be fruitless, as the world of law is bloodier than Shark Week. After trying and failing to reunite with Sheila in Boston, Mike went to cheer Louis up by dropping off Louis’ office things. Here, Mike asks a question about a key, and Louis takes it as Mike making small talk by asking questions he already knows the answer to. That should have been our first clue, and it especially should have been Mike’s, he is the smart one in this relationship, you know, the relationship we totally have after meeting on Louis’ front steps. (Side note: I actually did meet Patrick Adams there, and am still confused as to how they made Louis’ house look like that since I know there’s actually a stair case where his living room claims to be. TV magic, I guess.) Anyway, Mike sets up a job for Louis with Rachel’s long lost dad (not literally long-lost, but seriously when was the last time we saw him?). Mean old Robert Zane won’t take him on without proving he has the gall to go up against Jessica. So, with the help of Katrina, Louis poaches a client, just not his client. Harvey quickly finds out that he Louis has stolen his newly signed client and gets Mike to find a way to bring them back. Mike, of course, does just that, because this wouldn’t be a Suits episode without the power being shifted ever other scene. Our second clue comes when Mike tells Louis they took back the company, and a dishevelled Louis asks Mike to leave, but not before Mike mentions the story of the key once more. Finally, Louis puts the pieces together, and waits in Harvey’s office. Donna finds him there, mad as hell, while he explains that if Mike graduated from Harvard Magna Cum Laude like he says he did, he would be in Order of the Coif and therefore have a key of his own. But he didn’t recognize the key and “Mike Ross doesn’t forget anything.” Donna breaks down and confesses, while Louis runs to find Jessica, and is baffled that she has kept this secret for so long, but wouldn’t try to cover up his mistake.  But Jessica knows, if Louis wanted her arrested she’d already be in handcuffs. So once again he asks for the thing he wants most, and now the thing she can’t deny him: Pearson Specter Litt. While you’re at is Louis, why not get your name a little higher? Litt Pearson Specter, or at the very least Pearson Litt Specter. I mean, aren’t you always supposed to ask for a little more so that what you really want isn’t so demanding?