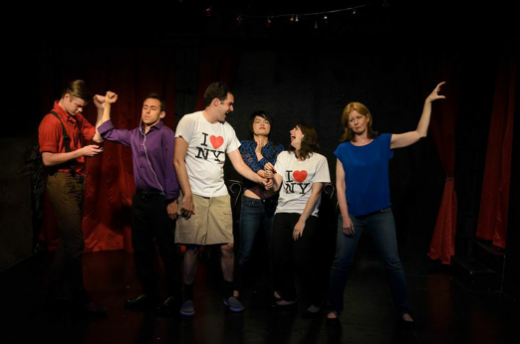 It was with great trepidation that I agreed to review Israela Margalit’s Get Me A Guy. The title reeks of the sort of female desperation that has formed the basis of countless television, play, and movie plots. After all, a “woman, without her man, is nothing.”* It may shock you to know that I do not subscribe to the notion that a woman’s life is defined by her ability to land the perfect guy and pop out a few kids. But, I decided to give Get Me A Guy a shot – after all, if anything could surprise me, it’s off off-Broadway in NYC. And, I was surprised! Sort of.

Get Me A Guy is a series of vignettes documenting the perils of dating, the struggle to build a relationship, the stupidity of some women in choosing a partner, the shallowness of some men in choosing a partner, and the genuine human desire to find someone to share life with. Admittedly, some of the one acts embraced the cultural stereotypes of women that make me cringe. For example, in one scene, a woman freaks out at her husband because he made the mistake of dancing with one of her good-looking friends at a party for three songs (!). In another scene, three women lament the many reasons that men have rejected them and each woman proclaims that she just wants a guy who will make her a “mama” – because the ultimate goal of any relationship is clearly a child. Another scene is dedicated entirely to one neurotic woman who plans out her child’s entire life and considers just how her hypothetical child will impact her life . . . while she is having sex. Skits like this are eye-roll inducing (and likely to make any man consider the mental stability of his significant other).

Despite my prior statements, Get Me A Guy is not entirely a social stereotype. In fact, one of the scenes was as beautiful, subtle, and poignant as any play that I have seen in New York this year. The premise was simple – an elderly gentleman meets an elderly woman who sits alone at a bus stop holding flowers. The pair exchange pleasantries and form a bond over missing loved ones and the desire for human connection. The piece is in stark contrast to the numerous garish and cliché scenes that precede it, and it demonstrates a great deal of artistic restraint and a strong conceptual understanding of human interaction that I welcomed. In fact, Margalit’s treatment of relationships between older men and women is far more interesting than her treatment of young romantics. In another sequence reminiscent of a Saturday Night Live sketch, an older couple lies in bed in the early hours of the morning and discusses their plans and life together. It’s not an earth shattering routine, but it’s humorous, well written and well acted.

Of this small cast, Elizabeth Galalis stands out as a strong comedic actress. Unlike many members of the cast, she also successfully develops multiple characters in the show. Wei Yi Lin and Brennan Lowery were generally fine in numerous scenes, but they really shine as the elderly strangers who form a bus stop friendship. The other lead, Paul Romano, suffers from an inability to rein his characters in. He tends to come across as loud and overwrought. The most lamentable decision with respect to casting this show was the choice to ask this ensemble to sing and dance, despite the fact that many of the cast members appear to struggle with singing and/or dancing.

I wanted to be pleasantly surprised when I entered Under St. Marks to see this show; unfortunately, Get Me A Guy spent more time confirming my initial suspicions than challenging my pre-conceived notions. Although the show includes a handful of inspired moments that made my trip worthwhile, Get Me A Guy and I will not be going out on a second date.

*Or is it a “woman, without her, man is nothing”? Silly commas.