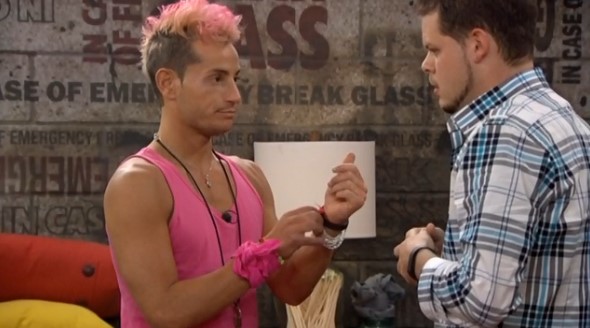 So much has happened in the last few weeks of Big Brother and we are gearing up for an intense final month.

This past week saw the demise of Zach, who was taken out by his own best buddy Frankie. We saw Frankie go from target number 1 to HOH. We saw the return of Nicole to the game. We saw the terrible social game that is Donny. We saw Victoria emerge from the hole she’s been hiding in all summer…don’t worry though, she only came out to cut up a pink hat.

I’ve said before that I was reluctant to call this season the best yet, and I did eventually come around to the belief that it really is the best. I’m still backing that decision. I am, however, so nervous about the final month. The way I see it there are three deserving players left in this game, but really only two who have a shot at winning.

The first, who is likely leaving this week or next, would be Nicole. In a house filled with women who fear men and have no backbone whatsoever (or woman who were voted out too early to prove otherwise), it’s nice to see one female try to play this game. In any other season, Nicole would be overshadowed by the more strategic, more powerful females in the game. This season though she’s been given the opportunity to shine a bit. For a while there, she was the only real threat to the Detonators. Nicole was the brains behind the first attempt at evicting Frankie, which unfortunately went awry when Christine won the Veto. She was also instrumental in attempting to create another alliance with one of the most powerful players in the game: Derrick (unfortunately for Nicole he was playing her all along). I was pretty shocked when the Double-Eviction episode came around and Hayden was sent packing over Nicole. He may have been viewed as a larger physical threat, but Nicole proved she had the brains in that showmance. Needless to say, I was routing for Nicole to win the jury competition and reenter the game. Sadly, she and Donny are the next targets to go. I do think (and hope!) the Detonators will keep Nicole this week over Donny. There’s something trustworthy about her as a player, and should any of the Detonators need an extra vote, she’s willing to play ball. Then again, Donny could win Veto or the house could flip the nominations for the 100th time this season. Only time will tell. I do hope Nicole has the satisfaction of taking out one of the major powerhouses this season before her time is up.

The next contender for the win is Frankie. From day one Frankie emerged as a power player in this game. EVERYBODY likes him. He somewhat manages to put people on the block and still be best friends with them. For the first few weeks, I was full on Team Frankie. Nobody was playing a better social game. Then, I started to think there was a better player in Derrick. Frankie changed my mind again when he single handedly won the Battle of the Block after Caleb refused to play beside him. He then quickly exposed his secret of being Ariana Grande’s brother, which at the time seemed silly, but somehow helped him to regain the trust of the Detonators. Frankie is a playing an in-your-face game and that’s been working for him. But then he went and made a critical error when he orchestrated the eviction of Zach. While he and Zach sparred a bit recently, I truly don’t think Zach would have ever turned on Frankie. So now Frankie’s left in the game with Caleb as his closest ally. Caleb is maybe a stronger competitor than Zach, so that could help Frankie, but I think Caleb might be more likely to send Frankie home than Zach would have been.

While Frankie’s power in this house is inconsistent, Derrick’s never falters. This guy is a genius. He plays a quiet game but ultimately he’s responsible for most of the evictions. He even helped convince Frankie to vote out his biggest ally in the house. Derrick’s relationship with Victoria is also key to his game. He has a close ally in Cody and three other allies in Frankie, Caleb, and Christine. At this point Nicole and Donny are really they only people guaranteed to go after Derrick, and one of them is leaving this week! If Derrick were really smart, he’d bring Victoria all the way to the end but he should win in a landslide against most of the houseguests. Derrick’s played a great social game as he befriends the entire house, but he’s also played a really strategic game where he evicts everyone without getting any blood on his hands.

The winner of Big Brother will likely be Nicole, Derrick, or Frankie. Whichever one of those three make it to the final will hands-down win the grand prize. Since Nicole is public enemy number 2 (or maybe 1!), I suspect a showdown between the boys. The real question is which one will strike first. Derrick seems to be gunning for Christine next, and who knows what Frankie will do. This is one of the first times in a while that two powerhouses haven’t taken the opportunity to back door the other. Needless to say, I’m on the edge of my seat waiting to see what will happen next.