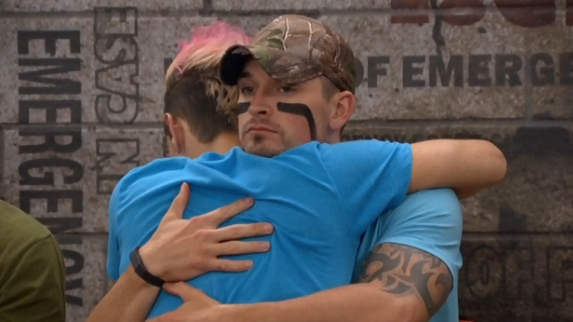 A Moment in Reality

This is why I love reality TV. Most people watch it for the schadenfreude or escapism, but I tune in because if the greatest writer in the world had written tonight’s episode of Big Brother, it wouldn’t have been as brilliant as this was. Tonight’s Battle of the Block competition- including its lead up and immediate aftermath- has to be the greatest scene in series history, or at least close to it. We saw our hero Frankie live long enough to see himself become a villain, then, alone and friendless as villains are wont to be, he crawled to Rudy-like triumph against all odds and expectations to once again feel the glare of the artificial BB lights on his skin and the burn of a hateful house filled with those who once loved him.

Also, Cody held hands with Victoria; what was that about?!

Let’s break it down, shall we? In order to force myself to keep it short, I’ll use bullet points (I make no promises about the length of each bullet point).

First, a little character analysis as backstory (in case you are a crazy person who isn’t watching this Incredible season):

To set the stage, the episode begins as the credits roll on the Teen Choice Awards where Ariana Grande picked up two of the year’s top prizes:

The Competition, a reality TV scene so riveting, heartbreaking, triumphant, moving and foreboding that its like will probably never be captured:

It’s now impossible to root for all of my favourites at once but, my god, what an incredible episode of television.