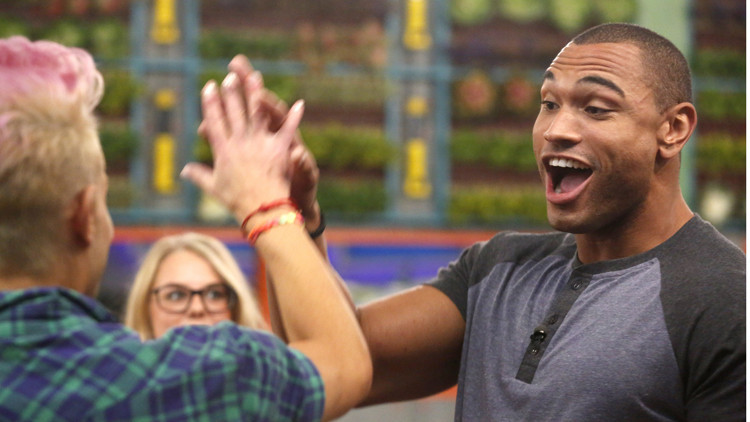 If I were a houseguest on Big Brother, I would treat the entire first week the same way I treat the series premiere of a TV show: sit back, enjoy, reserve judgment until you get one more week, and then commit to it or drop it.

Sadly, I’m not a houseguest so instead I’m left watching as Devin creates 3.5 alliances in less than a week. First, the Crazy Eights are formed as he enters the house with seven other strangers and they’re smart enough to realize that eight more are likely on their way (but dumb enough not to actually stick together). A mere few minutes later, he creates a secret sub-alliance with Donny and they call themselves Double D (probably one of his more strategic, and respectable, moves so far). Then, he jumps in on an all-male alliance dubbed the Bomb Squad with Frankie, Caleb, Derrick, Zach, and Cody. There’s lots of talk about how women are emotional and therefore suck at Big Brother (I’m loosely paraphrasing*), so the guys decide to stick with the guys….until Devin stays up way past his bedtime and decides they need two girls in on the alliance. In one of the most idiotic moves so early in any Big Brother season, Devin spills the beans on the Bomb Squad alliance and invites Christine and Amber to join the alliance without actually conferring with any members of said alliance. What follows is a lot of jaw dropping from myself, the remaining Bomb Squad members, and likely all of America.

This guy is dumb.

Aside from Devin’s playing-too-hard-too-soon game and the fairly sexist comments from the Bomb Squad members, the only other interesting aspect of the premiere week’s social game was Frankie’s nomination of Victoria. These two hit it off pretty early on but Frankie turned on her for his newfound alliance. This move particularly bothered me for two reasons: 1) don’t nominate someone who will never nominate you on the FIRST week of the game, and 2) don’t spend an inordinate amount of time telling her how painful it was to nominate her. We are on week one here! If it’s that painful, then nominate someone else.

Social aspects aside, this week also saw the seasons twists begin to play out a bit more. With four nominations and two HOHs, I was curious to see how the Battle of the Block would play out. It seems as though the winning team is safe from elimination this week, meaning even if the veto is used, they are safe. This hasn’t been 100% confirmed, but if it’s true it definitely will affect the strategy of the game. I could see a lot more backdooring happening this season. It would not make sense to nominate two strong competitors since they would have a good chance of saving themselves during the Battle of the Block. I both love and hate this new twist because it puts a good deal of value on the competitions, which I love, but may make people change their strategy in favor of the typical “jocks” (which I hate).

The second twist of the season is Team America. It basically sounds like America gets to tell three people what to do. So, it’s essentially the Saboteur but maybe less sabotage and more strategy? We shall soon find out. The first team member was revealed to the viewers as Joey! I’m fairly pumped about this since she was my number one pick and hopefully will continue getting some love by the viewers.

It’s already incredibly fun watching these fools try to play so soon. My anticipation for the season continues to build, and my opinions on the houseguests continue to change. Here are my newest rankings based on week 1:

15) Paola – Just as annoying as I anticipated.

12) Victoria- Not as mean as I expected. She cries a lot and isn’t great at competitions.

11) Amber- She’s now part of the Bomb Squad, through no work of her own doing. She still seems cool though.

9) Caleb- I’m on the fence here. His emotions were kind of adorable when he genuinely felt bad about his nominations. I do like that he’s on board with teaming with Frankie, especially given Caleb comes across as the last person to team with a flamboyant youtuber. I also think his alliance could have been successful, but only if he kept it at 4 people.

8) Zach- Not as funny as I wanted/expected, so he has dropped down a bit. He also seemed like an afterthought to the Bomb Squad. Hopefully his humor will boost him up again soon.

7) Frankie- Also still on the fence about Frankie, but he had lots of air time and didn’t annoy me too much. He could become a good strategist if he rethinks his alliance.

5) Derrick- I like that he doesn’t want to be in the Bomb Squad, but is just going with it for now. He feels like someone who will slide his way to the top, but secretly strategize the entire time.

4) Brittany- She wins major points for not only winning the Battle of the Block, but being so encouraging of her teammate.

3) Joey – I still love her, even if she isn’t doing anything yet.

1) Nicole- How did one of my least favorite’s pre-show become my favorite? Diary room. If you do a good diary room, you win all my love.

*Side note: I really hope the ladies are just playing a wise game by NOT making a million alliances right away. I do think it’s smart to lay low week one so my fingers are crossed hoping we see some quick ass female strategy soon. I’m also crossing my fingers that Christine and Nicole rule this season. Their friendship is adorable.