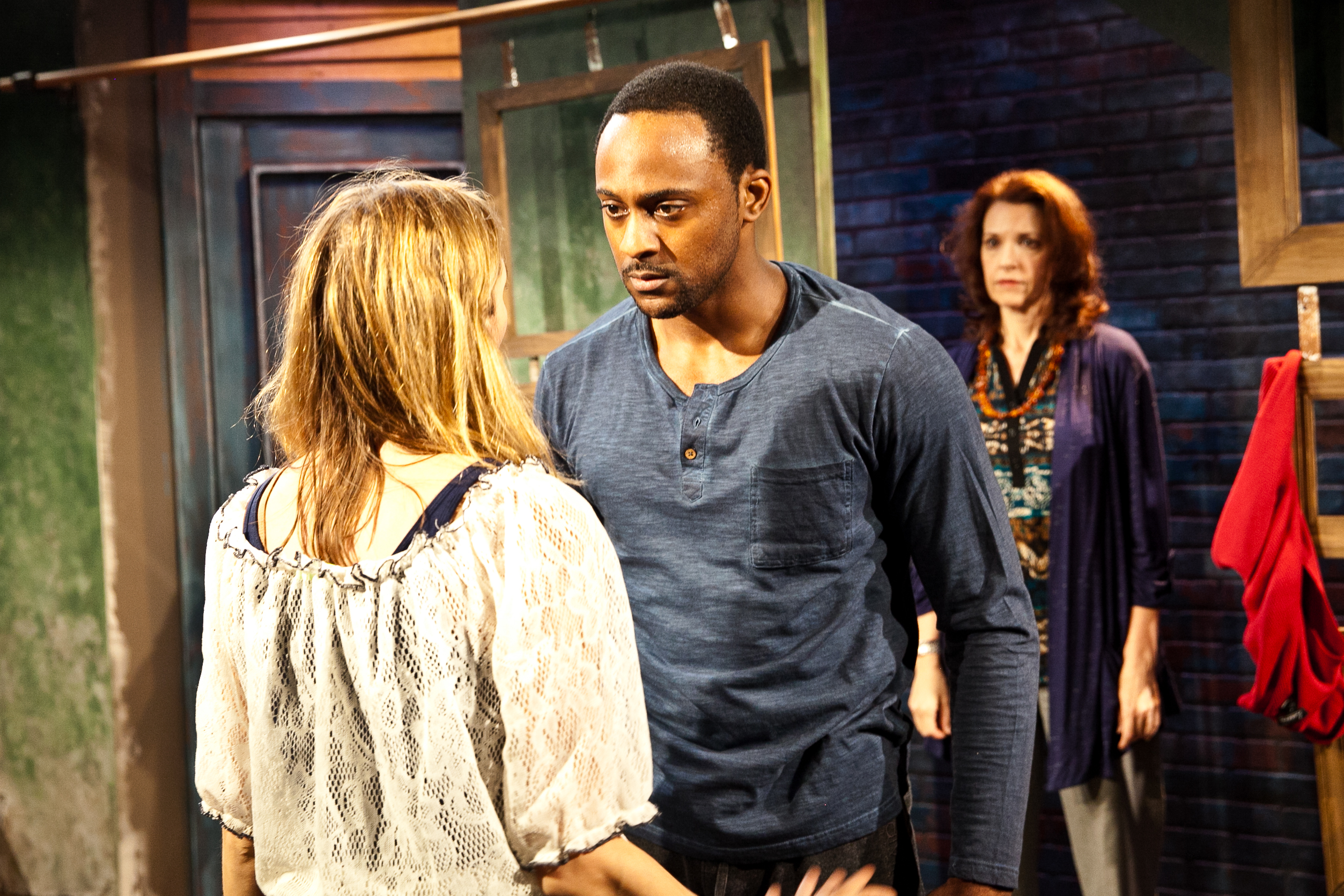 The Taste of It: Need a Bigger Bite

Relationships are tough. Relationships between self-involved, overly-dramatic young people who are on the brink of presumably life-changing success are downright treacherous. That does not mean they are not worth plunging into heart first. Most fleeting relationships are soon forgotten, minor mountains to be conquered and left behind, but there are some romances that leave an indelible impression. They become tales worth telling or, at the very least, memories worth dredging up. Such is the romance at the center of John Adams’ newest play The Taste of It being performed at Theatre 54 in midtown. Adam’s play hits some poignant notes of realism but also feels ill-paced and, at times, incomplete.

Set in 1970’s Boston, The Taste of It is the story of Ross, a black, performance grad student, and Sheila a white, directing student who meet when Sheila tries to recruit Ross to perform in her re-imagined thesis production of The Emperor Jones (albeit a production with none of the original text in an effort to appease Ross who views Eugene O’Neill’s play as a racist tale). While The Emperor Jones is a dismal failure after Ross backs out, it is also the catalyst for a burgeoning and fast-paced relationship between the pair. “Old Sheila” recounts the sensual dance lessons that Ross gave her, the job opportunities that came to Ross while Sheila struggled to gain her footing in the theatrical community, and their imploding relationship as Ross gained more attention from women and refused to accept help with his work.

The precise time frame for the relationship remains unclear, but the relationship appears rather whirlwind. Yet, Old Sheila recounts her tryst with Ross as if it was the most exciting, self-defining experience of her young life. Her recount is also laced with a bit of a regret, although it is unclear if she regrets the demise of the relationship, the pursuit of it, or the hold that it has on her throughout her adult life. Unfortunately, while Adams’ play contains sparks of passion, the lack of story-telling finesse causes the relationship between Ross and Sheila to feel empty and disingenuous. For example, Ross and Sheila appear to leap from first date to live-in lovers with little or no romantic development. While this leap may simply be Old Sheila’s selective memory of their relationship, it is a rocky bed upon which to build the audience’s expectations for their relationship. Without the development of Ross and Sheila’s “couplehood,” it is very difficult to care about the eventual demise of their love. Not even the beautifully choreographed dance scene between Sheila and Ross (reminiscent of “Dirty Dancing”) is sufficient to make one believe in their relationship.

Moreover, Ross and Sheila are such frustrating, childish, and self-involved characters that it is difficult to care about their relationship together. Therefore, despite the fact that the Ross/Sheila love story serves as the focal point of the play, the most interesting relationship in the script is that of Old Sheila and her younger self. Sheila matured considerably as she aged, and, although she remembers her time with Ross fondly, she also comes across as strikingly melancholy during her recount of the relationship – perhaps lamenting who she was during her grad student days or the choices that she made or the relationship that she lost. It is complex and unclear (i.e. fascinating).

Much like the show, the small cast of The Taste of It is quite successful in some scenes and less successful in others. During sequences when Landon G. Woodson dances across the stage and throughout the serious moments in the script, Woodson is a commanding and powerful presence on stage. Unfortunately, this successful presentation often gives way to uncomfortable moments when Woodson appears more like a caricature than a real person.  Briana Pozner is at her best when Sheila is in a playful or particularly self-reflective mood, but she struggles to portray certain emotions like anger or sadness with any sense of rawness or believability. Only Jean Tafler, who portrays Old Sheila, managed to develop a consistent and solid character. Tafler’s Old Sheila has such a vitality and cheekiness that I consistently missed her narration when she moved offstage.

The set, while simple, was quite effective. A dozen or so empty picture frames doubled as doors, and the couple slowly added photos, drawings and other mementos of their shared life to those frames during the play. The staging utilized the entire performance space, which was a welcome creative choice that worked well. In addition to the set and staging, technical highlights of the show included the choreography by Maxine Montilus, and Adam H. Greene’s lighting design, which was one of the most effective lighting designs that I have seen in a small performance space. From creating an intimate shower scene, to a low light dance sequence, to a spotlight phone call, Greene focused the audience’s attention in the space very well.

True to his title, the playwright John Adams gives audiences a taste of Ross and Sheila’s romance in The Taste of It but, despite the everlasting impression that Ross apparently left on Sheila, this taste does not quite intrigue the palate of imagination.