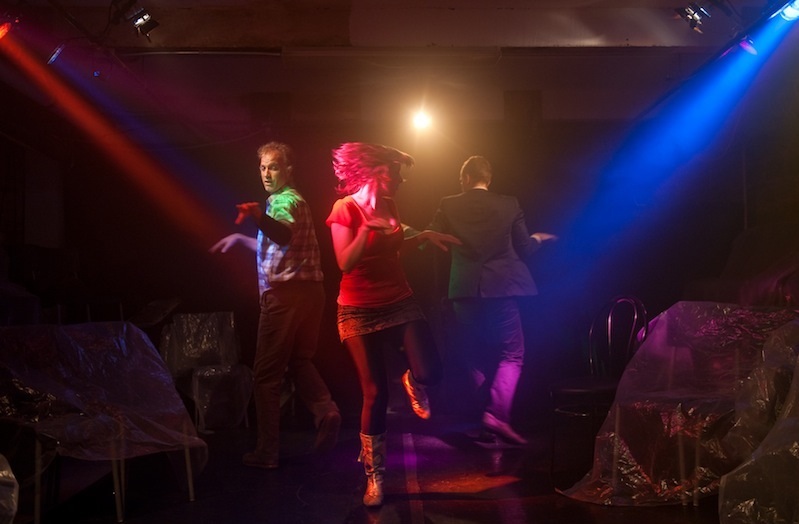 Pop-Up Love Party: A Love Worth Working On

“What a strange thing it is, that whereas other gods have poems and hymns made in their honour, the great and glorious god, Love, has no such encomiast among all the poets who are so many… we who are assembled cannot do better than honour the god Love”

These are the words of Phaedrus, in Plato’s symposium. In the story, members of a feast—the socialite, the lawyer, the doctor, the comedian, the poet, and the philosopher— were charged to make a toast in the name of Love. Now, much has changed since this ancient Greek challenge. Today, we are not short of poems, hymns, movies, plays, and songs about love. We are culturally oversaturated with concepts of happily every after, love everlasting, love at first sight… the list goes on. And thus, our eyes easily drift into a roll when someone says the word ‘love’. And so did mine, as I walked trepidatiously into Lion and Bright Monday night, for the opening of Zuppa Theatre’s Pop-Up Love Party. But, be still my cynical heart. For with beer and food, director Alex McLean gave us a modern day symposium. He, and the Zuppa team, asked us to leave our jaded hearts at the door; to wonder about good love, bad love, balanced love, origins of love, and embarrassing love; and to toast, again and again, to love. And, well, I loved it.

The show began with an explanation of Plato’s symposium, and the kind of love we’ll be talking about: Eros, or sexual love. Each speaker presented their own understanding of love: The socialite imagined a world where we all love each other; the lawyer put good and bad love on trial; the doctor looked for the balance of healthy love; the comedian imagined a love origin-story involving aliens with lasers; the poet sang a song about love; and the philosopher asked us to see love reflected in the small, huge, comedic and tragic moments of everyday life. The show ended with the metaphorical entrance of a drunken soldier and some talk of embarrassing things people have done for love. Susan LeBlanc started the evening off with a moving discussion of her mothers, her loves, and a plea for us all to love each other. Her performative timing and delivery, much enhanced by the musical echoes of Stewart Legree, was both funny and heartwarming. Many people at my table were tearing up by the end of her affective monologue. Stewart Legree’s performance was no less honest and captivating. A naturally charismatic performer, you can’t help but like Legree. The integral tone of his monologue as the Lawyer, as well as some fun audience participation, was greatly enjoyable. Ben Stone, though different in energy, being more frantic as the comedian (perhaps too frantic, when he knocked over one man’s beer), was an excellent storyteller. What impressed me most is that they discussed love with great feeling and emotion without descending into triteness or platitudes, with the exception perhaps of the poet’s song (performed by Legree), which, while certainly enjoyable, did border on the cliché.

The one down side of the show was that it was long. A full two hours of uninterrupted talking was a bit much. We were mentally finished talking about love at about speech three (of six!). And while people were encouraged to get up for a beer anytime, this was difficult in practice, as the actors used the entirety of Lion and Bright. Their use of the space should be commended, yet the constant pacing along the bar’s walkways was another flaw the show. LeBlanc, who chose the place of her soapbox with care, was a welcome contrast to her co-actors who ran, paced, and moved around the space ad nauseam. This unstructured movement was not helped by the monologues themselves being at times unstructured, going on too long, with actors often forgetting their lines.

It’s important, at this point, not to forget that this is a work in progress. This particular performance was not only the first time that it was performed in front of an audience, and in the space, but was also the first time it was performed off-book. And so, while it was a brilliant work in progress, there is still some work to do in distilling and blocking what has the makings of a beautiful, engaging, and rich conversation about love. That said, it’s not every theatre group that could maintain the attention of the room for 2 hours straight, and still get people participating to the end. They should be applauded for their energy, commitment, and, well, their love.

And that’s my take away of Pop-Up Love Party. As Stone as the philosopher described, love is a conductor. Love is what happens between us. And in the case of Zuppa’s WIP performance, it was amazing to watch the love between the performers and their audience. Because they’re right: that energy between us—when we sit together in a theatre (or a bar, lobby, or hotel basement) and watch someone share something—what else could it be but love?