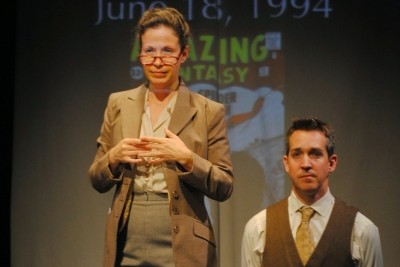 Nothing epitomizes the “geek” culture like comic books. In recent years, Hollywood has revitalized the big screen comic book hero to capitalize on the rise of “geek chic” in America. Don’t believe me? During the last ten years, four of the highest grossing domestic movies have been based on comic books. I have a confession: I missed most of those movies. Moreover, my exposure to comic books has been remarkably limited. My college roommate had some X-Men comics that I casually skimmed through once, and Watchmen was required reading in my science fiction breeze course in college. Needless to say, I was out of my element when visiting The Brick Theatre’s Comic Book Theatre Festival in Williamsburg, Brooklyn to see Crystal Skillman and Fred Van Lente’s new play King Kirby.

There is a golden standard by which I judge all biopic plays and movies: if I have a profound desire to pick up a biography or undertake independent research on a person after seeing a show, the show was worth my time and attention. For your information, I just spent the last two hours Google searching “Jack Kirby.” Prior to seeing King Kirby, I had never heard of Jack Kirby. Comic book fans likely have, as he was one of the most prolific and instrumental comic book artists of the 20th century. Responsible for turning imaginative visions into pencil etchings of Captain America, Spider-man, Thor, The Fantastic Four, and other beloved Timely Comics (now Marvel Comics) and National Comics (now DC Comics) characters, Kirby is the artist behind some of the world’s most beloved superheroes.

King Kirby introduces Jack Kirby’s formative years during the Great Depression, when his father’s factory position inspired him to dream big – space invaders big. After attaining an art degree and sketching Popeye cartoons briefly, Kirby found his way into the fast and loose business of comic books, where artists were paid by the page for their work (and intellectual property was apparently little more than a buzzword). The year was 1941 and Kirby struck it big by developing a hero to tackle the greatest villain of our time: Adolf Hitler. His creation, Captain America, won the hearts of America’s youth, as did Kirby’s other creations like Boy Commandos.

King Kirby follows Jack Kirby to war and back, introduces his relationship with wife Roz, explores the animosity between rival comic book companies, and finally focuses on the dynamic artistic relationship between Jack Kirby and Stan Lee, as well as the subsequent legal battles and epic falling out between Lee and Kirby.  The play ends as Kirby grapples to maintain some semblance of control over his artistic work and ownership of the characters that he helped to create.* Every cartoon story needs a villain, and Stan Lee (along with his family members who controlled Marvel Comics) is as close as they come in this biographical tale. Who knew that the comic book industry was so incredibly fascinating?

Skillman and Van Lente have identified a superb subject matter for a play, but their treatment of Kirby’s life feels almost cursory at times. The play covers a time span of over forty years, and does a nice job of establishing the time period, however, certain occurrences in Jack’s life are tossed in haphazardly. For example, when Kirby must confront the censorship movement of the 1950s (explored here through the testimony of Dr. Fredric Wertham** in front of the Senate Subcommittee), what is otherwise a remarkable action of self-censorship taken by comic book publishers is glossed over and used merely as a tool to explain why Kirby ended up working with Stan Lee. The explanation is not particularly well delivered, and the entire scene feels more like a means to an end – in this case, the launch of the Stan Lee and Jack Kirby comic book years. Also, there are admittedly quite a few “Easter eggs” for comic book fans tucked away in this play, such as Stan Lee’s random use of the word “Excelsior!” which drew chuckles from the knowledgeable audience but which merely struck me as odd.***

This criticism is not to suggest that the play is not good. It is. It is very good. Director John Hurley skillfully stages scene transitions to move the show along at a brisk pace, with the aid of Olivia Harris’ creative lighting design and Holly Rihn’s period-appropriate costumes. Steven Rattazzi is perfectly cast as the naive businessman but streetwise artist Jack Kirby, and Rattazzi successfully captures and conveys Kirby’s passion for his art.  The rest of the cast is equally as strong, with Amy Lee Pearsall portraying Jack’s wife Roz, Nat Cassidy delivering an inspired impression of young go-getter Stan Lee, and Joseph Mathers aptly handling the job of bringing Kirby’s business partner and friend, Joe Simon, to life onstage. Timothy McCown Reynolds rounds out the cast in a number of character roles, some of which are successful (like the German-born Dr. Wertham) and others that would benefit from a little restraint (Reynolds has a penchant for yelling, which becomes tedious).

While I may not be a comic book aficionado, the sharp writing and staging of King Kirby quickly won me over, and suffice it to say that I will be keeping a close eye on the court case involving Kirby’s heirs. Given his intriguing backstory, perhaps Jack Kirby will one day get the same Hollywood treatment that his many superhero creations have gotten on the big screen. Anyone know a movie producer? I have a script that I would like to pitch.

The Comic Book Theatre Festival runs through June 29 at The Brick in Williamsburg, Brooklyn, and you can catch King Kirby on June 25, June 28, and June 29.

*I had to sit on my hands and bite my tongue as he flung his rights away onstage without so much as discussing the matter with his wife, let alone an attorney.

** Dr. Wertham wrote the book Seduction of the Innocent, which suggested that the depictions of sex and violence in comic books encouraged children to engage in inappropriate behavior as depicted in the comics.

*** Apparently Stan Lee has adopted this word as his personal catch phrase. I suppose that there are worse catch phrases than “ever upward.”