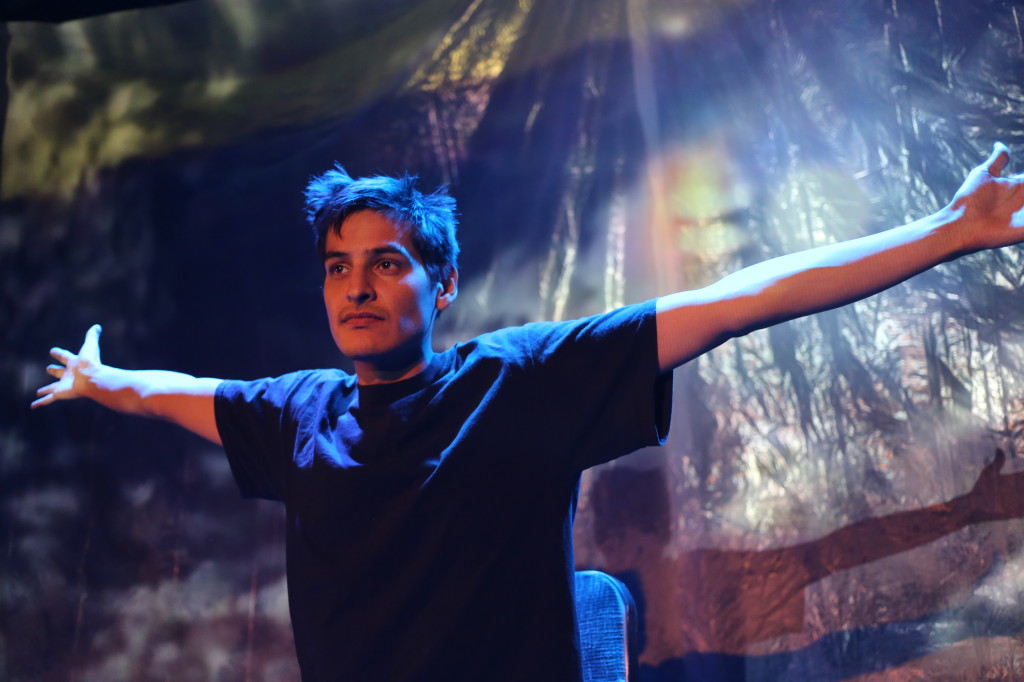 He Huffs and He Puffs: Huff at Magnetic North

You walk into the theatre. Plastic covers the walls on the stage. At first you don’t notice, but after a while you start see something projected there.  A ribcage?  “This isn’t your regular programing,” actor Cliff Cardinal tells us, as he walks on stage with a plastic bag duct taped over his head. “It takes 7 minutes to die like this,” he says. With this opening, the audience is brought into the frightening and evocative world of three brothers growing up on a native reserve. With this story of sexual abuse, drug abuse, and poverty, Huff has dual success: first, as beautifully performed and well executed solo show, and second, as an important and politically engaged story of Canada’s First Nations people, and the world that previous generations and political powers have created for them.

Huff tells the story of a teenaged boy as he they navigates his father, family history, school, drugs, and personal loss. Through the versatile and physically complex acting of Cardinal—who presents us with no less than six characters, two animals, and one Trickster— we see the environment of abuse through the eyes of Michael and his two bothers. As with any good solo show, Cardinal is a joy to watch; his youth, energy and vitality help create a charismatic, albeit complicated character. We like Michael because he talks to us (swears with us, makes us promise). He implicates the audience the stage action, revealing how, as with any First Nation’s issue, the implications of his issues extend well beyond that one community. As someone mentioned in the talk back (a very good addition to this moving show), we were witnesses to a certain kind of trauma. By implicating the audience through the writing, directing and the choices of Karin Randoja, Huff makes an important political statement about who is involved in the trauma and layers of abuse on the Native reserves: government, native communities, and white Canadians.

The set is simple and yet well used—not a prop is wasted as full and empty beer bottles step in to be a baby with FAS, or children in the reserve school. Projections on the plastic walls create a distorted and evocative back drop to this complex world. The script is strong, funny and heart wrenching, and Randoja animates it with delicacy, creativity and good taste. Never are Native Canadians turned into victims, or subject to spectacle, as is so often the case in the history of Native performance. This difficult story is well told, and subjects such as rape and alcohol and drug abuse are addressed with elegance.

The end of the show brings us back to the beginning, as Michael puts a plastic bag over his head again. I was reminded of the ribcage projection from the beginning, finding myself in the belly of the beast, maybe somewhere near the lungs. Breathing in its many forms—dying, chocking, huffing, smoking—is a key theme in the story. And so too do we hold our breaths as this painful story comes to a close. And we fall in love with these characters, as they navigate their impossible situation. We want so hard for them to win, for them to breath easy. For them to live.

This is the success of all good theatre: it brings you into a world where you are left breathless. And that’s when you realize that with the plastic backdrop, you’ve been in the plastic bag all along. Like Michael, Canadians are slowly choking a major part of our population. In the final moments of the show Michael asks us to breathe, accompanied with stunning stage effect. Here we are asked metaphorically to remove the plastic bag from our heads. Only then will we see and breathe clearly. We are all treaty people, as one man in the talk-back reminded us. And it’s high time we learn what that means.