Guerilla Opera Is One Brave Rooster 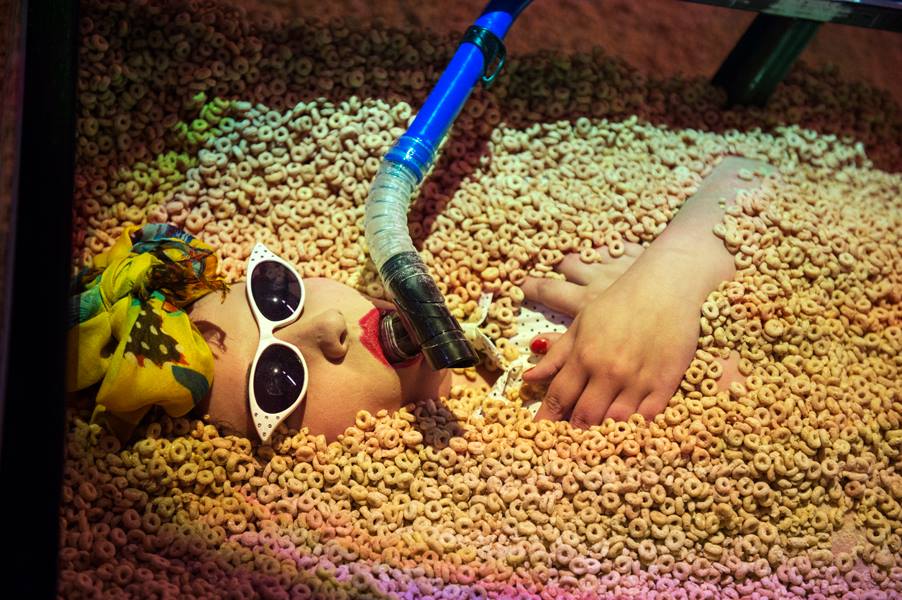 Gallo is intellectual theatre of the highest order, but, unlike most other theatre of which this is true, it refuses to be up tight, and removes just about every ounce of pretention from the air around it. After all, it’s hard to be pretentious while barefoot, on a beach towel, on a bench, in front of a beach of Cheerios. Yes, Cheerios, the beloved breakfast cereal which serves as both sand and projection screen during Ueno’s 90 minute opera about memory, landscapes, and the shifting tides of what it means to exist and be in this world.

Logistically, there are two characters. The first, a Rooster named Farinelli who sings of the very core of the show, waxing poetic over the question of “Which came first, the chicken or the egg?” His existential aria embodies the essence of *being* in the world and serves as a dramatic highpoint after an hour or so of absurdist “happenings” which conjure the likeness of Pinter and Beckett if the two got together to drink and write, and watch what unfolded.

Douglas Dodson plays the Rooster and shows off a brilliantly textured counter-tenor voice. I’ll admit that Dodson’s opening off-stage aria about the Lisbon earthquake of 1750 never really took hold, setting me slightly uneasy for a start, but as the opera moves on, he is able to flex some wonderful vocal muscle and impresses with his later scenes.

The second character is a shopper; a trope of modern consumption and commercialism played magnificently by Aliana de la Guardia, Guerilla Opera’s General Manager. De la Guardia is a tour-de-force and never fails to impress with her presence, power, and precision, which is saying something considering the fact that *she* is the reason the house didn’t open until 5 minutes prior to curtain.

While guests would normally be entering the theater 20-30 minutes before the performance, the crew was busy burying de la Guardia inside a casket full of Cheerios. There she stayed for the first 40 minutes of the opera with no light and breathing only through a snorkel. Half way through the opera, several musicians come down from their perch and lift the casket, allowing de la Guardia to burst out of it, trailed by a cascade of Cheerios. Through all this, she never misses a beat or a note, hitting every button and pause gracefully.

Musically, you can’t find a better ensemble than Guerilla Opera. Their musicianship is top-notch and their commitment to their place in the Boston classical music scene is impressive. Like most Guerilla Opera productions, the ensemble leaves you breathless, wondering how they accomplished what seems like an impossible marathon of a score so seamlessly and effortlessly.

Interestingly, while this remains one of my favorite Guerilla Opera (GO) productions, the score is rather light on the vocalists (light, not meaning easy, which is certainly is not). Almost every other piece I have seen at GO is nearly entirely sung-through, while Ueno’s score opens up space for voice-over, soundscape design, extended instrumental solos/duets, and the crunching of Cheerios over otherwise silent moments. The interplay between these elements is delicate, but calculated, adding a surprising amount of depth as voice, music, and digital atmosphere commingled into a sort of temporal and intangible creation.

As if all of this weren’t sufficient, Guerilla Opera is brave enough to ask the audience to participate in the performance. De la Guardia circles the audience, handing them a string and unravelling it, eventually creating an interconnected network, asking us all to work together to further let out the line as she attaches it to a kite and makes it dance in the air, poignantly illuminating the interconnectedness of beings and natural forces.

I was later asked to leave my seat and get in line, a funeral procession for the Rooster who was reclaimed by the landscape. As each audience member passed the makeshift casket, they poured a small amount of the Cheerios over the deceased and kneeled down on the cereal-beach, eventually lying down. Here, from the ground is where I watched the end of the opera, ultimately becoming a part of it; Ueno’s last commentary on landscape and relationships; that of the theatre, and the relationship between the audience member and the performance.

Gallo is brave, bold and daring. Gallo is smart, intellectual and insightful. Gallo is eloquent, lyrical and existential. Gallo *is*… whatever that means.

The 2013 My Theatre Award Nominees: Boston
On Stage in TO: Sex & Ambiguity
Stones in His Pockets