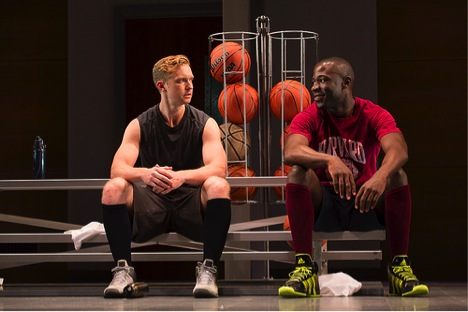 A few years ago, I heard a knock on my door and wavered about answering it. It was almost eight in the morning, and I should have been out the door and on my way to work already. I had stopped only to sweep my incredibly dusty hallway before hurrying to catch the 66 bus. Finally, I opened the door, and faced my building’s maintenance guy, Matt. “Hello, I just wanted to let tenants know that…” he trailed off. He took one look at me (wearing slacks, a button-down, and an H&M vest, I might add), one look at the broom in my hand, and cut himself off. “Oh, ah, sorry, I thought you were…I can wait until…I can come back later…” It took me a few seconds to realize what had happened. “Yes, Matt…can I help you?” Only then did his eyes widen in recognition. “OH!…Hi.”

I’ve always been amused at this anecdote of being mistaken for the maid in my own apartment, and equally amused at how many of my white friends hesitated when I cheerfully told it, trying to  ascertain whether it was OK to laugh or not (FYI: it is OK to laugh, ‘cos it’s funny). What is less amusing is realizing how many people don’t trust themselves and others enough to explore where the humor comes from, and they are too afraid of how they may be perceived to honestly engage in conversations about race. So, imagine my sheer delight at attending a performance of Lydia R. Diamond’s new play Smart People, directed by Peter DuBois, for the Huntington Theatre Company. This sharp comedy concludes the Huntington’s 2013-2014 season, and it had me in stiches all night.

Smart People is aptly (and wryly) titled; four headstrong, Harvard intellectuals—a psychologist, a neuroscientist, a doctor, and an actress—cross paths and seem to trip over themselves to rub each other the wrong way. Most of the conflict in the story revolves around the work of the neuroscientist, Brian White (Roderick Hill), a Caucasian researcher who claims to have proven the existence of the neurobiological root of racism. He struggles to understand the resistance of his colleagues, students, and even his friends to his work and its implications. Brian risks alienating his best friend, Jackson Moore (McKinley Belcher III), an African-American surgical intern facing what he perceives as more tangible professional barriers than those Brian faces. Despite confronting similar racial challenges, actress Valerie Johnston (Miranda Craigwell) butts heads with Jackson more often than not in their clashing notions of how to navigate one’s racial legacy. As if things weren’t interesting enough, throw in Ginny Yang (Eunice Wong), a Chinese-Japanese-American tenured-Harvard psychology professor with a genius grant, a high-achiever who has had to battle on almost every front in academia and romance, dealing with sexism, racism, “yellow fever,” you name it. Oh, and she also happens to be Brian’s lover.

The play’s title is deceptively simple, and points to what I found to be most compelling in this new work. This liberal, East Coast-dwelling, highly-educated group of people seem almost mechanically engineered to be able to compartmentalize their experiences in order to honestly and openly engage with each other on the subject of race in contemporary America. But for the most part, they can’t. People, even smart people, can be emotionally messy and difficult, and their constant mistakes and abrasive interactions hurtle the action of the play forward. My first impression of this group made me think an apt revision to the title would be Smart People with Zero People Skills.

It takes a delectable while to warm to these prickly characters, but I certainly did, thanks, in large part, to the episodic nature of the script, in which we see glimpses and snatches of each of the characters’ lives. The performance moved swiftly and never felt choppy, due as much to the very clean and smooth set transitions and costume changes as to the script. The scenic design by Alexander Dodge was highly aesthetic, functional, and thematic. The audience at the Calderwood Pavilion was first greeted by an empty stage, framed by an architectural backdrop of polished wooden panels and slim metal beams. It exuded an academic, sterile, and clean environment, words that could describe the multiple settings coming to life on stage (university lecture halls, hospital rooms, restaurants, shopping malls, even living rooms), words that belie the play’s subject matter. The set, on two tiers, could also be divided in half, producing up to eight different spaces for scenes to develop. Sliding panels revealed and hid these different spaces, allowing for extreme ease in prop, furniture, and even actor transportation. To top it all off, images were projected during certain scenes (including the opening), easily reflecting off of the lightly-colored wood to great effect (excellent projection design by Aaron Rhyne).

Gorgeous set, props, and projections aside, Smart People takes you one step further into this very familiar Cambridge world with its portrayal of its characters’ vulnerabilities. For all the fun of Diamond’s one-line zingers, there are more subtle moments in which the audience stopped laughing and really held its breath. Unfortunately, some of these moments worked more effectively than others.

Hill’s rendition of the occasionally asshole-ish Brian was all the more poignant in his peak moments of quiet frustration, his desperation not only at being punished for what he perceives as brilliant scientific output, but also at being misunderstood in his moral responsibility to report his objectively measured findings. The multiple scenes in which he is at pains to communicate his “white guy” position to Jackson, Valerie, and Ginny are potent and resonant.

Craigwell’s Valerie finds her best vulnerable moments in highly comedic scenes, an impressive accomplishment. As Valerie auditions for various theatrical roles, she mirrors the cold, dismissive, and even racist responses and demands of her invisible evaluators. Her facial and vocal retorts, thinly veiled by the lines of Shakespeare and Ibsen that she ostensibly mouths, are incredible in their sass and defiant power.

Belcher’s Jackson was harder to emotionally connect with. While Belcher hit many comic high points (particularly in his scenes with Hill), I felt like I was intellectually responding to his plight as an overworked medical practitioner, struggling to do good while swallowing bitter mouthfuls of injustice, rather than viscerally feeling compassion for him. His argumentative outbursts seemed to be the least effective in the play. I am not sure if I would pin the cause on Belcher’s inability to hit more subtle points than extreme anger or annoyance, or if Jackson’s character was just not as carefully crafted as the others.

This drawback almost completely fades in light of the character of Ginny. Ginny’s arc is arguably the most powerful in the play. She is the racial minority who has “made it,” the self-proclaimed wunderkind, the impatient, Blackberry-dependent, shopping-addicted, type-A striver who conceals multiple explosive passions: compassion for the oppressed Asian-American women she works with, growing affection for a man who resents her significant achievements, and rage at the systematic institutional discrimination that has forced her to push herself beyond endurance. Wong kept me mesmerized, and the more glimpses of Ginny’s conflicts that she carefully chose to reveal, the more that I appreciated the intelligence of Diamond’s text and the opportunities that text provides for talented actors.

Bottom line? This show is hilarious. Let me repeat: this show is hilarious. Diamond’s crackling dialogue and hefty one-liners, combined with DuBois’ direction of these fantastic actors make for an evening of great comedic beats, seamless transitions, and steady pace. Even if Diamond’s text didn’t plumb deep emotional and intellectual depths on the thorny issues of race, cultural assimilation, confrontation, and empathy, I think I would still nag you to go see this show. The Huntington has reignited my excitement and anticipation of just what an evening at the theatre can do.