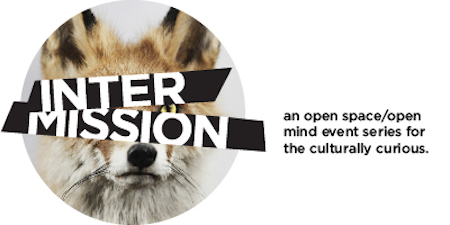 Canadian Stage’s Intermission is a new immersive event series inspired by the current programming of the company. Vol. I drew on Robert Lepage’s hit from last season, Needles and Opium, and the upcoming multi-media piece Helen Lawrence, using music and media to suggest the underground art scene of the 50s and 60s. The series seems to be aimed at the young artistic crowd that favours “culture”, but not necessarily theatre.

The event took place in the lobby and courtyard of the Berkeley theatre, as well as the Berkeley itself, none of which particularly lend themselves to underground art scene vibes. Because the music portion of the event was staged in the lobby (on the landing in front of the Box Office), it felt a bit awkward as actual theatre-goers arrived to pick up their tickets from the bar and later had to cross back through on their way out the front doors. The installation by projection artist Adam Carlucci was found in the Berkeley Theatre, with no explanation from those at the door or inside the space. I later found out that certain elements of the installation were triggered by motion, an interesting and vital piece of information that I gathered through conversation with another guest.

There were many strong elements of the evening, but unfortunately they didn’t seem to fit together quite right. Michael Rault played an excellent set, along with jazz duo King Weather. Sky Blue Sky served their delicious sandwiches out in the courtyard. Carlucci’s installation was fascinating to watch, although the exposed brick of the Berkeley is not an ideal surface for projection. Overall, every element seemed to exist separately, which to me is the opposite of an immersive experience. I am puzzled as to why the musicians didn’t play their sets in the Berkeley, directly on the floor with the rest of the crowd. The bar and sandwich station could have stayed in the lobby, and we would all have been forced into a smaller space, encouraging conversation among guests and discussion of our collective experience. I love the premise of this series and I do think that expanding programming beyond traditional theatre performance is a great way to attract new audiences. I sincerely hope Canadian Stage learns some valuable lessons from Vol. I and continues to push its audiences to experience culture in new ways.

I look forward to coming back.