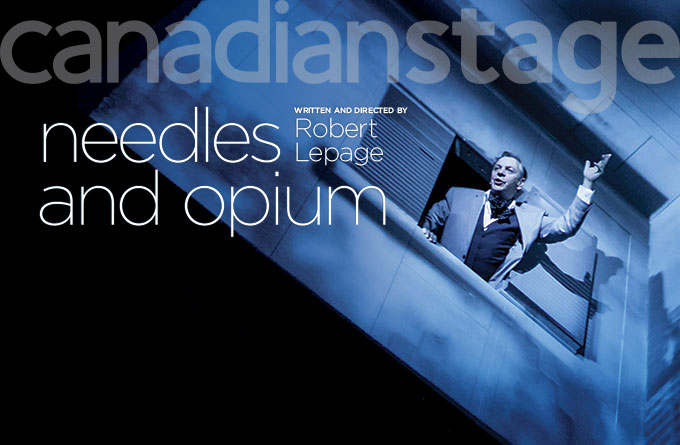 I have no idea who Robert Lepage is. Shame on me. Well, I haven’t been all too familiar with any of the directors whose work I’ve discussed for this website – some famous, others not. It’s clear that my background is not in theatre. Lacking a refined perspective, I once again assert the minor (but not insignificant) value of naivety (or in this case, erroneous misinterpretation) for criticism. It comes as no surprise then that, contrary to popular opinion, I had mixed feelings over an apparent ‘masterpiece’ of Canadian theatre. Said masterpiece was Lepage’s re-staging of his twenty-year-old play Needles and Opium, which took place this past November at Toronto’s Bluma Appel Theatre. Here I hope that a few sweeping generalizations can at least provide fodder for the people who know what they’re actually talking about. In all honesty, that person is likely you.

From what I have gathered from his Wikipedia entry (the extent of my knowledge), Robert Lepage is a highly lauded shaman and star of Canadian theatre. This is great; but what I am curious about is why the retrospective update of old work? Because I am unfamiliar with him, I have to consider this play as a contained package. The story tracks three individuals – Jean Cocteau in 1949 New York, Miles Davis in 1949 Paris and a lonely regular man named Robert (presumably modelled after Lepage himself) in 1989 Quebec. As Robert grieves the departure of a former lover by seeking out the help of a hypnotist, his story is intertwined with the addiction issues of Cocteau and Davis from prior years. So what is it about Needles and Opium – Lepage’s narcissistic tale of addiction, illusion and art – that makes it relevant today?

These questions were hard to consider under Lepage’s mesmerizing visual direction. He chose an alluring, complicated trick  – a suspended, angled, constantly rotating stage – that practically co-performed the play. Concave and three-sided, it took on the illusionary view of looking down into a corner of a room at one rotation, then the appearance of looking up into a ceiling corner at another. As it turned, gravity flopped trap doors open and closed to reveal beds, tables and chairs while suspended actors fly in and out of doors and windows to perform new scenes across time, narratives and continents. Perfectly synced video projections accurately painted the half-cube’s surface with an ever-changing array of wall textures, cityscapes, skies and other illusions, even as it spun.

The action and aesthetics of this rotating ‘cube’ were hypnotic. Due to its angled shape, it was able to actualize an uncanny point of tension between two and three-dimensional visuality for the audience – a challenge to our regular linear perspective. It had an M.C. Escher effect where angles could either recede or protrude while familiar shapes would seamlessly transform into new disguises. The seductive and dizzying affects brought by the mobile stage, not part of its original 1989 debut, offered a highly visual and sedative experience not dissimilar to Robert’s choice of therapy. Unfortunately for myself, the illusion ran dry after a period of time. Positioned right at the centre of a darkened stage, the half-cube/windmill construction took only a quarter of available visual space. As a viewer, my eyes were hungry for something to be exposed beyond the confines of the illusionary cube. I wanted relief and grew tired of looking in one direction and found this lack of extraneous happening a regrettable waste. The oddity of this stage, though, was exceptionally interesting given its shifting perspectives and also for the strange way the actors’ bodies fit into this dimensionally complicated space. I would enjoy seeing this applied again – whether in film, photography or theatre.

Riddled with cultural references and philosophical metaphors, the play (in regular art-star fashion) was lofty and pretentious. There was something about the play itself that didn’t feel as up-to-date as its high-tech visuals, perhaps because loaded name-dropping and open philosophizing is not as common nowadays. The creative arts are now increasingly accepted into social relevancy making the impulse to over-intellectualize less of a crutch for legitimacy. Much of the play’s referencing would require a lecture to properly sift through. The predominately elderly audience didn’t seem to mind (although I did hear some after-play murmurs), yet the simple arrogance of comparing yourself to the likes of Cocteau or Davis speaks for itself. I left Needles and Opium with some captivating images as well as a list of philosophical references that I’ll never look up. Although not quite in the ‘For Fans Only’ territory, Needles and Opium sufficed to please for predominately aesthetic reasons. Its original audience and those familiar will find a dazzling twenty-first century update. For myself, I left asking: “Did this change my life?” And the answer is that it didn’t.