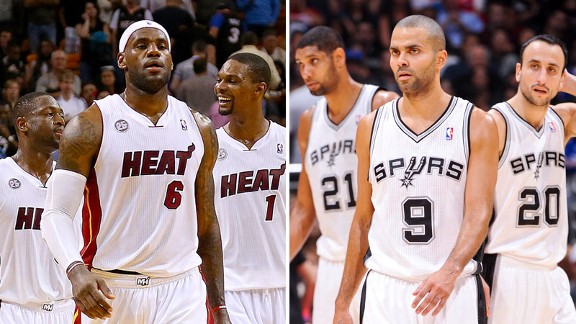 Here we are again. Another NBA Finals, another Miami Heat-San Antonio Spurs matchup. For the Heat, it’s their fourth straight trip to the Finals, where they’ll be gunning for the coveted three-peat. The likes of which hasn’t transpired since the early 2000’s when Kobe and Shaq were still teammates. For the Spurs, this is their second straight trip to the Finals, where they’ll be eyeing their fifth championship since 2003. Up until last year, their Finals record was a perfect 4-0, but some late game heroics by Ray Allen left them with a single blemish at the hands of the Heat. So, this year’s championship is just as much about vindication as it is about winning.

The storylines for this year’s Finals are pretty much the same. Is this one more Finals win to further cement Lebron James’ impeccable legacy?  Or is this one last championship for Tim Duncan before he rides off into the sunset and a final coronation on what is already a legendary career?

Although those questions will certainly be on most fans’ minds, this NBA Finals represents so much more than that. It’s the contrast of two different dynasties. One built on the old paradigm of accumulation of talent through the draft and winning with team basketball. While the other built their lineage through deft free agent signings and an exploitation of one-on-one matchups that tilted the scale to favor them. So who’s right?

Let’s get to the heart of this paradigm shift. When you look at the San Antonio Spurs, they’re hard to categorize with teams like Miami, New York, Chicago, or Los Angeles. They’re a small market team, so inherently there’s already a built-in disadvantage. Yes, Tim Duncan, Tony Parker, and Manu Ginobili are the cornerstones of this organization, and that’s not a bad foundation to have. But Duncan and Ginobili are in the twilight of their great careers. Parker is still in his prime and continues to play at an extremely high level but doesn’t carry nearly the same cache as the Heat’s three superstars. Their coach Greg Popovich is just as important to the success of this team. The reigning NBA Coach of the Year is a master strategist that has carefully crafted each component of the team to his liking and is a tremendous asset to have on the sidelines, but the game is still played on the court.

The Spurs’ style of play is straight throwback to a different era of basketball, something Popovich learned under Hall of Fame coach Don Nelson during his Run TMC days and infused with his own brand of discipline he gained from his time in the military. Granted, the Spurs are notorious for their lock down defense, but a team-minded offensive approach to the game can be lethal when they’re hitting threes. This team is reminiscent of the Chuck Daly Bad Boy era Detroit Pistons basketball. Each player in the rotation playing an integral part in the overall system. Year to year, every player acquisition is carefully scrutinized by Popovich and GM RC Buford and each draft pick is diligently scouted and vetted to make sure they fit a required role within the team. Nowadays, coaches like Popovich are being replaced by analytic fanatics who are more obsessed with numbers and are less concerned about the fundamentals, skill level, heart, and determination it takes to be a great basketball team. Which makes Popovich a dinosaur and the last of a dying breed.

We contrast that with how the Miami Heat built their dynasty. They didn’t set the standard for today’s NBA, but they certainly reinforced the precedent the Boston Celtics set when they traded for superstars Kevin Garnett and Ray Allen to pair with their own superstar in Paul Pierce. The three superstars came together to form the first super team. And after it netted them two finals appearances and one championship, the Heat wisely decided to take a page out of that book. In the summer of 2010, they brought in arguably the greatest player in basketball in Lebron James and a marquee big man in Chris Bosh. They combined James and Bosh with former NBA Finals MVP Dwyane Wade and formed one of the most formidable super teams the NBA had ever seen.

And to their credit, it paid immediate dividends. They made it to the Finals in their very first year together, and although they didn’t win that year, they won the next two. Now, every other big market team is trying to replicate their success. Today’s NBA has begun to shift towards a model traditionally employed by the MLB, where small market teams serve as feeders for the big market teams. Superstars around the league have taken notice of the Heat and have started to cluster together on these big market teams. The hope is that it will not only increase their odds of winning a championship but can also maximize their exposure and endorsement deals. And who can blame them? You can not only be victorious but also win on the biggest stage imaginable while your market value continues to skyrocket.

Although the Heat didn’t accumulate their team through traditional methods, they are proof that it still takes hard work to win championships. They’re a defense-minded team, but their pedigree is winning by utilizing the embarrassment of offensive talent they have in their three superstars. It’s an offensive brand of basketball based on isolations, where they can fully exploit the unique skillset of their 6’9 point forward.  With James, they have the perfect facilitator to run their offense. He’s a man who’s just as dangerous distributing as he is scoring, and teams are basically left to pick their poison. If a team chooses to double James, the Heat know that Wade or Bosh can take advantage of their one-on-one matchup. The rest of their roster is rounded out with solid contributors who can knock down the handful of open jumpers most teams give them each game. Some credit also has to be given to Heat coach Erik Spoelstra, who through the years has proven himself quite the adept tactician and has built an incredible offensive identity around his three superstars.

ESPN has already started likening the Heat to Michael Jordan’s championship teams with the Chicago Bulls, but there’s one glaring exception. Jordan never had the benefit of playing alongside two superstars like Wade or Bosh. Sure he had Pippen, but the Bulls compare more favorably to the Spurs than they do to the Heat. Pippen was a great player in his own right and I don’t mean to take anything away from him, but he is not the same caliber offensive player as Dwyane Wade nor does he offer the advantage of height and low post game that Chris Bosh does.

Taking the comparison a step further, the Heat is a team that is dependent on its big three, and every offseason there’s the inevitable reshuffling of role players around them. They lose key contributors every offseason, but always seem to pick up a handful of skilled veterans who play for the veterans’ minimum for a chance to win that elusive championship with King James. So, as long as the Heat keep their core in tact, they never seem to lose continuity or chemistry.

Yes, the Bulls were built around Jordan, but those championship Bulls teams consisted of players they accumulated over time. Chemistry was developed over the course of several seasons before they were playing at a championship level. People seem to forget that besides Jordan and Pippen, those teams were stacked with role players like Horace Grant, Bill Cartwright, BJ Armstrong, Toni Kukoc, Dennis Rodman, Steve Kerr, Luc Longley, and John Paxson. Each one of those players were key contributors in their own way and played a very specific role in the triangle offense. Even Shaq and Kobe’s Lakers compare more favorably to the Spurs than they do to the Heat. Those Lakers teams were able to contend at a high level because they complimented their two superstars with guys like Glen Rice, Derek Fisher, Robert Horry, Rick Fox, and Brian Shaw to name a few.

To the Heat’s credit, the game has changed, and they changed their overall approach to the game to this paradigm shift. This has become a league full of mercenaries, and team loyalty is a thing of the past. Players want to win, and they want to win now. Who could hate on the Heat for knowing how to play the game? Who wouldn’t want to win championships while living in a city like Miami? They deserve a lot of credit for enduring the negative blowback that came from “The Decision” of 2010 and never letting it become a distraction. Based on their shrewd business decisions, the Heat deserve to reap the benefits of their spoils.

I have to admit, I have a bit of a bias. I do love the underdog a small market team like San Antonio signifies- it’s not only the hometown factor for me, but they embody everything fundamental about the game, everything I was taught to love about the concept of team basketball. They win with absolute humility and class. But there still is a part of me that gravitates to the flare and showmanship of a team like the Heat. They offer the excitement fans pay to see. It takes a lot more than talent alone to make it to four straight NBA Finals, and the Heat play with a sheer determination and desire that few teams truly have. Plus, who doesn’t love a winner? I know I rooted for Jordan’s Bulls when they were winning championships, so I definitely understand allure of the Heat. They are champions in every sense of the word.

So, in summation, I think it’s hard to disagree that we’re experiencing a definitive shift in the NBA, and this Finals could potentially serve as that last bridge between old and new. It’s an era of basketball that will be missed, but at the same time, I’m excited to see what the future holds. Wherever you stand on the subject, the game itself is meant to evolve and that includes the business side too. At the end of the day, we all just want to see some great basketball, and I’m confident this year’s NBA Finals will deliver that in spades.