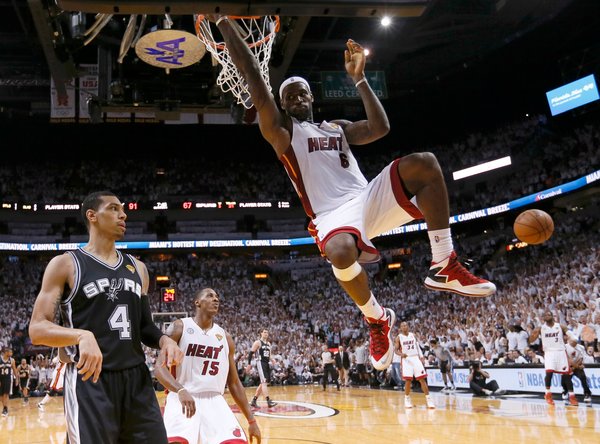 A Goat, The GOAT, and the NBA Finals

In the days between Game 6 and 7, I dreamed of the article I’d write after the Spurs won. Championing coherent role players, fluid ball movement, and hard nosed defense, another ring for Gregg Popovich, Tim Duncan, and the rest of the silver and black would cement their legacy as the only true post-Millennium dynasty (an argument could be made for the Lakers, but there was too much roster turnover to qualify). While reluctant to praise the once-hated boogeymen of the Western Conference, I’d come to terms with their greatness and even grown to genuinely like them: finding Tony Parker more irrepressible rascal than nagging pest; admiring Duncan’s consistency rather than deploring his lack of flash; and accepting Manu Ginobli as the often misguided but brilliant ball magician. I was going to praise the emergence of Danny Green and Kawhi Leonard, comparing their joint breakout series to Paul George’s debutante ball, wondering if one of these young bucks deserved the Finals MVP over Duncan (which of course he would have won).

That reality, where I merrily cite statistics and cheer individual personalities, content in the existence of worldly justice, does not exist.

I’ll spare you the column decrying the Heat, nitpicking each player’s worst qualities and proving why they deserve our collective hatred. Hell, I could spend 1,000 words describing, in gratifyingly shocking detail, the immense joy I would feel punching Mario Chalmers right in his smug, stupid face. There’s an ocean of ill will towards Dwyane Wade just waiting for release, calling out his in-game cheap shots, mocking his pre-game fashion, and ridiculing his feeble attempts to rebrand himself, weighing which nickname insulted good taste more: Wow, Way of Wade, or Three, his new ring count.

In the interest of competitive spirit and giving due credit, I promise a column-length moratorium on potshots against the Heat. It’s my reluctant coronation gift to Lebron James: a celebration, not a trial.

Even in the middle of the series, without an inch of historical breathing room, pundits placed the bout in the Pantheon of all-time greats. With two peaking teams of near equal strength trading wins and bringing out the best in their counterparts, before the Larry O’Brien trophy saw court, the chapter was earmarked for eternity. The stars took turns shining, quarter long body blows iced outcomes, and the last two games played back and forth on a tension-filled tightrope, both coming down to the final seconds. In the end, the difference was what we always knew it would be: the best current player, Lebron James.

It’s tempting to turn Ginobli into a goat, citing his illogically dangerous passes and woeful shooting in the clutch in Games 6 and 7, but even if the wily Argentine had his head together, nothing was coming between the Heat and another banner. James received significant support from his backing band- Wade delivered a few scoring barrages, Chris Bosh came through with two defiant blocks and a vital rebound to save Game 6, Shane Battier rediscovered his shooting stroke- and displayed both individual brilliance and admirable leadership. With Lebron hitting his stride and his teammates following suit, that brash projection of “not four, not five” championships no longer seems out of reach.

Post-game, I became even more impressed. Humble, hungry, mere moments past being crowned the champ, he was talking offseason improvement, securing his status at the top with the dedication that’s gotten him this far. Lebron is miles away from the spoiled child-king seen with the Cavaliers and early years of the Heat, the virtuoso so indulged that he lacked the necessary grit to close the biggest games. Now, he is a mature, confident presence, a model league leader and possible candidate for GOAT (Greatest of All Time), saying the right things, making the right plays, and liberally bestowing goodwill.

There’s a part of me that will always resent Lebron’s rise, how it displaced Kobe Bryant’s legacy markers, but it’s impossible to watch James with anything but admiring awe. His force, agility, and endlessly faceted game have no parallel, present or past. In Game 7, the Spurs played the odds and backed off from Lebron at the perimeter, daring him to shoot threes and midrange jumpers, knowing that he has historical shot problems and trying to avoid him bulldozing straight to the rim. There was a time when that strategy would have worked. Now? Lebron accepted the challenge and drilled the dared jumpers, keeping the Heat out of the Spurs’ reach.

He defends every position, adjusts his approach on the fly, makes shots from anywhere on the court, and leads his team as a mature, responsible captain. To top it off, he’s just 28, in all likelihood only entering his prime. Without any hint of hyperbole, if he continues at this pace, Lebron James may very well take Michael Jordan’s place as the default GOAT in any discussion. I used to root against Lebron in Kobe’s name; now, I welcome his triumph for basketball’s sake.