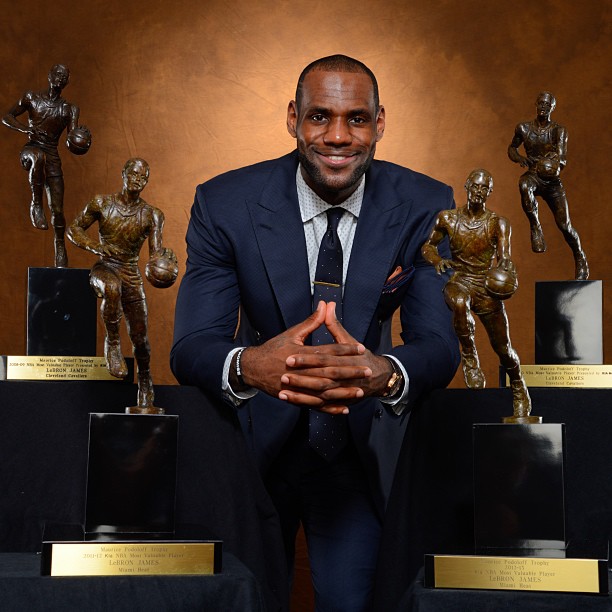 Once again, the King was crowned MVP. Yeah, he had a stellar season and deserves it, but the vaulted company he joins as a four time winner feels more than a little premature. Like every step of his career, we rushed to decorate the greatest player in the world, fueling his sense of entitlement and disregarding others’ achievements to the detriment of the historical record. I’m not saying Lebron doesn’t deserve our awe and respect, because he very clearly does, I’m only worried that our single-tracked focus on his might does disservice to the larger game.

Really, it’s the same argument I made in this piece comparing the legacies of Michael Jordan and Charles Barkley. The greatest rack up their medals and the often more compelling also-rans only get more shoulder chips. Was Lebron the Most Valuable Player this season? Probably. Does he deserve three of the last four? Absolutely not.

Before we get too invested in uproar, does the MVP actually matter? Is this award worth fighting over? The answer, unfortunately, is yes. Although today’s league has the benefit of better video documentation, when the history books are written, MVP’s, All-Star appearances, and other accolades work like merit badges to differentiate the players. Whether or not we want the MVP to be important, it is, and it’s going to stay that way.

Objectively speaking, the biggest travesty of the modern era, limited to the Most Valuable discussion, is Kobe Bryant’s relatively empty mantle. Now, we can get into specifics on each season, who won what and how and why public opinion was against the Mamba at the time or for some another schmo, but excuses and rationalizations do nothing to correct this simple, unspeakable injustice: Kobe won Most Valuable Player exactly once.

Yes, the finest player of his era, challenged only by the Big Fundamental, Timmy Duncan himself, was deemed so on only one occasion. It shouldn’t upset me, or anyone really, as his wealth of championship rings looms high above all current takers, but no matter how pivotal he was, those victories can always be attributed to team achievement, not individual merit. Kobe deserves better; he earned the recognition that, for multiple seasons, he was a singular force of basketball-based transcendence, the most dominant and suffocating athlete in the league.

What does this have to do Lebron? Kobe’s recognition gap was in part a necessary byproduct of our christening Lebron as the Greatest Basketball Player in the World years before he’d truly earned the title. Now, when he truly deserves the honor, the in-season significance of his talent is dampened by the incongruous pile of history at his feet. Lebron James is excellence incarnate, but this early in his prime, does he really have three more seasons of sheer dominance than Kobe? The answer, assuredly, is no.

What’s to be done? Nothing, there’s not a way fix it. History is recorded and we march on, hoping that later generations can decipher a clearer picture of the modern NBA than we have tried to provide.