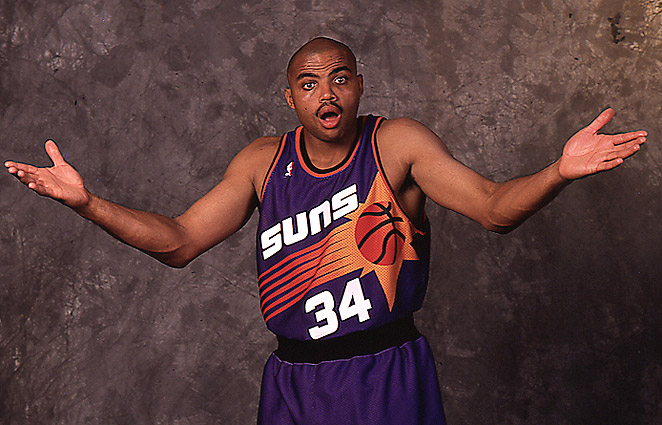 Over All-Star Weekend and weeks prior, we celebrated a legend’s 50th birthday, the maturation of the greatest basketball player to ever grace the court. Viewers were force-fed career highlights and barraged by personal profiles; Michael Jordan was everywhere and everyone had nothing but the best things to say. Though deserved, the celebration came at the expense of another legend, letting his same milestone slip quietly by. I am speaking, of course, of the venerable Sir Charles Barkley.

Chuck’s spent a long time in Jordan’s shadow, his entire career. Barkley dominated the paint, but Jordan reigned over the entire court. MVP-caliber seasons outvoted by Michael’s magnificence, the heartbreaking finals loss in Phoenix, the adoration imbalance in Barcelona in 1992; no matter how great Barkley was, he was never better than Jordan.

We remember Karl Malone the same, as a gifted post player that never crossed over as a champion. It’s a shame, giving these titans short shrift due to a lack of jewelry, but it’s inevitable in our win-first culture. Not that it’s a bad filter for historical considerations, only that there are other factors of remembrance.

I’ll get the bold claim out of the way: MJ is the best basketball player of all time, but Sir Charles might be the most entertaining. Michael is an assassin, cold blooded and efficient, providing marvels of athletic genius with a bare minimum of distinctive personality. I shouldn’t complain, considering my favorite current player (Kobe) uses the same tactic. That doesn’t mean I won’t.

In contrast, Barkley was a wrecking ball of human emotion, flying between all-out rage, self-righteous indignation, and good-natured charm without a hitch in his handle. Whether he was delivering post-game press conferences worthy of comedic praise, electrifying the arena with a thunderous two-handed slam, or throwing belligerent fans out of bar windows, he did it all with panache, with an effortless style that said, “If you don’t dig it, I don’t give a fuck.”

Again, I will freely admit that MJ is a superior player who made superior plays. He was just never as much fun to watch, not if you’re looking for genuine, popping personality. Jordan had the glazed-over intensity of a wolf stalking its prey. Yes, that is an artful act to watch, but I’ve always preferred the bear, bumbling through the woods, crashing through brush, letting loose a fierce roar, and then rollicking into battle, all with a gentle undercurrent of buffoonery.

If you want more pudding, look at their post-retirement careers. Jordan alienates almost everyone he can, spitting out decades of pent-up vitriol at his hall-of-fame induction, degrading celebrity autograph seekers with racial slurs, and popping up for the occasional underwear ad with fellow egomaniac Charlie Sheen. Barkley, instead, has reinvented himself as a talking head and general basketball ambassador, delivering the most entertaining and honest commentary on air, adding welcome absurdity to a bizarrely self-serious sports complex, and generally radiating an aura of goodwill*. You might want to watch Michael, but I’d rather hang with Chuck.

We celebrate Michael Jordan’s greatness, and rightfully so, but we cannot let his stack of MVPs and Finals victories overshadow his talented peers. History’s most enthralling stories are stocked with underdogs, with true individuals fighting against an indomitable force, sometimes conquering, often falling short. Like Socrates, Franz Kafka, and Lou Reed before him, Charles Barkley may not have garnered the contemporary recognition he deserved, but his strength of spirit and distinctive style will live on in every soul lucky enough to catch a glimpse of his fiery brilliance.

I never wanted to be like Mike. For me, it was always Chuck.

*Editor’s Note: he also was the star of one of our favourite SNL sketches of recent years. “May the force be…”