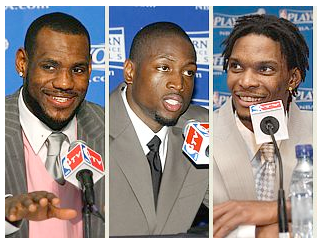 Ethics of the free-agent Super Team

If you’re a basketball fan, or even a sports fan (which I’m assuming you would be, since this is a sports-related blog) you’re aware that this summer’s class of NBA free agents is considered by many the most talented in the history of the league. This abnormal concentration of talent through free agency has given rise to speculation of a “Super Team” where Dwayne Wade, Chris Bosh, and Lebron James all join together on the same team (most likely in Miami) to maximize their shot at winning a championship (or more appropriately, many). Of course, everyone seems to have an “inside source” claiming they have some information of where these players will each sign, but when everyone claims to know something you can bet that no one knows anything.

But despite the specious likelihood of the scenario, the idea of this super-team is an intriguing one mostly because of it’s apparent uniqueness. And it does feel truly unique. Not in my memory (or it seems anyone else’s) do I remember the prospect of top level free agents plotting a super-talent coalition. Perhaps it’s mere coincidence that the NBA has never before had this kind of concentration of talent at the same time available on the open market, but surely it must have happened in another sport.
But no, it is an entirely different animal in the other two most popular sports in the US; baseball and football.

In both sports there are too many people involved on the field to have an effect the way this kind of free-agent-alliance would in the NBA. In football, a star quarterback-runningback-receiver combo is probably the closest thing you could get, but with 22 players on the field at once, many fulfilling completely different jobs, even that kind of star threesome couldn’t dominate the way three out of 10 players on an NBA court would, especially with any of those three able to control or contribute to potentially every play. The same argument can be made in baseball. Even the greatest players are one of 9 on the field and they only have 4 to 5 at-bats a game. They cannot dominate the way 3 dominant players can EVERY PLAY in the NBA. An ace pitcher can dominate a game, but even then, only half of the game (in preventing runs, not in scoring them, unless they’re in the NL and happen to be a dynamite hitter, which doesn’t exist) and then once every 5 days. 3 tops level starters are great, but together would not have nearly the effect the Bosh-Wade-Lebron (BWL) tandem would have.

Besides, the super-team argument can be made of the Yankees, particularly with the new millennium when the Yanks tried to buy their way to the World Series through free-agency. It took them 9 years with a (moderately) scaled back payroll and reliance on their farm system to deliver another Championship. And the Yankees had to go out and get way more than three top level free agents to even come close. Baseball is a game with simply too many variables, too much unpredictability, and too limited impact of each individual for three of the greatest players in the game to have nearly the impact that BWL would have. Add A-Rod, Pujols, and Hanley Ramirez on the same team and you’d have quite an offense, but if you make the rest of the team average, you’re still going to come out only slightly better than average win total. They’re certainly not going to run away with the best record, never mind the world series.

Now it’s no foregone conclusion that Bosh, Wade, and Lebron would win even one championship, they still have to play the games, but team BWL would be such a saturation of talent that I don’t think anyone would wager against them. They’d be more dominating than Boston’s big three if they were all in their prime, and the Celtics have made it at least to game 7 of the finals in the 2 years they’ve been healthy, despite their age. The point is, this scenario is special and different in that never before has the prospect of combining star players been so potentially dominating.

I still struggle with exactly how I feel about it. In one sense, they have every right to agree to play for the same team, to join forces in their own best interests and win championships. I can’t say if I were in their shoes I’d do anything different. If winning a championship is my prime concern and that’s the best way to do it, why not?

But then I get that feeling in my stomach that says something is wrong. Yes, they have the right to act in their best interests, but it feels like they’re rigging the system at everyone else’s expense. Miami Heat fans might be happy with that kind of super-power combo in Florida, but the rest of the league would only have to second best to look forward to. Is it right for those three to team up for their own interests if it comes at the price of the interests of the league as a whole? Isn’t the nature of competitive sports to be competitive?

And furthermore I hope they don’t join forces for their own sakes. Does the BWL tandem want Championships that are easy to come by? Does it really mean anything if they’re not fought for, if they’re hardly earned? Once you start taking winning championships as a given, what significance do those championships have? They amount to nothing more than a number. With Lebron and Bosh never having won a championship, and with Wade fighting tooth and nail for his, I don’t think any one of them would want the playoffs to simply amount to “another” ring.

But why the super-team idea would be bad for the league isn’t exactly the point of this entry and why it wouldn’t be in the best interests of the players involved, specifically Lebron, are related elsewhere (See Michael Rosenberg’s great column on why the super-team concept would be disaster for Lebron’s career by clicking here). No, the point of this entry is to observe this situation through a non-sports prism. This IS a unique situation in sports, certainly in the history of free agency in the NBA, NFL, and MLB, but it is not a unique situation in general. In fact, it is so common that there have been laws passed in the to confront this very issue over the course of the past hundred years.

I am no economist, but still, it was almost impossible to ponder this super-team and not think of the same economic situation that exists in the world of business. The words “collusion,” “anti-trust acts,” “monopoly,” and “barrier to entry” rush to mind. But, rather than dwell on the intricacies of things like cooperative monopolies, suffice it to say that laws exist in the US to prevent companies from doing what Lebron, D-Wade, and Bosh are reportedly considering. That is, agree to fix the system for their own benefit at the price of everyone else. In this situation, a few corporations agree to fix-prices, or have several small operations apparently running separately and competing with each other while actually being owned and operated from a larger entity, or simply coming together to force out all other competition and collectively reap a larger reward at the expense of small businesses. While each of these scenarios are different, they all share a few powerful actors basically strong-arming the system and purposefully marginalizing competition.

Now that sounds a whole lot worse than merely acting in your best interests, in these cases the two are are the same. Companies marginalizing competition BECAUSE it is in their own best interests. Team BWL would essentially be doing the same thing, coming together to create a monopoly in the League for their own benefit at the expense of the rest of the League.

Now, Wade, Bosh, and Lebron are not corporations, they are individuals, but if you take away the identity and simply view them by their incomes they are, from a financial standpoint, essentially the same as multi-million dollar companies. Just because power is consolidated in one person rather than throughout the company, are they really so different?

The US government has laws to prevent this kind of thing from happening. Collusion is illegal, Teddy Roosevelt was known as “the Trust-Buster” for a reason, and Intel was sued not so long ago for marginalizing competition in order to instate itself as a monopoly. There are countless examples that stretch back as far as modern industry does.

But this is not an economics blog entry, it’s a sports entry. So, where does this all lead? Am I suggesting the league make it illegal for players to team up in the way Bosh, Wade, and Lebron may do? No, of course not. That feels just as wrong as them actually going through with it. After all, companies can also merge together for their own collective benefit, just never to the degree where it would spell doom for the rest of an industry.

There are so many reasons why all of us fans should be hoping against this superstar alliance, and why the alliance wouldn’t be nearly as much in the interests of the players involved as they might perceive, but what I’m really saying is that we should look at how to confront the present by looking at the past. There is a consensus, developed over at least a hundred and fifty years of economic history that this kind of thing shouldn’t happen in business and steps have been taken accordingly to prevent it. I hope Bosh, Wade, and Lebron take a lesson from history and decide not to make us confront the ramifications of this NBA-like collusion because history has already shown us how it plays out and in the end, no one is happy about it.