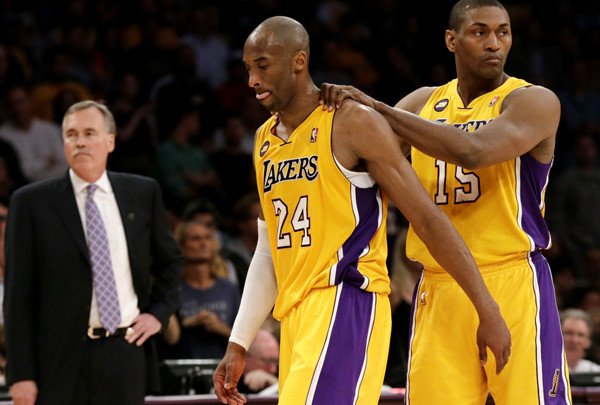 In the fourth quarter against the Warriors, Kobe Bryant moved against Harrison Barnes and began a cut to the rim, falling well short with minor defensive contact and a sudden twist, an improbable foot placement and tension tweak that lead to a tear in his Achilles. Staggering, he made two free throws, tried to walk it off, and quickly signaled to be let off the court, finally facing an injury that not even his superhuman adrenalin could overpower.

Once the dust settled, only one question remained: what does this mean? Let’s go through the impacted parties, one by one.

Kobe Bryant
For reasons that should be self-evident, Kobe is the individual most impacted by his injury. Before anyone even considers the eulogy, know that this will not be the end of his career. The most stubborn and dedicated athlete to play in the NBA will not let an Achilles decide his fate, despite the fitting mythological association, he will rehabilitate, become great again, and retire in a blaze of glory. If anything, the time off might be the rest that Kobe needs to get back to top form instead of wasting his potentially last season on the work still in progress that is this incarnation of the Lakeshow.

Lakers Fans
My first thought, watching the replay again and again, still trying to come to terms with this sudden and cruel reality? This is the end of the world. I’ve settled down since, but there’s still plenty of apocalyptic terror rattling my head.

Dwight Howard
Dwight Howard was recruited to replace Kobe upon retirement, but his number got called early. While Magic Johnson’s assertion that this is Dwight’s audition for free agency is extreme, as no team in their right mind would turn him down, this is his first opportunity to prove that he can be the new centerpiece of the Lakers. It’s time to put on the big boy pants.

Mike D’Antoni
As evidenced by the Buss family’s quick trigger finger in recent coaching decisions, Mike D’Antoni has spent most of the season a phone call away from the unemployment office. Rationalists claim that no owner would pay three coaches under contract, but Jim Buss is just crazy enough to try, especially given fan demands for Phil Jackson. Lucky for Mike, some of that pressure to avoid the axe by proving his mettle in the playoffs has been lifted by Kobe’s injury. No matter the outcome now, D’Antoni can point to the Mamba’s absence as the excuse. Barring tremendous embarrassment, the Pringles Man gets a free pass this go around.

Mitch Kupchak
Even more than Dwight, Mitch Kupchak was thrown into the pressure cooker the moment Kobe went down. With Kobe out for 6-12 months, it’s up to Mitch to persuade Howard to stay and build a roster around him that will be an effective stopgap for a season as well as complement Bryant upon his return. There’s talk of using the amnesty option on Kobe’s XXL contract, but the blowback from Lakers nation would be far too great unless we knew for sure Kobe can’t play. With little cap room, few tradeable assets, and a roster full of holes, Mitch has his work cut out for him this summer.

The Western Conference
The Lakers were looking to be a first round challenger, maybe swinging for two given the right breaks, but without their offensive assassin, one and done seems almost predetermined. Even though Kobe couldn’t swing the power imbalance himself, he’s missing the chance of spreading some scare, reminding the league that the West has not yet been won. The Thunder and Spurs can rest a little easier this year without the number one neighborhood threat in the picture.