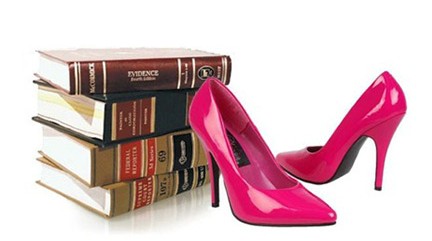 Blonde is Not Hot

Legally Blonde: The Musical (music and lyrics by Laurence O’Keefe and Nell Benjamin, and book by Heather Hach) is an outstanding piece to feature young, strong female musical theatre performers. Following the novel by Amanda Brown and popular movie by Metro-Goldwyn-Mayer Motion Pictures, Legally Blonde tells the story of pretty SoCal “It” girl, Elle Woods (Cierra Bartelt), as she is surprisingly (or not-so-surprisingly) dumped by her Senate-aspiring pre-law boyfriend, Warren Huntington III (Dylan Waterhouse). This break-up inspires Elle to follow her ex-boyfriend to Harvard Law (we suspend disbelief that the fashionista earned a 175 on her LSATs), where she learns of Warren’s recent proposal to the bland Vivienne Kensington (Kaylee Bugg). To win back the man that she loves, Elle struggles to impress and master the law, most notably in the Criminal Law class taught by the shark, Professor Callahan (Justin Reeves), with a little help from budding attorney and Teaching Assistant Emmett Forrest (Christian James Potterton) and the charming stylist Paulette Buonafonte (Bridgette Graham). With the once-in-never opportunity to assist Professor Callahan in defending buns-of-steel aerobic instructor Brooke Wyndham (Adele Leikauskas) for the murder of her billionaire husband, Elle learns about the strength and perseverance that she has as a student, a woman, and a person, and what it truly means to be “legally blonde.”

With an ample appreciation and love of the iconic movie, I attended the Berklee’s Musical Theater Ensemble and Orchestra’s production. As a lawyer, the 2001 movie provided much-needed laughs and commentary on the legal profession and the trials and tribulations of law school. Unfortunately, the Berklee production felt like a stomping of last year’s Prada shoes, honey. Berklee College of Music is a nationally-known and recognized school “to educate, train, and develop students to excel in music as a career.” They do not seem to educate or train students in how to excel as performers, missing the crucial part of acting and developing characters onstage. Bartelt’s Elle misses much of Reese Witherspoon’s classic quirky charm and effortless grace. While Bartelt offers impressive pipes when she sings, her dialogue and relationships rarely sparkle or feel natural, relying on a laugh and a smile to glide her through any spoken conversation until her next big solo.

Fortunately, Potterton’s Emmett seems to excel beyond Luke Wilson’s off-handed and self-deprecating humor. The always-charming onstage (but rarely off-stage) Christian Borle originated the role on Broadway, and Potterton picks-up Borle’s insecurity and awkward charm as easily as a new Dolce & Gabbana suit. He offers impressive vocal training and technique, but, more importantly, he creates a lovable and relatable character for the audience to cheer and for whom they hope will succeed. Equally effective, but especially in her vocal prowess, Graham’s Paulette is a more nuanced, fulfilling, and rewarding take on Jennifer Coolidge’s busty turn. Graham is a powerhouse of energy and raw emotional hope, transcending the cheap “Ireland” with enough emotional baggage of a long-lost love to have you rooting and cheering for her and the hunky Kyle, the UPS man (Taylor Woodard—who, let’s be fair, did not live up to the movie or musical’s hype for the character, but displayed such studly confidence that he got the catcalls that he deserved).

And that’s about where the accolades end and the production heads towards the campy and un-enjoyable and aching chewing of a stale piece of bubblegum. Waterhouse’s Warner is a stiff and ineffective leading man; he misses Matthew Davis’s effortless upper-crust breeding and charm, blending into the bland background set like an icky fly on the wall. Bugg’s Vivienne has some good moments, but also couldn’t compete with Selma Blair’s deadpan humor. With many lines extracted straight from the movie, it is hard for characters like Warner and Vivienne to be anything but cookie-cutter imitations of the cult-classic movie; in fact, without the proper acting training, I wouldn’t want them to be anything but that. Most, if not all, of the ensemble does not possess the acting training and experience to tackle the iconic roles with their own creativity and imagination without executing flat and forced deliveries of the classic lines. I blame Directors Rene Pfister and Peter Cokkinias for their unseemingly unrestrained directing of this musical, when the actors seem to be moving in unmotivated and uncaptivating directions across the stage and through the play. I felt bad for the choreographers (who shall go unnamed) for what seemed to be an ineffective delivery of what should be popping choreography and movement; I have seen better choreographed dancing at a club on a Saturday night, and the stiff and jerky movement by most of the ensemble resembled the awkward motion of Crash Dummies attempting the Thriller dance.

While some of the ensemble had good moments as cameo characters (kudos to Quitman McBride III as Carlos and Leikauskas as Brooke), the moments are too sparse, too fleeting, and too inconsequential to save the musical. While Berklee trains its singers, it does not seem to train them as performers to execute even the most accessible movie-musical material. With ample noteworthy examples available on Youtube and an almost verbatim movie to follow, the musical should not feel like a flat-chested cheerleader fumbling through a cartwheel. The cool interpretation could be an active choice to depart from the movie, but this misguided attempt at originality is as mistaken as thinking that orange is the new black. Perhaps I’ll feel more positive about Berklee’s program after seeing another  show, but, for right now, I’m staying down the street at the more formidable training conservatory.