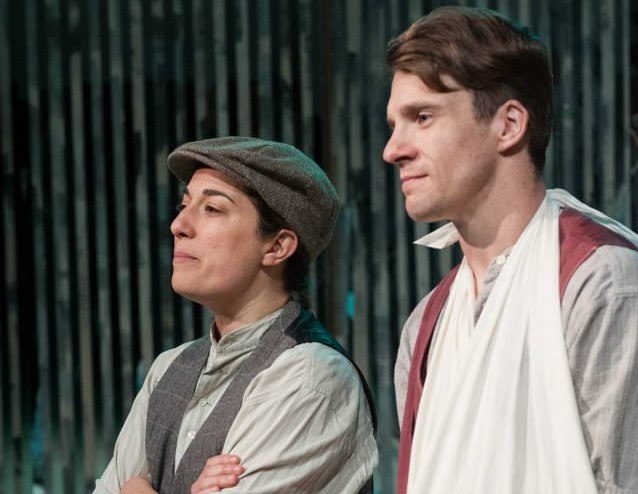 Shakespeare’s As You Like It offers one of his most accessible comedies. Featuring one of the Bard’s best female characters, the play is a wonderful exploration of sexual and romantic liberation and education, as personified in the diverse relationships in this classic play. The Actors’ Shakespeare Project delights in this energetic production, featuring some impressive younger talent in this aging company. The troupe’s greatest achievement, aside from telling the story in its plainest and simplest terms with outstanding success, is performing the work in Medford, MA’s Springstep Building. This venue allows the company to flex its creative design muscles as they adapt the space to serve their purposes while also allowing the Greater Boston community to access professional Shakespeare performance at an affordable price. Now in its 10th season, the Actors’ Shakespeare Project has grown dramatically, especially in their mission to offer the Bard’s work to audiences of all ages and experience levels. As You Like It shines as exactly how I’d like to see the troupe consistently perform.

As You Like It follows Rosalind (played by the witty and agreeable Brooke Hardman) as she escapes the stifling and dangerous court of her uncle, Duke Frederick (played by the versatile Joel Colodner), with her cousin, Celia (played by the delightful Mara Sidmore), and the clownish and rakish Touchstone (played with imaginative freedom by Paula Plum). Once in the Forest of Arden, Rosalind finds her love from court, Orlando (played with masterful charm by Jesse Hinson), who also escaped the wrathful eye and control of his elder brother, Oliver (played by the consistent Johnnie McQuarley). Rosalind, disguised as a young page, Ganymede, teaches Orlando to woo and love without the foolish pomp of a love-sick poet, offering some of Shakespeare’s most romantic and witty interplay between young lovers. The delightful foils of Jared Michael Brown’s Sylvius and Katie Elinoff’s Phoebe, and Plum’s Touchstone and Steven DeMarco’s Aubrey complete the dialogue of the gamut of love’s discourse. The always-clever Richard Snee (playing both Adam and Corin, among others) and the sassy Jennie Israel as satirist Jacques round out the cast with their truthful performances.

Director Robert Walsh impresses with his ability to find the joy and fun in this playful piece, featuring the strong fight choreography for which he consistently provides to the troupe, but also the simple songs, the acrobatics, and even a delightful bicycle chase. The play is propelled forward by the actors’ energy, lead by Hardman. Hardman is a sweet delight as Rosalind, performing the girlish charms and intelligent wisdom of the emotionally rich heroine with ease. Her strongest moments, however, come when she plays with her wit opposite both Sidmore’s Celia (one of the strongest performances that I’ve seen of this underrated and underappreciated sidekicks who shines in her own light and on her own merits in this piece) and Hinson’s Orlando (yes, yes, I want to see more of his work, though I’m unsure whether Orlando was the right fit for him, and I can see much more potential in a more conflicted and dimensional role). With this trio of younger talent, the possibilities for future seasons are unparalleled (though only Measure for Measure seem to offer them the true potential for success next season).

Plum’s Touchstone and Israel’s Jacques offer much to discuss, expanding well beyond this review. With an older repertory company of actors, I understand and respect the company’s continued creative uses for their wealth of talent. Additionally, I appreciated the breath of fresh air into the two iconic roles; while Plum lacked some of Touchstone’s typical wit, she plays the fool to masterful delight because of her liberated performance. Her Touchstone starts as a stoogish character, a la Groucho Marx, who sheds her masculine clothes upon entering the forest with Rosalind and Celia. Plum delivers one of Touchstone’s famous speeches with a twinkle in her eye for its keen intellect and wit, showing that beneath the beautiful exterior lies an impressive understanding for argument and debate. Such delivery makes her decision to marry the oafish Aubrey even the more comical and heartbreaking. Israel, on the other hand, charms with her sullen understanding of her outsider status, all the more poignant potentially because of her status as a woman among men.

The weakest performances come from Brown’s silly and misunderstood Silvius and Elinoff’s shrill and unmotivated Phoebe. The couple struggle under the play’s language and rarely surprise or delight, despite ample opportunity. Despite these weak performances, the production, as a whole, surprises because of its strong young cast. The Actors’ Shakespeare Project is known for its company of aging and educated thespians, limiting the canon of work available for performance. With the introduction and success of Hinson, Hardman, McQuarley, and Sidmore, the company may have found the youthful verve for its continued existence for the next ten years.

The beautiful Forest of Arden is creatively portrayed in the silver shimmering material hung from the walls and columns by Grace Laubacher as Scenic Designer, beautifully accented by Jeff Adelberg’s lighting. The use of the mirrors accents the piece’s natural introspective qualities for the audience to examine their own reactions to the play’s story and themes. Despite the Springstep Building’s limitations as a performance space, the creative design team provides ample playing space and subtle effect to make the Bard’s work shine as the focal point. While the costume design by Miranda Kau Giurleo is flattering in some respects, it seems to lack the nuance and artistic flair of the company’s prior costume designers.

The Actors’ Shakespeare Project has established themselves this season as one of the strongest classical troupes in Boston, boasting an impressive (though somewhat inconsistent) season (Romeo and Juliet and Henry VIII, along with The Cherry Orchard). Next season, however, marks a sharp turn. Opening with the rarely satisfying The Comedy of Error(I have only once had the pleasure of enjoying this early Shakespearean comedy), they continue with Racine’s Phaedra (the five act dramatic tragedy of epic Grecian proportions); the oft-misunderstood and complicated Measure for Measure; the fantastical (though odd selection of) God’s Ear; and finishing with Henry IV, Part 2, featuring one of the largest casts in all of Shakespeare’s play and one of the lesser-performed histories. While I withhold judgment into the fall, I will relish their surprising and delightful tenth season and hope that they assess this season’s strengths and possibilities for future seasons.