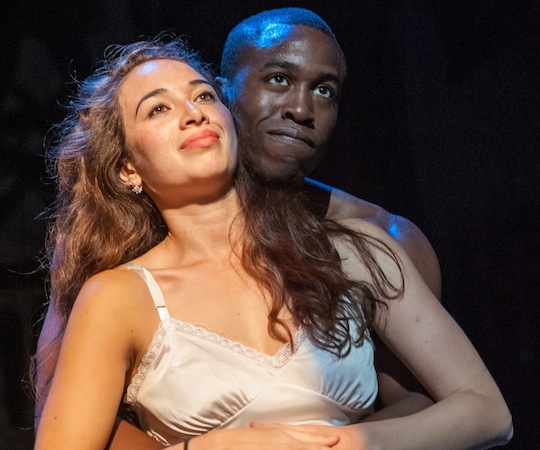 I have strong feelings about Romeo and Juliet. There, I said it before and I’ll say it again. I always wait with baited breath during the Prologue to see how this new production will interpret this timeless classic. Sometimes, I leave merely disappointed; other times, I leave damned confused. Actors’ Shakespeare Project’s production leaned towards the former for me. They didn’t do anything egregiously wrong; their use of race was tastefully and thoughtfully executed. One of the issues, however, was that they were, dare I say, safe and boring. That’s not to say that the production was boring. No, ASP knows how to do Shakespeare and their cast can tell a story through Shakespeare’s words and characters. I call the production “star-crossed” because things seemed disjointed rather than a fluid production or concept. I went into the production expecting more.

Leading the cast, Jason Bowen as Romeo and Julie Ann Earls are good. Not great, but good. I still believe that both characters should be cast as young as possible to carry the excitement and youth of the performance. I thought Bowen was a little dull as Romeo, never fully capturing Romeo’s exuberance once he meets Juliet. He felt too grounded, too safe, too secure, and I never quite bought into his joys and sorrows. Perhaps Bowen has transitioned from the young lovers (Orlando, Romeo, Ferdinand) to the older lovers (Berowne, Benedick). Bowen is definitely an accomplished and talented Shakespearean actor, but he just didn’t persuade or move me. Earls is a talented young actress, hitting many of Juliet’s highs and lows with ease. She has lovely chemistry with Paula Langton’s Nurse and, especially, with Miranda Craigwell’s Lady Capulet. I was slightly disappointed in the final scenes; Juliet carries much of “Act II” in modern productions. Earls accomplishes some of the best moments as Juliet that I’ve seen in recent productions, but fails to commit fully to the necessary urgency. Luckily, they have some chemistry that carries them through most of the show with one of the most gravity-defying balcony kisses that I’ve seen.

And yet, the supporting cast stole the show for me. Craigwell’s Lady Capulet is a wholly reimagined interpretation of the role. Craigwell is regal and incredibly sexy as Lady Capulet, a departure from the drab and maternal Lady Caps that I’m accustomed to seeing onstage. Langton’s Nurse seems to drag in “Act I” with the comedy never quite hitting the right notes for me, but her “Act II” passion and emotion sold me on her talent as an actress and artist. Langton knows how to emote perfectly and her Nurse took some beautiful chances as she made some clever choices. Unfortunately, I was never fully invested in Maurice Emmanuel Parent’s Mercutio. Like Bowen, Parent is an accomplished Shakespearean actor who knows hot to deliver. And like Bowen, he may have outgrown the youthful exuberance of Mercutio. Everything felt heavy; it felt loaded with turmoil, even in the early scenes. Perhaps Parent made the choice that Mercutio had lived a hard life on the streets, perhaps the production wanted a more West Side Story feel to the warring families. I’m going to respectfully disagree with that decision and move on. Talented, yes; hit the mark for me, no.

It’s an odd performance when Benvolio/a swept me off my feet. Few actors recognize Benvolio’s importance (he/she is one of the few remaining characters at the end of the show). Benvolio/a receives some key moments in the show, including explaining Mercutio and Tybalt’s death, and Romeo and Juliet’s deaths. In fact, much of the play could be viewed from Benvolio/a’s eyes as a “neutral” bystander who loses his friends and family to this hopeless feud between the families. Paige Clark is a star. I can’t find the words to express her dynamic and poignant presence onstage, or the beauty of her Benvolia.  I’m fascinated by the directors’ decisions to cast Benvolio as a female. I’ve seen it done before, but never to such great effect. Clark’s willingness and ability to go for the tough choices and decisions help her succeed in such a lackluster and oft-overlooked role. Clark’s chemistry with Bowen and Parent are beautiful reminders of the importance of male/female friendships, and these relationships bring new dynamics to the three friends’ interactions, particularly in the Queen Mab scene. Clark is talented beyond her years and I look forward to future opportunities to see her command the stage with her clever choices, star quality, and fearless acting.

Two of ASP’s leading artists direct the production. Bobbie Steinbach and Allyn Burrows established their brilliance and mastery of Shakespearean plays through their work over the years. However, something is missing or muddled in this production. Romeo and Juliet never gets the urgency needed to sell the ending. There seem to be too many uncontrolled, unfocused ideas in this production’s concept. I didn’t have a clear idea of location (Venice? New Orleans? Post-apocalypse?). One explanation for this vague and muddled production could be that, between the two masterful directors, the production just had too many good ideas to be contained in one production. They needed to trim down, focus more, and let the music of Shakespeare’s text speak for itself. Despite these criticisms, the production is very moving, the cast is (mostly) talented and adept, and the story remains as one of the great love stories and tragedies on the stage. In their tenth season, Actors’ Shakespeare Project is pulling out all of the stops for their season, starting off with this production of Romeo and Juliet. I can’t wait to see what else they have in store.